Please ensure Javascript is enabled for purposes of website accessibility
Log In Help Join The Motley Fool
Free Article Join Over 1 Million Premium Members And Get More In-Depth Stock Guidance and Research
By John Ballard – Jun 26, 2020 at 8:45AM

Both video game leaders are enjoying momentum right now, but one is set up for more growth over the next five years.

Shares of video game makers Activision Blizzard (ATVI -0.38%) and Take-Two Interactive (TTWO 3.48%) have seen rising prices year to date. Activision stock has returned 28%, ahead of Take-Two's 17% return, and both are outpacing the flattish 2020 return of the S&P 500 index.

Over the last five years, Activision stock has climbed 200%. It released Overwatch in 2016, which went on to sell 50 million copies; launched Overwatch League to cash in on the esports craze; and spent $5.9 billion to acquire top mobile-game maker King Digital Entertainment, of Candy Crush fame.

Meanwhile, Take-Two stock has soared 411% over the last five years. Sales of Grand Theft Auto V continue to climb, with the latest tally at 130 million units. In 2018, the company also launched the highly anticipated Red Dead Redemption 2, which has sold 31 million units so far.

Both companies are well-positioned for growth in the video game industry, but Take-Two has clearly been the best stock to own in recent years. Can it continue to outperform? 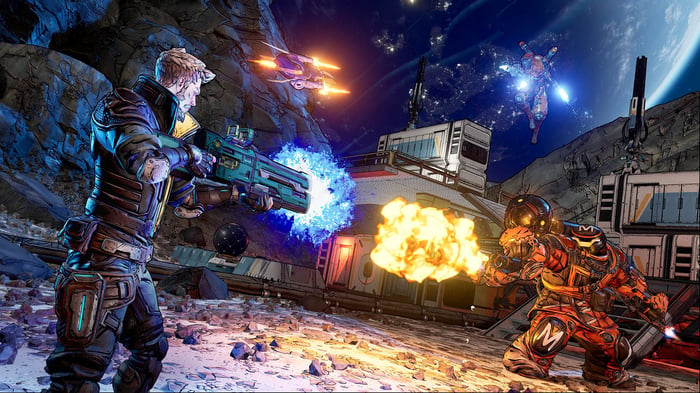 Activision and Take-Two are both coming off solid quarters, thanks to a strong slate of titles and shelter-in-place mandates over COVID-19.

One reason Activision Blizzard stock is outperforming year to date is the momentum with the Call of Duty franchise. Since being launched last fall on PC and console, Call of Duty: Modern Warfare has gained more players than any previous version in the series through the first quarter. Engagement is through the roof, with in-game net bookings for Modern Warfare more than doubling year over year compared to Black Ops 4 (2018). Management credited the launch of Call of Duty: Warzone, a free-to-play title that was released in March, for driving higher interest in Modern Warfare.

Analysts currently expect Activision Blizzard to grow revenue and adjusted earnings by 12.2% and 22.5%, respectively, in 2020. Management has a great opportunity to continue monetizing the 102 million monthly active users in the Activision segment with ongoing content updates for the trio of Call of Duty titles, including Call of Duty: Mobile. Plus, the Blizzard side will be launching a new World of Warcraft expansion, Shadowlands, later this year, in addition to a new premium Call of Duty for console and PC this fall.

Take-Two just closed the books on fiscal 2020 in March on a high note. Revenue and earnings per share increased by 16% and 21%, respectively, for the year. For that, management credited the usual suspects: NBA 2K20, Grand Theft Auto (GTA) V and GTA Online, and Red Dead Redemption 2 and Red Dead Online. Other titles get an honorable mention, including Borderlands 3, Sid Meier's Civilization VI, The Outer Worlds, Socialpoint's mobile games, and the WWE franchise.

Take-Two expects revenue and net cash from operations to dip in fiscal 2021 due to a light year for new releases. It plans to release the remastered Mafia: Trilogy from its catalog, as well as Disintegration from its Private Division label, which was just released on June 16. Later this summer, the 2K sports label will launch PGA Tour 2K21. But none of these will move the needle like a new GTA or Red Dead game.

Given the light slate, analysts expect Take-Two to report a decrease in revenue and adjusted EPS of 9% and 28%, respectively, in fiscal 2021 ending in March.

Activision has more near-term business momentum thanks to the Call of Duty franchise. But there are two reasons why I favor Take-Two.

First, Take-Two is poised to have a monster next-generation cycle with the new consoles. Its new partnership with the NFL will see new football games starting in 2021. There could be other surprises. During the last conference call, CEO Strauss Zelnick said, "We have an array of titles that will begin to launch in fiscal 2022, which we expect to drive sequential growth that year."

And second, Take-Two announced it has 93 new titles planned for release over the next five years through fiscal 2025, with 47 of these from existing franchises, and 46 from new intellectual property. This could mean new titles from major franchises, such as L.A. Noire and the critically acclaimed BioShock series, all made for the new super-duper PS5 and Xbox Series X (not to mention the inevitable release of Grand Theft Auto VI).

Activision Blizzard has some things up its sleeve, too, including Overwatch 2 and Diablo 4, and mobile reimaginings of existing franchises. But when comparing next year's growth estimates, Take-Two looks like a better growth stock than Activision. 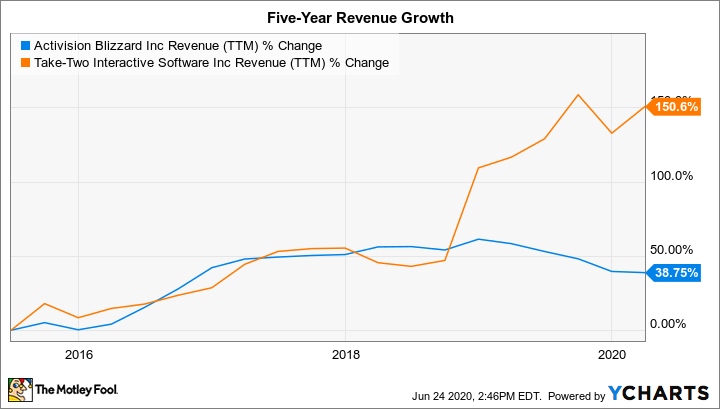 Take-Two should be able to maintain faster revenue growth over the next five years because it will be releasing several new games, and it's growing off a smaller base of revenue. The company just crossed $3 billion in sales last year, compared to Activision's $6.5 billion.

Both stocks trade around a forward P/E of 25 times next year's earnings estimates. I expect Take-Two to execute well on its pipeline, especially because its Rockstar Games studio has a reputation for taking its time to get games right. The 2K studio recently announced it was delaying the release of the next WWE title to improve the experience and expand its WWE offerings, which fits the company's plan to build scale and grow the business.

Take-Two stock has significantly outperformed the broader market and its peers over the last five years, and I expect that to continue. I own shares of all the top gaming leaders, but my largest video game holding is Take-Two, which gets my vote for the better buy.