Please ensure Javascript is enabled for purposes of website accessibility
Log In Help Join The Motley Fool
Free Article Join Over 1 Million Premium Members And Get More In-Depth Stock Guidance and Research
By Chad Henage – Jun 26, 2020 at 10:00AM

Some people may think that all online companies will benefit from stay-at-home orders, but this is truly a case of the strong get stronger.

When it comes to stay-at-home orders, part of the population is still anxious about going out, the other part seems to be going stir crazy. In a world where little seems certain, e-commerce has leapt forward. While companies like Amazon.com (AMZN -0.68%) and eBay (EBAY -1.50%) are both benefiting from this trend in the short term, there are several reasons that Amazon will be the long-term winner.

The rising tide lifts all ships or the strong get stronger?

The coronavirus pandemic is reshaping the retail industry, at least in the short term. According to research from eMarketer, U.S. e-commerce sales in 2020 are expected to increase by 18% annually. In stark contrast, retail sales are projected to decline by more than 10% year-over-year. To put the online sales growth in perspective, during 2019, U.S. online sales grew by 14.9%. In addition, research from Digital Commerce suggests that e-commerce penetration increased each of the last nine years. 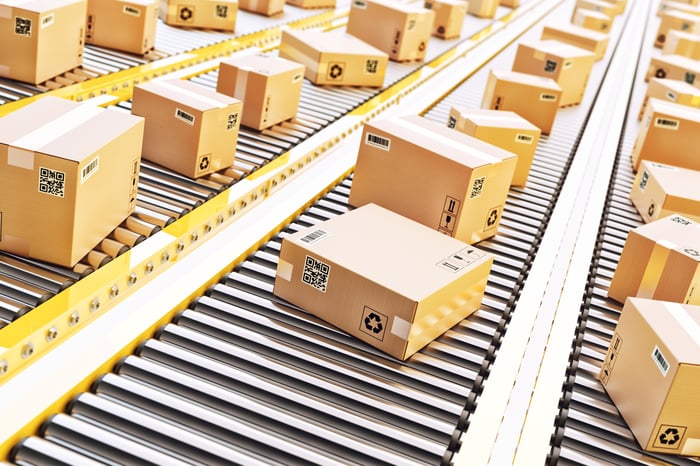 It seems clear that online shopping is gaining traction each year. While overall sales are increasing, there is a dominant force in e-commerce in the U.S., and that is Amazon. The eMarketer study found that Amazon took 38% of U.S. e-commerce sales in May. Somewhat surprisingly, Walmart (WMT -0.08%) took second place at 5.8% and eBay finished third at 4.5%.

There are more than a few key differences between Amazon and eBay, but one of the most prominent is Amazon Prime subscription. An RBC survey of 2,800 consumers found that 64% of Amazon customers made at least two or three purchases a month, up from 54% in the year prior. Nearly half of these respondents said they spent more than $200 on the site in the last three months.

Amazon Prime subscribers are some of the most loyal buyers on the site. Amazon confirmed it had 150 million Prime members in January, and some analysts believe this figure could be approaching 200 million. Keep in mind, these are just Prime members, Amazon's total member count is likely much larger.

In Prime membership alone, Amazon witnessed a more than 30% increase in membership in roughly half a year, based on those estimates. To give investors a sense of how massive this growth is, during the first quarter, eBay's entire registered membership grew 2% annually, yet growth was flat sequentially. In short, while Amazon may be gaining tens of millions of paying subscribers, eBay's growth in total members is tepid at best.

Part of the appeal of Prime membership is the company's free fast shipping, specifically the move toward one-day or even same day delivery. Even eBay knows this is a key purchasing factor saying that buyers are, "more likely to choose an item with free shipping over an item with a shipping charge even if the total cost is the same." While eBay gives suggestions like offering free shipping or providing expedited shipping, the third-party seller ultimately decides what to do. In addition, eBay sellers have the option to add a handling time of multiple days to their listings, which can delay fulfillment even further.

On the Amazon front, the company's Fulfilled by Amazon (FBA) service is a significant benefit to sellers with the company picking, packing, and shipping items for third-party sellers. According to the site BigCommerce, FBA gives sellers a 30% to 50% increase in sales.

The thought process isn't hard to understand. Prime members look for "Shipped By Amazon" or "Prime" knowing they will get their item as quickly as possible. eBay posted last year announced a service called Managed Delivery that would launch in 2020 The company focused on lower fulfillment costs and speedy delivery. However, by December 2019 the program was quietly ended. According to a report from the San Jose Business Journal, consultants tied to eBay essentially said the conclusion was you can't compete with Amazon when it comes to fulfillment.

eBay knows that fast and free shipping is a key purchasing factor, yet it decided it couldn't go head-to-head with Amazon and is leaving that challenge up to its sellers. Given Amazon's significant lead in e-commerce, and its more effective shipping options for third-party sellers, this seems to be the definition of a durable competitive advantage.

Amazon leads the race for U.S. online sales, and in multiple cases, the company offers better pricing and faster shipping. Outside of the business of selling products, Amazon seems to offer investors a far more attractive growth profile in other areas as well.

eBay's focus on its marketplace business is both a blessing and a curse. The company is reportedly looking to sell its Classifieds business, which reportedly could be worth $10 billion. When eBay sold its StubHub business early this year, it increased its share buyback plan. Investors might be excited about what eBay would do with $10 billion. While buybacks are a great thing for investors in the short-term, eBay will be left with just its core marketplace business. On the one hand, eBay marketplace is highly profitable, on the other hand, eBay has little control over its inventory and growth is tepid at best.

In the most recent quarter, eBay marketplace's active buyer growth was the slowest of the last five quarters at an increase of 2%. Last year at this time, active buyers increased by 4% annually. Beyond the company's challenging user growth, one of eBay's main growth measures is gross merchandise volume (GMV).

Where eBay's future growth is unclear, Amazon seems to have an overabundance of growth engines. Most people know that Amazon Web Services (AWS) is a significant growth engine for the company. In the last quarter, AWS grew sales by more than 30% for the sixth time in the last six quarters. Amazon's third-party seller services revenue jumped by 30% annually, and the company's other business witnessed a more than 40% revenue increase.

Though both Amazon and eBay are benefiting from the pandemic, Amazon seems to be the long-term winner. Better prices and faster shipping are the hallmarks of the company brand. Whether it's online sales, AWS, third-party services, or advertising, Amazon seems to be firing on all cylinders. Investors looking for a fast-growth stock shouldn't be afraid to pay up for Amazon shares.