Please ensure Javascript is enabled for purposes of website accessibility
Log In Help Join The Motley Fool
Free Article Join Over 1 Million Premium Members And Get More In-Depth Stock Guidance and Research
By Billy Duberstein - Jun 26, 2020 at 7:15AM

While the overall technology sector has been booming of late, there are still some individual names that haven't achieved the massive runs that many software and cloud stocks have seen. Though it's up about 50% from its March lows, Micron Technology (MU -1.62%) stock is still over 20% below its February highs. It also trades at just 1.5 times book value, which is extremely low for a technology company.

The shares currently trade for around $49 per share. Micron just had one sell-side analyst reiterate his price target of $100 per share, over 100% upside form its current price. One would be hard-pressed to find an analyst projecting as much upside for another tech stock, given the Nasdaq's huge run over the past few months.

Another analyst also has a $35 price target on Micron, or 30% downside from these levels. The extremely wide range shows the inherent uncertainty in Micron's earnings power. Is Micron potentially a huge winner in the year ahead or will it continue to lag the tech sector? 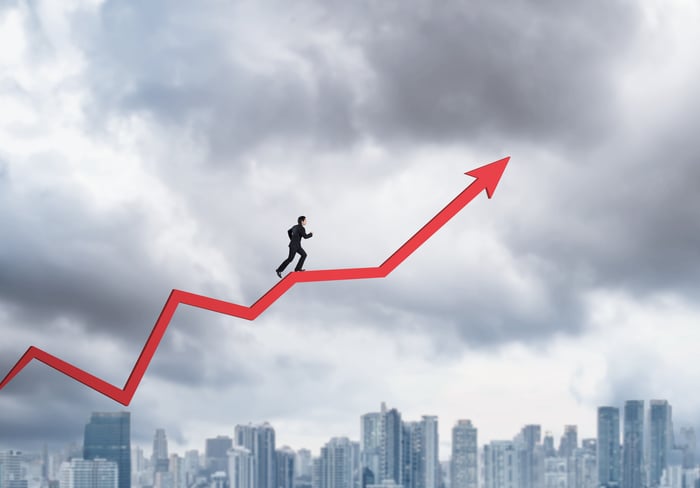 On Tuesday, June 22, Rosenblatt Securities analyst Hans Mosesmann reiterated his buy rating on Micron and his $100 per-share target. Mosesmann had originally raised his price target to $100, up from $80, last December 2019, pointing to Micron beginning to come out of the bottom of the memory downcycle, which had started in the latter half of 2018.

At the time, Mosesmann wrote:

We recommend MU as a strong buy (and increase our 12-month price target from $80 to $100) with the bonus, in this cycle, of a company that is executing successfully (within a framework of keeping supply in-line with demand), improving the product stack to non-commodity sticky memory varietals, delivering 50% FCF [free cash flow] return to investors, and sporting investment grade credit ratings from the three key credit agencies.

All of what Mosesmann said about Micron remains true. The company has continued to proceed with its technology transitions while not adding wafer capacity, which increases production efficiently without oversupplying the market. Micron has also transitioned much of its NAND output to managed NAND, which is packaged with DRAM and thus higher margin than commodity NAND bits.

As recently as 2018, less than 50% of Micron's NAND was in higher-margin, high-value solutions. Today, the company's high-value NAND solutions make up 70% of its total NAND output, with a target of 80% by next year.

Micron also used the windfall of the memory boom of 2017-2018 to bolster its balance sheet, leading to an increase in its credit ratings. As recently as the fourth quarter of 2016, Micron had $5 billion in net debt. Less than four years later, Micron has $2.7 billion in net cash on the balance sheet.

Micron has also set a policy of returning at least 50% of its free cash flow to shareholders in the form of share repurchases. While Micron's free cash flow hasn't been very impressive in the past couple of quarters due to the memory downcycle, it was still positive in the company's most recent quarter, which management said would be the trough of the cycle. Micron's cost improvements have increased its operating cash margin by 25 percentage points, compared with the prior downcycle, when it had traditionally posted losses. That's a huge improvement.

On the other hand, bearish analysts point to the fact that we're in a recession, and Micron doesn't control the price at which it sells its memory products, which fluctuate with supply and demand. Analysts at Citigroup (C -0.37%) have a $35 price target on the company, which equates to just over the company's book value per share.

Micron has traditionally not fared very well in recessions, and there are concerns out there that demand will dry up in the second half of the year as the economy begins to feel the pinch from the coronavirus. In fact, some analysts think that this year might not even be the trough of the memory cycle, and that we'll have a "double-dip" as demand dries up.

What's strange is that each analyst appears to view Micron in relatively the same way, but each seems to value its earnings power wildly differently. That's because Micron is a cyclical company, with uncertain earnings from year to year. Taking a 10,000-foot view, here's how Micron has fared over the past five years, along with estimates for the next two:

As you can see, Micron's earnings power is uneven. In fact, while Micron's average EPS estimate for fiscal 2021 (ending in August 2021) is $4.72, analysts have wildly different outlooks for next year, with the most pessimistic forecasting just $1.90 per share and the most optimistic forecasting $10.20 per share.

What will make or break Micron's stock

If one thinks Micron won't be able to grow average earnings meaningfully above that average figure going forward, then a $35 price may be justified. However, over the longer term, Micron has consistently improved its profitability profile, making higher highs and higher lows with each cycle. If this year ends up being the low for the company's earnings, it will have improved its trough-year earnings from ($0.27) in 2016 to $2.50 in 2020. That seems to bode well for more improvement in the years ahead -- especially if the company can buy back a lot of stock in the next upcycle, which would lower its share count.

As such, while anything can happen in the near term, I think the Micron bulls have the edge over the bears over the longer term. Good things are in store for patient investors in Micron's low-priced stock.