Please ensure Javascript is enabled for purposes of website accessibility
Log In Help Join The Motley Fool
Free Article Join Over 1 Million Premium Members And Get More In-Depth Stock Guidance and Research
By Will Healy – Jun 26, 2020 at 7:00AM

Amid the coronavirus pandemic, Domino's Pizza (DPZ -1.14%) is a success story many investors have seemingly overlooked. Focused on takeout since its founding in 1960, the company has been operating from a position of strength throughout the pandemic-related lockdowns.

With the return of customers to sit-down restaurants, some investors may be concerned that Domino's higher sales levels could fall back. However, with coronavirus cases on the rise again, Domino's stock could benefit if the massive sales surge continues.

Domino's mostly benefited from the lockdowns

Though it's safe to say this was never the intent, Domino's business model is nearly ideal for a pandemic where large segments of the population are being urged to stay home. As primarily a delivery and takeout operation, it does not have much of a dine-in business to lose.

Its only major sales reductions came from lost business in stadiums and concert venues as organizers canceled events. International sales also struggled as lockdowns forced the closure of takeout restaurants.

However, the pandemic undoubtedly helped Domino's as takeout became the only dining option outside the home for millions of people. The increased interest in takeout is evident in Domino's recent sales numbers. U.S. sales rose 7% in the first four weeks of the second quarter. In weeks five through eight, that rate of increase grew to 20.9%. 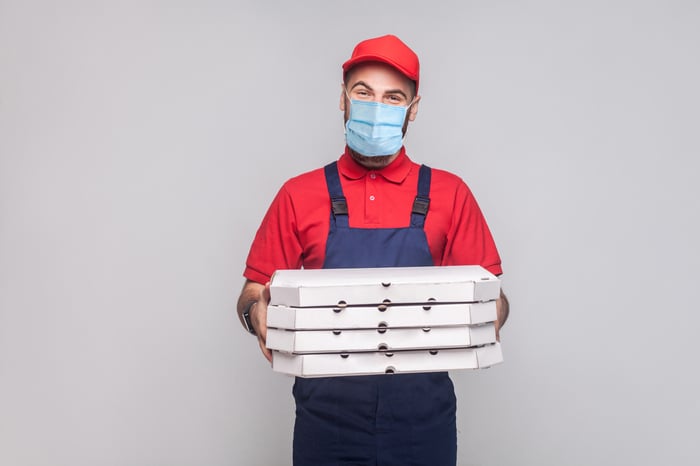 The lockdowns could return

Still, as much as the increased interest in takeout helps during the pandemic, it also calls into question how the company has performed since sit-down restaurants began to reopen. During the first quarter of 2020, the company saw global retail sales growth of 5.9% year over year, which excludes the impact of foreign currency. Most of the sales growth came from expansion. Same-store sales growth amounted to only 1.6% in the U.S. and 1.5% internationally over the same period, a time mostly unaffected by the pandemic.

A return to normal could take sales growth back to similar levels. However, amid reopenings and protests, many U.S. states have seen a resurgence in cases over the last few weeks. Moreover, officials fear a full-blown second wave when temperatures turn colder in the fall. Some states have suspended further reopenings, and the Centers for Disease Control and Prevention has warned that the rising number of cases could prompt a second lockdown.

However, such news could benefit Domino's stock, which has neither risen nor fallen significantly since late April. More lockdowns could mean that sales levels remain elevated for a longer time. In such a scenario, Domino's could become a stock of choice if investors need a safe haven to avoid another massive drop in the market. 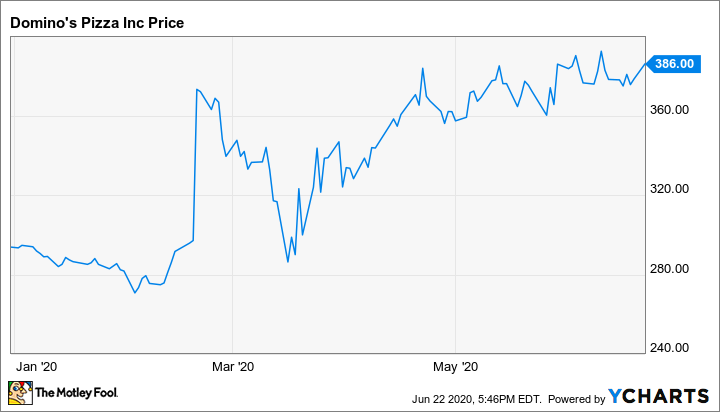 The rise in Domino's sales levels has led analysts to forecast earnings increases of 18.6% for the current fiscal year. This is significantly above the predicted yearly average for the next five years of 12.3% per year.

Additionally, the current dividend yield of just over 0.8% is probably not going to draw in new investors. However, the payout has risen every year since the company began dividends in 2013. Because the dividend increased by 20% last year alone, it could give investors an added incentive not to sell.

Nonetheless, the massive sales surge during the pandemic is the incentive that gained the most recent attention. Though many sit-down restaurants have reopened, a rise in cases and a second wave later in the year could bring people back to Domino's. Whether you buy pizza from Domino's or invest in this consumer discretionary stock, the company looks poised for continued profit growth.