One analyst thinks the biotech's shares have come too far too fast.

Shares of Inovio Pharmaceuticals (INO -3.39%) declined on Friday after investment bank Stifel cut its rating on the biotech stock.

Stifel analyst Stephen Willey reduced his rating on Inovio's shares from buy to hold. Willey believes that after the stock's incredible gains in 2020 -- the stock is up a staggering 797% so far this year -- the risk-to-reward equation for investors is now "less palatable." 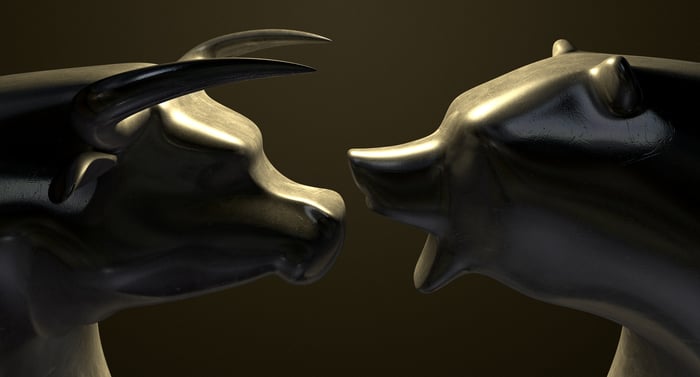 The bears and bulls are battling over Inovio's shares. Image source: Getty Images.

Although Willey did raise his target price for Inovio's stock from $19 to $24, his new price forecast represents potential downside of 20% based on Inovio's closing price of $29.98 on Friday.

Not all analysts are bearish on Inovio's stock, however. On the same day that Willey cut his rating to hold, Cantor Fitzgerald analyst Charles Duncan reiterated his "overweight" rating on Inovio's shares and boosted his target price from $17 to $45. After studying the company's clinical programs and meeting with management, Duncan came away with a more bullish view of Inovio's vaccine development potential.

As is often the case with early-stage biotech companies, analysts can have far different views. Ultimately, investors will need to decide for themselves whether they're bullish or bearish on Inovio's future prospects.