Please ensure Javascript is enabled for purposes of website accessibility
Log In Help Join The Motley Fool
Free Article Join Over 1 Million Premium Members And Get More In-Depth Stock Guidance and Research
By Royston Yang – Jun 27, 2020 at 6:41AM

The technology giant has finally begun using its processors in its iMacs.

When it comes to its track record of smartphone innovation, Apple (AAPL -1.26%) stands as the market leader. Since its introduction back in 2007, the iPhone has kickstarted a new industry and spawned numerous copycat designs. Thirteen years later, the company is still growing steadily and seeing its share price hit new all-time highs, almost tripling from the level it traded at five years ago.

The company has built up a strong following of loyal fans who scramble to grab the latest models of iPhones and iPads as soon as they are released. It's uncommon to witness such deep devotion to a technology company, in an era when people are increasingly spoiled for choice among gadgets. Apple has something unique and special going for it that endears people to its products and services.

Here are three great reasons to own part of this technology business. 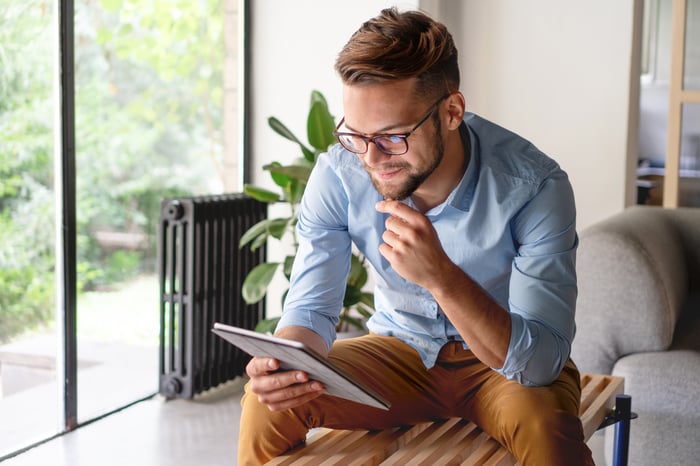 Apple had just concluded its Worldwide Developers Conference, an event held annually to showcase the company's latest technology and new software. CEO Tim Cook announced that Apple will begin using its own ARM-based processors instead of Intel's (INTC 0.89%) chips in its MacBook Pro and iMac computers.

These new chips will allow Apple to have more control over its chips and align the internal architecture for its computers with that of its iPhones and iPads. Although there may not be any immediate benefits arising from this transition (which will take two years to complete), the company pointed to improved power consumption and better processing power as benefits. That may happen, but it's good to see Apple pivot away from reliance on a third-party vendor and going in-house. This move not only cuts down on overall manufacturing costs but also helps to streamline and improve Apple's supply chain for its iMacs.

Over the years, Apple has proven that it can continuously innovate and introduce new features into its products. The once-a-year announcement of new models for its signature iPhone and iPad is met with eager anticipation, and people have come to expect the company to come up with brand new features to enhance its product offerings. Apple also released the Apple Watch back in 2015, and it quickly became one of the world's best-selling wearable devices. This culture of innovation and inventiveness keeps customers coming back for more and encourages repeat purchases from its loyal fan base.

For the iPhone 12 that is slated to be released later this year, the expectation is for big changes: a new look and design, plus added functionality.  For the sixth iteration of the Apple Watch, rumors are swirling about a new stand-alone fitness app that can provide guided workouts for a variety of different activities. Native sleep tracking may also be on the cards, but the battery life for the Apple Watch may need to be ramped up significantly for it to last through the day and night as well.

These supposed new features are hotly anticipated, and Apple being at the forefront of such leading innovations makes the company's products all the more attractive to its growing customer base.

With iPhone and iPad sales showing inconsistent year-over-year growth in recent years, Apple is now focusing its attention on growing its services division. This is an astute move, since it will reduce Apple's reliance on selling and marketing of products (which suck up significant sums of money each year) and pivot the company toward more subscription-based revenue, which is more stable and also stickier by nature.

The services division consists of services such as Apple TV+, Apple Pay, and Apple News. Users spent more than half a trillion dollars within Apple's app store in 2019, showcasing just how much money the platform attracts.

For the first half of the 2020 fiscal year, Apple reported a 16.7% year-over-year increase in revenue for its services division to $26.1 billion. This division made up 17.4% of total revenue, up from 15.7% during the same period a year ago. This underscores the increasing contribution from services, and over time, this proportion is set to increase even further as Apple releases more subscription-based services. With services commanding more than twice the gross margin of products, this shift should see Apple's margins slowly creeping up over time.