Please ensure Javascript is enabled for purposes of website accessibility
Log In Help Join The Motley Fool
Free Article Join Over 1 Million Premium Members And Get More In-Depth Stock Guidance and Research
By James Brumley – Jun 27, 2020 at 9:00AM

The company is on solid footing, but the stock itself is looking a bit rich, given the foreseeable future.

It's enticing, to be sure. Food company Campbell Soup (CPB -0.21%) is a key beneficiary of coronavirus lockdowns that still have most restaurants only half-open. Meanwhile, should those lockdowns lead into a job-killing recession, eating inexpensive food at home will remain a necessary choice for many consumers. It seems Campbell can't lose. Jefferies' analysts even said as much a few days ago when they recommended Campbell and rival Conagra after finding most consumers plan to eat at home more even after COVID-19 is in the rearview mirror.

This is one of those cases, however, where the underlying story is right but the timing is all wrong.

No opportunity in the obvious

Like most of its consumer goods peers, Campbell Soup ran into the perfect storm in 2017. The industry's pricing power was waning, but its costs remained firm. Shipping expenses and other logistics were chewing away at already-thin margins. 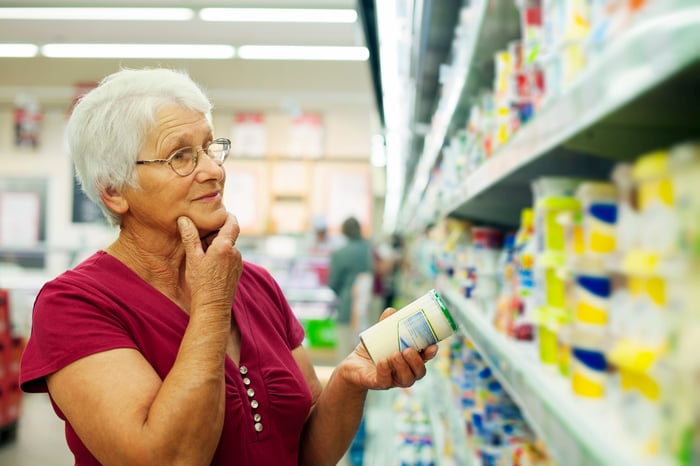 Most of those food companies successfully regrouped -- including Campbell -- allowing them to enter the coronavirus headwind on solid footing. The company was ready to deliver (figuratively and literally) in an unprecedented situation. Organic revenue for the three months ending in April was up 17% year over year, and non-generally acceptable accounting principles (non-GAAP) earnings per share soared 57%.

Investors saw it coming well before the company posted those numbers in early June. Campbell Soup's stock was one of the few that actually rallied in late February when other names were selling off after COVID-19 made landfall in the U.S. It struggled a little in March but moved back to record-high territory by May. It's now one of only a relatively small number of names now priced above February's peak.

And that's the problem. Investors appear to have priced in a heroic future that won't quite be as heroic as the price presently implies.

That's not to suggest it won't be a good one. It'll be OK. The dividend isn't in jeopardy. Profits, rather than losses, remain on the horizon. But there's something largely overlooked in the midst of positive analyst comments. The same analyst community is still modeling shrinking revenue for the remainder of this year and next, despite the strong likelihood that many consumers plan to keep eating more meals at home. Per-share profits aren't expected to sustain their recent growth pace either. 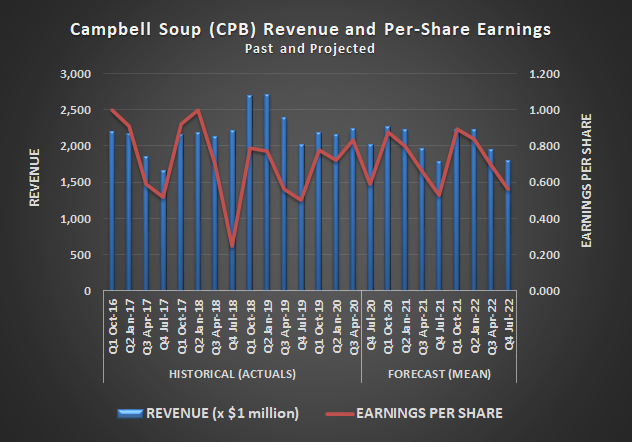 Moreover, assuming this fiscal year's per-share earnings estimate of $2.93 and next year's figure of $2.85 are on-target, Campbell stock is trading at around 17 times its trailing and forecasted earnings. That's not terrible, but it's above its 2018 average right before Mark Clouse was named CEO and took over a turbulent but necessary overhaul. He's spent more on marketing, for instance, but has culled other costs to offset that marketing investment; 2019 isn't the best year to use for comparison. 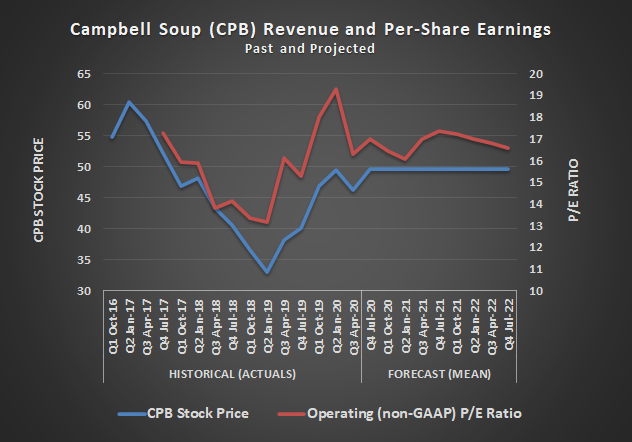 Don't misread the message. Campbell Soup is a quality company. Clouse has been able to implement some much-needed changes since taking the helm. The packaged food business isn't easy. Under Clouse, Campbell is doing everything it should be doing, and doing most of what patient shareholders have hoped it would someday do.

Now's not the time though to buy Campbell stock. While trying to time the market and entries or exits of stocks often ends up costing more than it saves, in this case, potential Campbell Soup investors have a good, clear reason to wait. As an alternative, investors looking for a food name to own right now may want to consider one of the three food picks Motley Fool contributor Will Ebiefung suggested late last month.