Please ensure Javascript is enabled for purposes of website accessibility
Log In Help Join The Motley Fool
Free Article Join Over 1 Million Premium Members And Get More In-Depth Stock Guidance and Research
By Zhiyuan Sun – Jun 28, 2020 at 6:17AM

After a $1.4 billion merger, can Invitae become an industry leader in genetic testing and cancer diagnostics?

In the past three months alone, shares of genetic testing company Invitae (NVTA -4.69%) have soared by 90%. In fact, the company's shares outperformed the S&P 500's return of 25% by nearly five times during the same period. At this rate, investors may be wondering: Could Invitae be a million-maker stock?

As it turns out, this is one of the few times in the investment world when something sounds too good to be true, but isn't. I think Invitae's share rally has more fuel left and is likely to enrich long-term shareholders for years ahead. 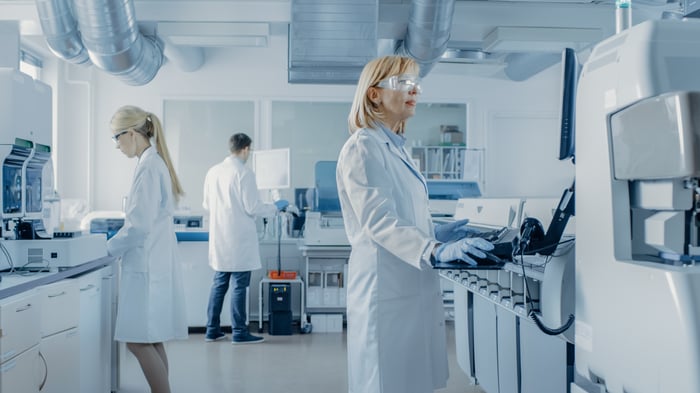 Invitae is a genetic testing provider for disease diagnostics (such as cancer and cardiovascular diseases), genome network construction, and genome management. In the first quarter of 2020, the number of specimens received by its laboratories grew to 154,000, representing a 64% growth over the same period of last year. However, when the coronavirus pandemic struck the U.S., clinics and hospitals began prioritizing their resources to prevent the spread of SARS-CoV-2. As a result, the volume of diagnostics tests submitted to Invitae fell by as much as 50% in the last two weeks of March alone.

Unfortunately, the number of coronavirus cases is not subsiding in the U.S. In the past few days, over 30,000 Americans have been diagnosed with coronavirus each day, which rivals records set in early April. If states begin to reimpose quarantine and lockdown restrictions, diagnostic testing of non-COVID-19 illnesses would surely become materially impacted, as would Invitae's revenues.

On the upside, Invitae has a significant catalyst to offset coronavirus woes. On June 22, the company announced it would acquire cancer diagnostics company ArcherDX for $325 million cash and 30 million shares of stock, plus an additional 27 million shares based on performance milestones, for a total of $1.4 billion.

In 2019, ArcherDX generated about $50 million in annual revenue, representing 75% year-over-year growth from 2018. The company has 325 unique products and more than 50 partnerships with biopharma companies to advance its pipeline.

Also, ArcherDX has two unique products that could become game-changers in cancer treatment: Personal Cancer Monitoring (PMC) and StratafideDX. PMC allows healthcare providers to access cancer patients' genomes directly in their laboratories. Currently, fewer than 1% of cancer patients receive genome profiling, which is critical in detecting the possibility of relapse or remission after treatment. The global market opportunity for cancer genome profiling is estimated by ArcherDX to be $40 billion, spanning across 16.5 million patients.

Meanwhile, StratafideDX could potentially become the first in vitro diagnostic product (a lab test) for late-stage cancer that can accept both blood or tissue samples and conduct universal DNA/RNA analysis, all in one test. The global market opportunity for late-stage cancer detection is estimated by ArcherDX to be $5 billion across 3.2 million patients.

Is Invitae a good stock?

Combined, Invitae and ArcherDX are expected to generate $316 million in annual revenue, with a 43% gross margin, 50% to 60% yearly revenue growth, and a net loss of $130 million in 2020. These growth metrics are certainly not bad for a company with a market cap of $3.5 billion.

Overall, I expect Invitae to become a leader in genetic testing and cancer diagnostics after the merger. While testing for severe diseases was largely viewed as an elective procedure during the first wave of the coronavirus pandemic, I doubt patients can further delay their checkups. Hence, Invitae's revenue may rebound as the second wave of coronavirus strikes the U.S. Aside from short-term woes, I believe Invitae is an excellent biotech stock that can enrich long-term investors.