After over a decade of trying to chase Apple's retail success, the software giant is throwing in the towel.

Shortly after giving up on live-streaming, Microsoft (MSFT -0.20%) is doing likewise with retail. The company announced last week that it would be permanently closing all physical retail stores in a major strategic shift, thus ending a decadelong experiment in replicating Apple's (AAPL 0.23%) success in retail. The first Microsoft Store opened in October 2009, nearly 11 years ago.

Here's why the software giant is pulling the plug on its stores. 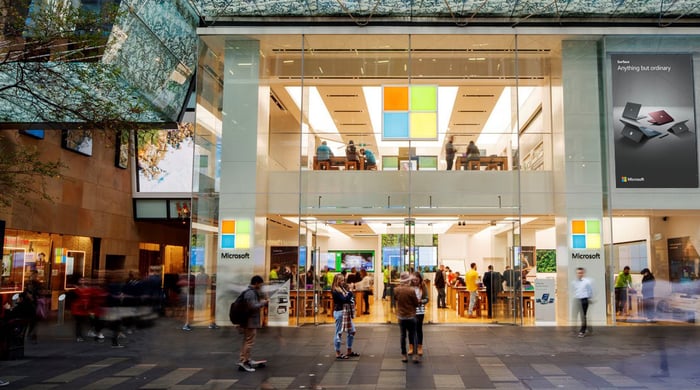 Four locations will be repurposed

Like many retailers, Microsoft stores have been crushed by the COVID-19 pandemic. Locations have been closed since March as a result of various virus-related lockdown orders, and none have reopened even as some local restrictions have eased. Employees have still been able to assist customers, including average consumers and enterprise customers, remotely with virtual training and support calls.

Only four locations in London; New York City; Redmond, Washington; and Sydney will remain open, but they will be repurposed as Microsoft Experience Centers instead of traditional retail stores. Microsoft expects to eat a pre-tax charge of approximately $450 million, or $0.05 per share, in the second quarter.

Microsoft told The Verge that it would not be laying off any employees as a result of the decision. Instead, those workers will transition to other corporate offices where they will remotely work on sales, training, and support. Accordingly, the aforementioned pre-tax charge should relate primarily to things like lease terminations and other associated costs instead of severance or termination benefits.

"Our sales have grown online as our product portfolio has evolved to largely digital offerings, and our talented team has proven success serving customers beyond any physical location," Microsoft exec David Porter said in a statement. "We are grateful to our Microsoft Store customers and we look forward to continuing to serve them online and with our retail sales team at Microsoft corporate locations."

It was always clear that Microsoft was hoping to emulate Apple. The stores were designed to look almost identical to Apple stores, including the use of minimal aesthetics and overall layout. Microsoft often positioned them in close proximity to Apple stores. But Microsoft was never able to achieve the same level of success. Foot traffic was always uninspiring, and the company has never provided much financial detail around the segment.

Apple, on the other hand, often tops retail rankings for sales per square foot. Apple is trying to reopen its stores as local conditions permit, but the Mac maker has had to reclose stores in certain states where coronavirus cases are spiking.