Please ensure Javascript is enabled for purposes of website accessibility
Log In Help Join The Motley Fool
Free Article Join Over 1 Million Premium Members And Get More In-Depth Stock Guidance and Research
By Adria Cimino – Jun 30, 2020 at 7:36AM

Elements from the past, present, and future are reasons to be optimistic about this biotech star.

Some stocks have just one problem: Once you've bought them, you never want to sell them. That's the case with Vertex Pharmaceuticals (VRTX 0.46%), a biotech company with a leading position in the area of cystic fibrosis.

Vertex's shares have climbed 35% this year to trade near a record high. As the coronavirus outbreak has weighed on business across industries, the impact on this company has been limited to slowdowns in certain clinical trials. Vertex actually revised its cystic fibrosis revenue estimate for the year -- upward. 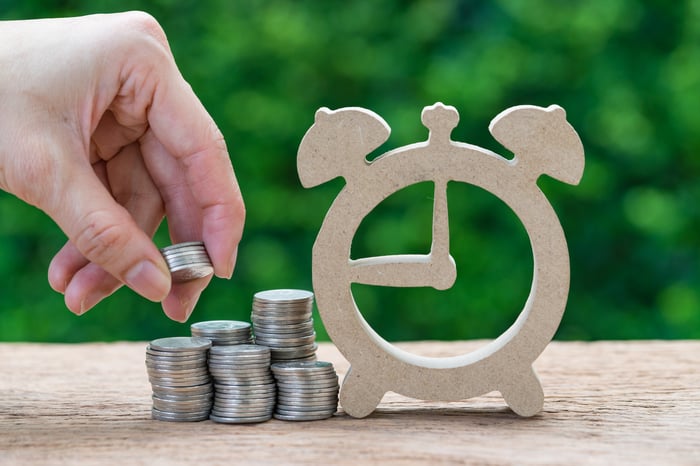 Beyond this winning performance, here are three reasons to grab Vertex now and hang on for the long term.

Vertex was already a leader in cystic fibrosis with three marketed products when a fourth, Trikafta, was approved in October 2019. In the third quarter of 2019, just before Trikafta's launch, the company's cystic fibrosis drugs generated a combined $950 million, a 21% increase from the year-earlier period. Trikafta immediately leaped ahead. In its first full quarter on the market, the drug's $895 million in sales represented 60% of product revenue. In Vertex's most recent earnings call, the company predicted that Trikafta will drive revenue growth in the coming years.

What makes Trikafta such a winning product? This combination therapy, which includes elexacaftor, tezacaftor, and ivacaftor, may treat up to 90% of cystic fibrosis patients worldwide, Vertex says. Trikafta addresses the underlying cause of the disease in patients with the most common genetic mutation.

Trikafta is clearly a blockbuster in the making. Along with Vertex's other cystic fibrosis drugs, it's creating a long-term growth story. Vertex's cystic fibrosis treatments may generate more than $10 billion in sales by 2028, according to Morningstar. That's compared to $4 billion last year.

Gene and cell therapies involve introducing genetic material or living cells into the body to produce a therapeutic effect. Last year, Vertex took steps to solidify its presence in this promising area. The company announced a research center dedicated to the program, acquired gene-editing specialist Exonics Therapeutics, and expanded its partnership with CRISPR Therapeutics (CRSP -1.58%).

Using expertise from Exonics and CRISPR, Vertex is boosting its gene-editing program for the treatment of Duchenne muscular dystrophy and myotonic dystrophy type 1. In gene editing, DNA is changed -- or literally "edited" -- in order to treat disease. It's wise of Vertex to pursue this therapeutic technique now. At a 25% compound annual growth rate, the global gene-editing market is expected to reach $4.4 billion by 2023, according to BCC Research. Grand View Research forecasts that the market will hit $8 billion by 2025.

3. A track record of earnings surprises and revenue increases

Vertex's annual revenue has increased steadily since 2015. As for earnings, they have soared past analysts' estimates in the past four quarters. For instance, in the most recent quarter, earnings per share came in at $2.56 compared with the average forecast of $1.84.

History isn't always indicative of the future. One small issue facing Vertex is that its up-and-coming therapies are all in phase 2 studies, or in earlier review stages. So we can't expect new drug approvals in the near term.

That said, Vertex's cystic fibrosis platform is strong enough to power the company along until earlier-stage programs bear fruit. Considering Vertex's recent approval of Trikafta, and the drug's hugely successful debut, it's reasonable to expect revenue to climb moving forward.

Vertex is trading at 51 times trailing-12-month earnings, and the shares have surpassed Wall Street's average price target by about 3%. By comparison, other profitable biotech companies like Amgen (AMGN 0.34%) and Gilead Sciences (GILD 0.21%) trade at just under 20 times earnings. So, Vertex isn't cheap. Still, for the three reasons above, I think this biotech stock has plenty of room to move higher over the long term.