Please ensure Javascript is enabled for purposes of website accessibility
Log In Help Join The Motley Fool
Free Article Join Over 1 Million Premium Members And Get More In-Depth Stock Guidance and Research
By Matthew DiLallo – Updated Jun 30, 2020 at 9:38AM

The oil giant is slowing restarting its oil pumps as prices improve.

ConocoPhillips (COP 7.07%) expects to ramp back up to its full production capacity in Alaska during July. The company had previously shut-in 100,000 barrels of oil production per day (BPD) in the state during June due to lower oil prices. But with oil bouncing back to around $40 a barrel, these resources are now economical to produce again.

ConocoPhillips had also previously shut-in production during May and June in the lower 48 states, Canada, and Malaysia due to low oil prices. Overall, it curtailed 265,000 BPD in May and 460,000 BPD in June (100,000 of which was in Alaska).

The company plans to start bringing some of this output back on line in the coming months. It will begin by turning some wells in the lower 48 region back on during July. It also plans to restart some of its curtailed output at the Surmont facility in Canada during the third quarter. The company stated that it intends to make "economically driven production decisions at the asset level in the months ahead." 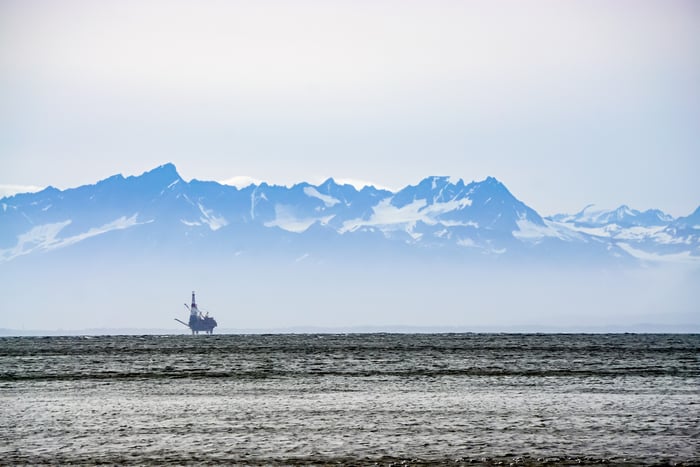 An offshore oil platform in Alaska. ConocoPhillips plans to restart production in the state in July. Image source: Getty Images.

The oil company's decision to curtail some production in May and June will impact its overall output during the second quarter. It currently estimates that production volumes will average between 960,000 and 980,000 barrels of oil equivalent per day (BOE/D), a sizable decline from the 1.278 million BOE/D produced during the first quarter.

But after adjusting for asset sales and those voluntary production curtailments, its output is even with the year-ago period and 5% below the first quarter's level. That sequential decline is due in large part to seasonal turnaround activity when the company takes some assets off line to perform annual maintenance.