Please ensure Javascript is enabled for purposes of website accessibility
Log In Help Join The Motley Fool
Free Article Join Over 1 Million Premium Members And Get More In-Depth Stock Guidance and Research
By Zhiyuan Sun – Jun 30, 2020 at 11:39AM

A year from now, investors who buy shares of this bargain cannabis company will likely be rewarded for their courage.

With all of its facilities in Canada up and running, Aphria's (APHA) potential production capacity for dried cannabis will soar to 255,000 kilograms per year. With an average selling price of CA$5.46 per gram in the most recent quarter, that seems like it would make make Aphria a huge cash flow machine that will deliver riches to shareholders.

But there's a catch: As it turns out, while Aphria produced over 31,000 kilograms of dried cannabis in the third quarter of 2020, it sold nowhere near that amount. In fact, the market gobbled up less than 15,000 kilograms of the company's cultivated cannabis. At this rate, the company only needs about 60,000 kilograms of annual production capacity. The discrepancy has some investors wondering whether Aphria will fall victim to countless goodwill write-offs and material impacts to its business because of oversaturation in the Canadian marijuana market.

Thankfully, shares of Aphria have been so oversold that even if the above risk factors materialize, investors will still be able to grab them with a wide margin of safety. 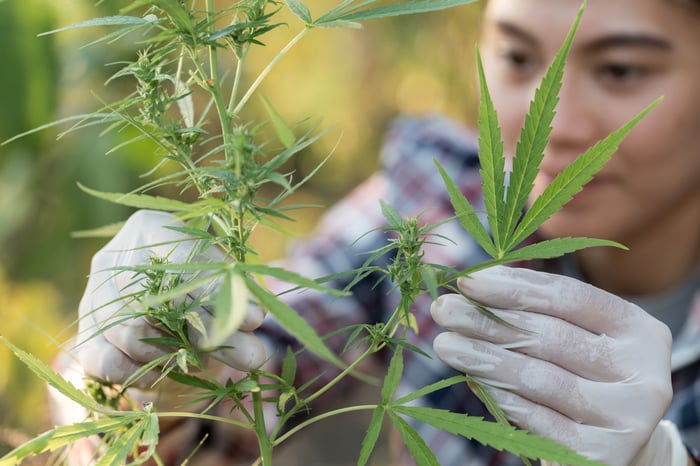 In the past nine months, Aphria generated CA$391 million in total revenue, which is more than triple the CA$108.5 million it generated in the same period in fiscal year 2019. Moreover, the company recognized more than CA$14 million in net profits in the same period -- a significant figure considering that most large-cap cannabis companies are not currently profitable. These metrics are impressive for a company with a market capitalization of just CA$1.3 billion.

By all indications, the growth streak is not likely to end. Preliminary sales data shows that demand for marijuana soared as COVID-19 swept across the world. In U.S. states that aren't heavily tourist-dependent, such as Washington and Oregon, marijuana sales have increased by 30% to 58% in May alone. As a result, I believe Aphria's stock will be a great hedge in today's tough environment.

Even if COVID-19 does materially affect Aphria's business, I'm confident that the company will be able to thrive. For starters, out of its CA$2.6 billion in total assets, only CA$669.7 million are classified as goodwill. Goodwill represents the premium a buyer pays for an acquired company's book value. It can face severe writedowns if the underlying business does not perform as expected. Even if that happens with Aphria's acquisitions, the company still has over CA$1.2 billion in shareholder equity minus goodwill.

Currently, Aphria has the highest quarterly revenue among six leading competitors in the Canadian marijuana industry. Aphria is the only company in that group currently generating a positive operating income and adjusted earnings before interest, tax, depreciation, and amortization (EBITDA). Meanwhile, the company is on track to generate revenue of over CA$500 million this year. Again, it only has a market capitalization of $1.3 billion.

In other words, Aphria's price-to-sales ratio stands at just over 2. That is a ridiculously cheap price to pay for a cannabis company, especially one that has managed to turn a profit. I think Aphria's growth streak is far from over. Its shares will likely stage a sharp rebound to enrich many investors in the cannabis industry.