Please ensure Javascript is enabled for purposes of website accessibility
Log In Help Join The Motley Fool
Free Article Join Over 1 Million Premium Members And Get More In-Depth Stock Guidance and Research
By Leo Sun – Jun 30, 2020 at 9:00AM

Slack takes a bold step towards replacing e-mails for external communications -- but will it widen its moat against its biggest competitor?

Slack Technologies' (WORK) collaborative platform is mainly known for connecting employees within a single company. However, it recently introduced Slack Connect, a new set of tools that will allow companies to collaborate with external partners in real time.

Slack has been developing Connect for four years, and over a million users at more than 41,000 customers -- including Airbnb, Box, Autodesk, and Wayfair -- have tested it in recent months. If officially launched the paid plans on June 24. 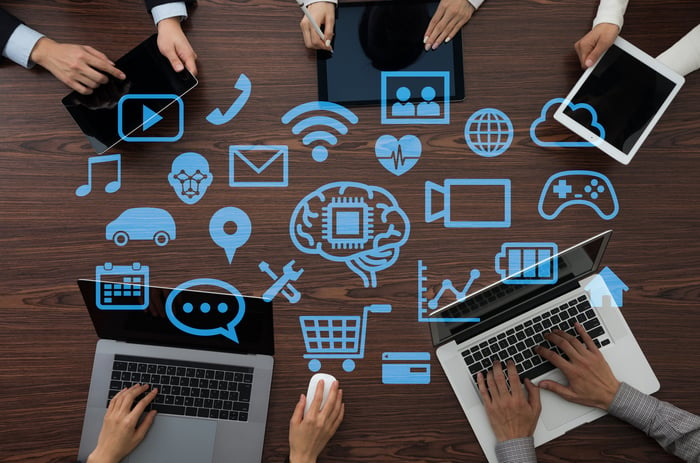 Slack Connect allows up to 20 organizations to collaborate with each other in chat, apps, and other integrated third-party services in shared channels. Slack says Connect will "replace email" by allowing companies to work more quickly and more securely with their external partners.

Slack chief security officer Larkin Ryder claims Connect will prevent organizations from losing "billions of dollars due to spam and phishing" scams that start with unwanted emails. That's a bold vision for the future, but will Connect shore up Slack's defenses against Microsoft (MSFT 1.36%) -- which is aggressively promoting its Teams platform as an alternative to Slack?

A new approach to business communications

Slack is often cited as a potential replacement for email, since it's designed as an internal network for employees. Linking those internal networks to each other is more secure than using company email addresses, which are vulnerable to external threats.

However, shifting away from traditional email is difficult, since it's become a standard communication tool over the past three decades. Companies can't simply abandon an older communication standard every time a better one appears -- that's why most companies still have phone numbers.

Can Slack's Connect widen its moat against Microsoft?

The stickiness of old technologies is a bane to Slack and a boon to Microsoft. Microsoft's dominance of PC operating systems with Windows, its leading position in the productivity software market with Office 365, and the growth of its Azure cloud infrastructure platform all form a firm foundation for Teams -- which launched as a new Office 365 feature three years ago.

Teams topped 75 million daily active users (DAUs) last quarter, and it benefited from the surge in remote work throughout the COVID-19 crisis. Slack doesn't regularly disclose its DAUs every quarter, but it claimed to top 12 million DAUs last October.

That gap indicates Microsoft's bundling strategies are paying off, and it could keep attracting more users to Teams with free offers and promotions. Slack remains deeply unprofitable, and its cash reserves could dwindle in a prolonged battle against Microsoft -- even with the support of major clients like Amazon and IBM.

Moreover, Microsoft is monitoring and securing email inboxes with Mimecast's cloud-based spam filters. That upgrade could be good enough for many enterprise clients, and prevent them from adopting a more streamlined solution like Slack Connect.

Slack Connect represents an impressive step toward replacing traditional email, but its adoption could be throttled by two issues.

Second, Microsoft can easily replicate Connect's features in Teams, then integrate them into its broader ecosystem of email and other Office 365 services. That versatility could be more attractive to customers that are heavily dependent on email but willing to dabble with streamlined services like Teams.

Slack Connect offers a clearer vision of the company's future and might silence the critics who don't believe it can ever replace email. However, Slack's revenue growth is still decelerating, it faces tough competition, it's unprofitable, and its stock looks frothy at 21 times this year's sales.

Slack Connect could increase the stickiness of its ecosystem and boost its revenue per customer, but it's unclear if it will actually widen its moat against Microsoft -- which still offers enterprise customers a much broader range of communication tools.