The electric vehicle space is getting crowded, and the entire industry's stocks can't soar forever.

Electric vehicles have been a long-held dream for many, and for investors, the right investments have been extremely lucrative. EV pioneer Tesla (TSLA 4.37%) came public a decade ago, and it's produced amazing returns for those who got in on the ground floor. Now, a host of other companies are emerging to stake their claims to the fast-growing industry.

Workhorse Group (WKHS 1.70%) hasn't gotten a lot of attention until recently, but its stock has been publicly traded for more than 10 years, and it's seen its share of ups and downs over that period. Most recently, the stock price has soared from just $2.50 per share at the end of May to as much as $19 on June 30. Bulls are excited about the prospects for the company, but they need for Workhorse to accomplish some key things in order to justify the stock's big move higher.

1. Workhorse needs to get moving on van production

Workhorse's bread-and-butter product is its line of all-electric delivery vans, which come in 650 cubic foot and 1,000 cubic foot sizes. In late June, the company announced that both vans had successfully completed federal motor vehicle safety standard testing. That set the stage for Workhorse to move forward with its production timeline for the rest of 2020. 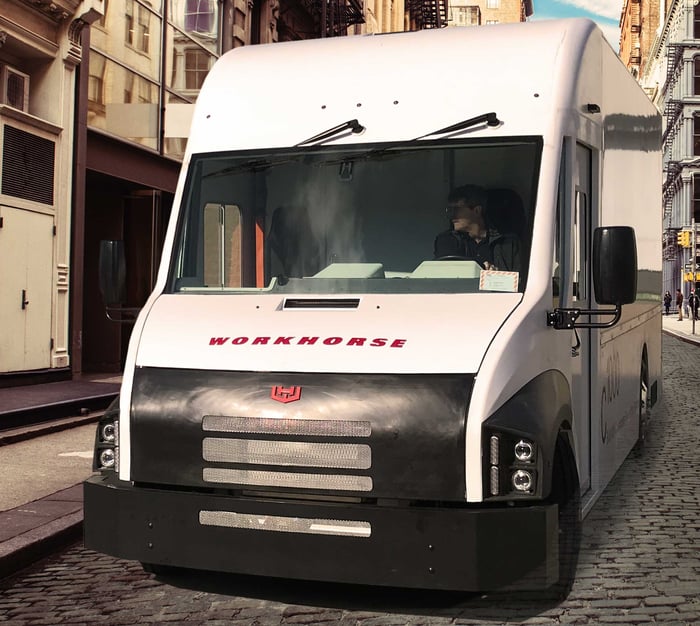 CEO Duane Hughes has said that Workhorse expects to sell between 300 and 400 vans by the end of the year. It'll be important for Workhorse to use its sales partnership with Ryder System (R 0.37%) to get those vehicles moving as soon as possible. That way, investors will be able to see the revenue potential that Workhorse's vans have -- and start to get a proof of concept on other potential products down the road.

In order to grow, Workhorse will need more capital, and a big rise in the stock price is always an opportunity to tap capital markets. The mistake many companies make, however, is diluting their existing shareholders too much, either by selling stock at below-market prices or by including equity sweeteners like warrants that can give investors the right to pick up shares on the cheap in the future.

So far, Workhorse seems to be making smart moves. The company just announced a $70 million financing deal that involves convertible bonds paying 4.5% interest and offering a conversion right at $19 per share. That's well above where the stock was when the deal went through, and it's a reasonable way to obtain valuable cash without costing current shareholders too much of their upside.

3. Workhorse's collaboration with Lordstown Motors needs to pay off

Workhorse's fortunes have been linked with those of privately held Lordstown Motors since before Lordstown even existed as an operating entity. Ever since Lordstown bought out its production facility from General Motors (GM 0.75%) and former Workhorse CEO Steve Burns left to lead Lordstown, investors have seen the potential for their collaboration to be extremely profitable for both parties. Workhorse owns about a 10% stake in Lordstown.

Lately, Lordstown has looked to ramp up its own production prospects, with ideas for battery-electric work vehicles that would use Workhorse technology. Those products could include a pickup truck, and that's a niche that has gained a lot of traction between Tesla's Cybertruck and the Badger pickup from Nikola (NKLA 3.30%). If Lordstown is successful, it will help provide additional revenue for Workhorse and boost the value of its stake, and that could prove to be a significant part of the opportunity for Workhorse shareholders.

Time to hit the gas

Workhorse Group has another big opportunity to boost its prospects, and a flood of new investors think that this time will be the charm for the electric vehicle company. Nevertheless, Workhorse still needs to execute well in order to make good on its full potential and keep competitors at bay.