I made a terrible call on Boston Beer (NYSE:SAM) back in November when I said it was trading at an unrealistic price. It was expensive -- but the company has made the right moves to expand its offerings at a time when craft beer is oversaturated. Seltzers and the Dogfish Head acquisition have put Boston Beer right where consumer preferences are right now. Even though the stock is more than 50% higher today than it was in November, I think it's worth a look.

Not a beer company anymore

The important thing to understand about Boston Beer is that it's no longer a craft beer company. It's a miniature alcohol conglomerate. The company's flagship Samuel Adams line of beers has struggled in recent years. The incredible increase in the number of craft beer brands in the U.S. has siphoned market share potential for Sam Adams, making Boston Beer very much a victim of its own success. Moreover, weakening interest in beer has been an added issue. 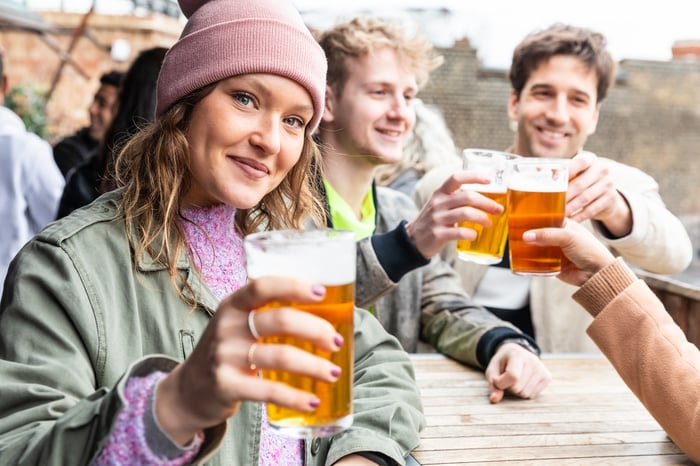 To reinvigorate growth, Boston Beer has looked to other areas -- principally, hard seltzers and sweeter drinks. The father of American craft beer owns brands like Twisted Tea and Truly Hard Seltzer. Most recently, the company acquired Dogfish Head, another well-established craft brewer. That acquisition, coupled with Truly Hard Seltzer, is what led to revenue growth last year. Depletions (sales to distributors) were up 36% in the first quarter, with 30% of that increase stemming from Boston Beer legacy brands. About 6% came from the Dogfish Head brands.

CEO Dave Burwick noted that the strength within 2020 first-quarter results came from more increases in Truly Hard Seltzer, Twisted Tea drinks, and the addition of Dogfish Head. Once again, there were declines in Angry Orchard and Samuel Adams brands that "partially offset" the growth of depletions.

As I said, Boston Beer isn't necessarily a beer company anymore. That's not necessarily a bad thing. Beer popularity has been decreasing in recent years as consumers seek to cut calories. Tastes have been shifting toward other products that include spiked seltzers. This positions Boston Beer nicely with its Truly Hard Seltzers.

Sitting in the right place

Overall, I like the stock. The company has a good balance sheet, with $129.5 million in cash and short-term investments at the end of the first quarter. New shares are rarely issued, which keeps one's investment from being diluted, and the product lineup even gives some credence to the idea that Boston Beer could get bought out at some point.

When I touched on Boston Beer last year, I felt the stock was too expensive. Shares are still trading at a pretty significant premium. Last year's diluted earnings of $8.52 per share give the stock a trailing price-to-earnings (P/E) ratio of 65. That's not a cheap stock. What makes it appealing is the growth potential of the company. While estimates are still murky right now, analysts are calling for earnings of around $9.79 per share this year and $13.42 per share next year (which would be a forward P/E ratio of about 41).

Much of this will be predicated on how the dynamic between seltzers, Dogfish Head brands, and Samuel Adams brands shapes up. But overall, Boston Beer made a good move in increasing its footprint outside of its flagship brand. That move certainly seems to be paying off. The stock is worth a look.