The COVID-19 pandemic has caused something of an exodus out of the cities and into the suburbs. Redfin just reported that the percentage of homebuyers looking to relocate is at a record. The Census Bureau just reported that new home sales are up 12.7% from a year ago. Homebuilder Lennar reported a strong recovery in traffic and orders as well. But then, KB Home (NYSE:KBH) reported disappointing order growth. This environment should be picture-perfect for homebuilders. So what is going on? 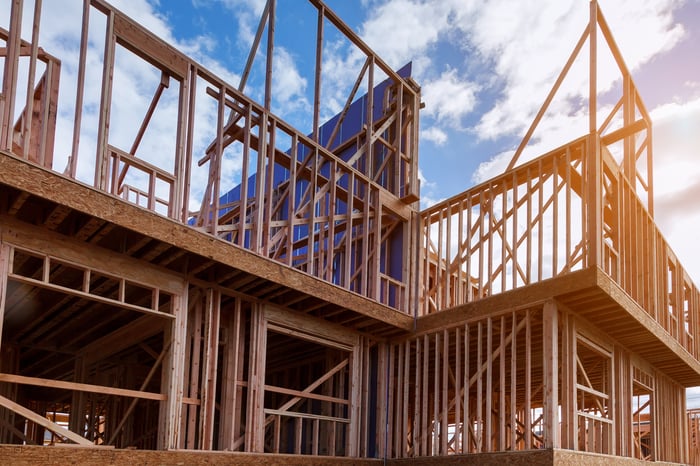 Earnings per share rose but orders were weaker than expected

KB Home reported earnings of $0.55 per share for the quarter ending May 31. That was higher than the Street's estimate, but revenues fell over 10% and orders disappointed. Following the earnings release, KB Home stock fell about 12%. CEO Jeffrey Mezger had this to say about the quarter:

The prolonged stay-at-home public health orders, resulting economic shutdown and our conservative approach to navigating the uncertain environment significantly impacted our orders during the quarter. However, following a low point in April, we are very encouraged by the resilience of housing market demand. We experienced steady and significant improvement in our order trends beginning in May, which was further fueled by welcoming walk-in traffic to our communities. This improvement has accelerated dramatically in the first three weeks of June during which time we have achieved a modestly positive year-over-year comparison, as orders have returned to more normalized levels.

Why were KB Home's orders so disappointing?

June orders were up 4%, but that's unimpressive compared to Lennar's 20% increase. Gross orders were down 4% in March, 59% in April, and 42% in May. The cancellation rate for the quarter increased to 43% from 15%. The increase in order cancellations may have been due somewhat to KB Home's business model of "build to order." It is a lot easier for a customer to cancel an order on a house that hasn't even been started. Certainly social distancing and self-imposed customer traffic limits made the in-person back-and-forth process of designing a home more difficult, which was another reason for the low order growth. Geography also played a role, with Orlando and Las Vegas suffering from a drop off in tourism, and some of KB Homes' bigger markets in coastal California shutting down early.

Pricing is holding up

On the plus side, it seems like pricing is holding firm and gross margins increased by 100 basis points. KB made no changes to its incentive program during the quarter. Usually in a recession, builders will cut prices to move inventory built on spec (or homes that have been built but not sold). Average selling prices were flattish year over year, and the first time homebuyers accounted for almost 60% of sales.

Obviously, one should not read too much into one homebuilder's experience; it looks like most other builders are seeing stronger improvements. Toll Brothers reported that deposit activity (a leading indicator for order growth) increased 13% in May. This means KB Home's issues are not necessarily an indication that the housing market is rolling over. Housing is an early-cycle industry, so it should be strong coming out of a recession. Inventory has been tight for years now, and the COVID-19 pandemic has amplified peoples' desires for open space and less-crowded living. We will get a much better read on the housing market after some of the builders with traditional fiscal years report in a month. For now, it looks like KB Home is the outlier.