If you only looked at stock performance, you might conclude that Inovio Pharmaceuticals (NASDAQ:INO) is a better coronavirus stock than Moderna (NASDAQ:MRNA). While Moderna's share price has more than tripled so far in 2020, Inovio stock has skyrocketed more than 700%.

But year-to-date stock performance isn't the best way to choose between two stocks. There's a strong case to be made that Moderna is actually the better pick of these two coronavirus-focused biotech stocks. Here are three reasons why -- plus one reason why Moderna is less attractive than Inovio. 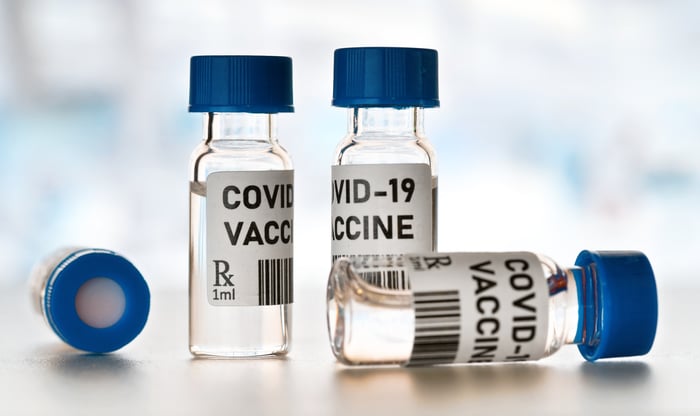 1. Moderna's COVID-19 vaccine is ahead

The most obvious reason that Moderna beats Inovio is that its COVID-19 vaccine candidate is ahead of Inovio's candidate. Moderna's mRNA-1273 is currently in a phase 2 clinical trial. The biotech expects to begin a pivotal phase 3 study in July. Inovio reported positive interim phase 1 data for INO-4800 on June 30, and hopes to start a phase 2/3 study this summer.

Granted, a head start in clinical testing doesn't necessarily mean that mRNA-1273 will ultimately be safer and more effective than INO-4800. However, if Moderna's late-stage study goes well, its lead in clinical progress could translate to greater commercial success.

Importantly, health officials recognize Moderna as a leader in the race to develop a COVID-19 vaccine in a significant way: The Trump administration selected only a handful of experimental COVID-19 vaccines to receive federal funding. Moderna's vaccine was on the list, while Inovio's wasn't. And recently, World Health Organization chief scientist Soumya Swaminathan pointed out two leaders in COVID-19 vaccine development. Again, Moderna was one of her picks, and Inovio wasn't.

2. Moderna's cash stockpile is much bigger

Neither Moderna nor Inovio is anywhere close to making a profit. This means that both biotechs are burning cash. But Moderna has a lot more to burn than Inovio does.

As of March 31, Moderna's cash stockpile stood at $1.7 billion, including cash, cash equivalents, and investments. The company also has up to $700 million in potential grants and awards. Last month, Moderna boosted its cash position even more, raising around $1.34 billion in gross proceeds from a stock offering.

Inovio's cash, cash equivalents, and short-term investments totaled $270 million as of March 31. Since then, the company sold shares to raise net proceeds of close to $122 million.

Inovio's pipeline might seem more impressive than Moderna's. Both biotechs have 15 candidates in clinical testing. However, Inovio has one late-stage candidate (VGX-3100), while Moderna has none. Nine of Inovio's programs are in phase 2, compared to only three for Moderna.

It's important to consider, though, that Inovio was founded in 1983 and still has no products on the market. That's 37 years and counting with no clinical success that ultimately mattered.

What about Moderna? It was founded relatively recently, in 2010. The company's messenger RNA technology excited investors so much that Moderna's initial public offering in 2018 was the biggest biotech IPO ever.

The bottom line is that Moderna's track record simply isn't as questionable as Inovio's. In one decade, Moderna has built a pipeline with as many clinical programs as Inovio has in nearly four decades.

But there's one really big advantage that Inovio holds over Moderna: valuation. Even after its huge gain in 2020, Inovio's market cap is only around $4.4 billion. That's less than one-fifth the size of Moderna's market cap of around $24 billion.

Either of these biotech stocks would skyrocket if its COVID-19 vaccine were successful. But with its smaller market cap, Inovio would almost certainly have more room to run than Moderna would.