Please ensure Javascript is enabled for purposes of website accessibility
Log In Help Join The Motley Fool
Free Article Join Over 1 Million Premium Members And Get More In-Depth Stock Guidance and Research
By Christine Williams – Jul 2, 2020 at 10:51AM

Undervalued and underappreciated, this collaboration platform has room to grow.

The era of widespread work-from-home policies has settled in, and increased reliance on online collaboration tools has fueled growth in many companies. Quiet first-mover Dropbox (DBX 0.93%) is no exception. It may not wow investors with its past financials, but Dropbox was one of the world's first cloud collaboration tools, and it still has potential to grow. 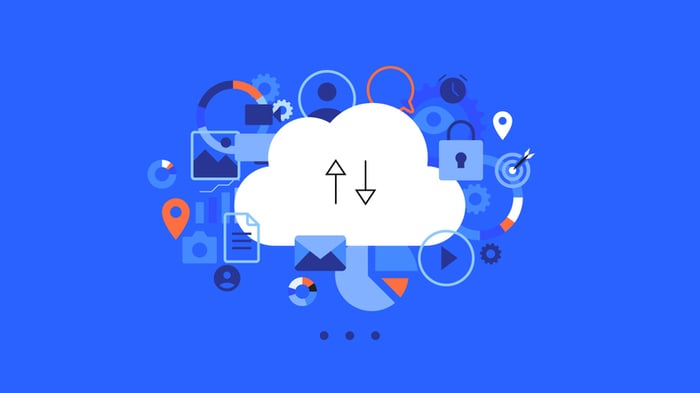 Most promisingly, Dropbox has proven its ability to convert free users to paying clients: Total users jumped to 14.6 million over the last year, and Plus individual plan conversion increased by more than 25%. Digging deeper, the company has even increased its average revenue per paying customer, which indicates a growing efficiency in its operations -- all supported by a corresponding increase in gross and operating margins. All of this has finally pulled the company into positive territory.

Debt and competition keep up the pressure

However, it has taken years for Dropbox to tip into profitability, and those years have cast a long shadow: The company has finance and operating leases of $1 billion. Luckily for Dropbox, minimum annual lease payments average around $100 million, a figure covered multiple times over by current operating cash flows. This means Dropbox has the liquidity to pay back its obligations while still allowing for additional expansion in the future.

The company might accelerate its growth by following a similar path as its rival Box (BOX -0.93%), especially in integrating with other collaborative working tools. Dropbox can now team up with Zoom on the video front and Atlassian on the enterprise side, and perhaps it will pull in more paying users that way. On the other hand, Dropbox lacks proprietary offerings that would prohibit its potential partners from rendering it obsolete.

Indeed, Dropbox appears to be banking on a two-pronged strategy: expanding offerings while increasing efficiency. Last year the company acquired password-management company Valt, which has allowed it to offer seamless logins and more robust security to answer ongoing consumer desire for convenience. Dropbox is partnering with and acquiring other companies, increasing its debt load, but recent history shows that it is clearly positioning itself as the one-stop shop for cross-platform storage.

Why is this important? Simply put, competition is high in the digital worksphere. Big-name companies like Google (GOOG -1.98%) (GOOGL -1.82%), Microsoft (MSFT -1.94%), and Apple (AAPL -3.00%) also offer cloud storage solutions, and they have the deep pockets to outrace smaller competitors. However, Dropbox has an advantage: the ability to cater to users of multiple platforms. By building upon this, Dropbox is able to differentiate and create a stronger value proposition for its customers.

Slow and steady growth makes for a comfortable hold

Given its growth and positioning in the market, Dropbox expects a surge in estimated future sales. Currently the company trades above $20 a share, a relatively cheap 4.7 times its estimated future annual revenue of $1.88 billion to $1.90 billion.

Even more enticingly, Dropbox has been continually improving its margins. For example, adjusted operating margins were 12% in 2019, while operating margins for 2020 are expected to range from 17.5% to 18%. 2020 revenue is forecast to rise 15% year over year, even when accounting for reduced consumer spending because of the coronavirus pandemic. CFO Ajay Vashee confirmed that by 2024, Dropbox expects to deliver more than $1 billion in free cash flow.

As such, it seems Dropbox is finally positioned for long and enduring profits. It has positioned itself as a neutral collaborator for content sharing and conversation, and it is primed for further partnership with big-name competitors in the software-as-a-service market. The company has proven itself a winner, focusing on broadening its offerings all while improving efficiency. With a somewhat cheap valuation right now, Dropbox clearly stands out as a comfortable bet for the long term.