The first half of 2020 was no fun for us investors in Universal Display (NASDAQ:OLED). The stock fell as much as 48% year to date in March and recovered with a 37% rise from that point to the market close on July 1. The plunge was deeper than the general market's 31% drop, and the rebound move was smaller. All told, Universal Display is trading 29% lower in 2020, but the general market stands just 4% lower over the same period.

Universal Display is a great buy at these low prices. Read on to see why.

What Universal Display does

Organic light-emitting diode (OLED) technologies are making their way into a number of mainstream markets right now. Once exclusive to high-end smartphones, OLED screens are now found in many midrange handsets and even a handful of downright affordable phones.

Prices on big-screen OLED television sets are coming down in a hurry, though the technology remains a bit pricey for these larger screens while Universal Display's manufacturing partners ramp up their next-generation OLED factories. The next step in the OLED evolution will bring flexible, ultra-thin, and power-sipping OLED lighting panels to the masses as a general replacement for older and less elegant light-generation technologies.

Universal Display reaps royalties from this expansion based on the total area of OLED-powered screens and light panels that are sold, and the company also acts as an exclusive reseller of patented materials manufactured by industrial chemistry giant PPG Industries (NYSE:PPG).

Where this company is going next

On top of the rapidly growing manufactured OLED area, Universal Display is working on its own materials to replace the blue pixels and host layers in current OLED solutions. The company could essentially double its revenue per OLED panel in this way, while the number and size of those panels continue to grow.

In short, Universal Display's growth trajectory ran into a speed bump caused by the COVID-19 pandemic, but the company's long-term business prospects have not dimmed at all. Panel-building partners Samsung (OTC: SSNLF) and LG Display (NYSE:LPL) are building and upgrading manufacturing lines to handle larger volumes of bigger OLED panels as we speak, and those products will hit the market in 2021 and beyond.

"Our OLED capacity model still calls for year-end 2021 installed capacity to increase by approximately 50% from the installed capacity at the end of 2019, as measured in square meters," CFO Sid Rosenblatt said in Universal Display's first-quarter earnings call. 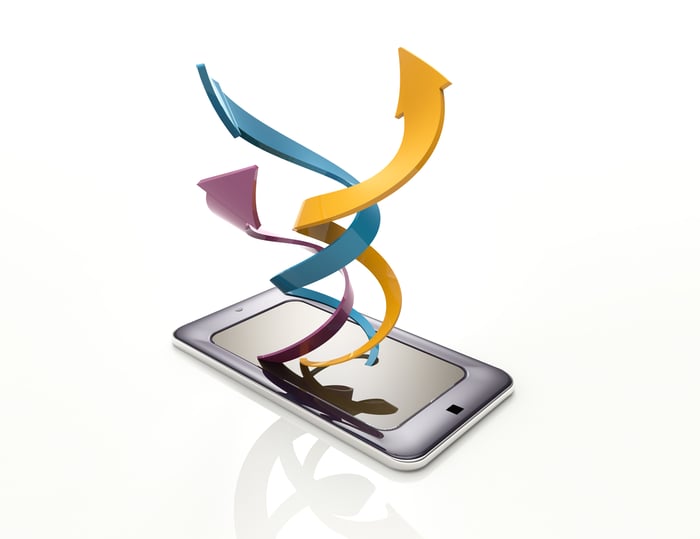 The upshot: It's time to buy Universal Display

Management withdrew its full-year guidance targets due to market uncertainty related to the coronavirus crisis, but that isn't a deal breaker for me. Universal Display could lose nearly half of its quarterly revenue and still report positive earnings. The debt-free balance sheet holds $639 million of cash equivalents and liquid short-term investments. These rock-solid financial reserves will carry Universal Display through the health crisis unscathed, even if the pandemic drags on for years.

The company feels stable enough that it decided to continue its dividend payouts in March and June at a time when many companies in every industry are pausing their dividends to conserve cash. In fact, Universal Display raised its quarterly payout by 50% in February and left it there in June. That's a solid vote of confidence for the company's long-term business prospects. Sure, the effective annual yield is quite modest at 0.4%, but this commitment to steady payouts is the stuff that future Dividend Aristocrats are made of.