Please ensure Javascript is enabled for purposes of website accessibility
Log In Help Join The Motley Fool
Free Article Join Over 1 Million Premium Members And Get More In-Depth Stock Guidance and Research
By Dan Caplinger – Jul 2, 2020 at 10:47AM

Market participants are having trouble reconciling different pictures of the economy.

Many market participants pointed to today's report from the Bureau of Labor Statistics about the employment picture in the U.S. for June as evidence that things are getting better. Yet at the same time, we got a rare opportunity to see first-time claims for unemployment benefits on the same day as the monthly jobs numbers, and the two seem to tell very different stories. It might seem tough to reconcile the two different sets of numbers, but they do create a single picture that could guide investors in what they should do next with their portfolios. 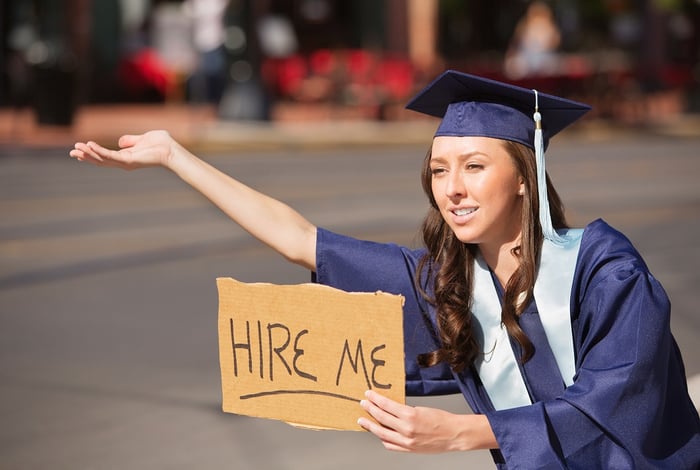 On one hand, the U.S. economy created millions of jobs in June, continuing its bounce from the worst of the coronavirus crisis. Total nonfarm payroll employment jumped by 4.8 million in June, and that sent the unemployment rate down by 2.2 percentage points, coming in at 11.1%.

Digging further into the numbers, those returning to work after having been on temporary layoff accounted for just about all the gains, with the total number of workers temporarily laid off falling from 15.4 million in May to 10.6 million in June. Labor force participation also rose, signaling that even those who had previously given up looking for work are starting to see at least the possibility of getting hired right now.

From an industry standpoint, the following areas were notable sources of new jobs during the month:

All of these signs point to a solid month of recovery. That likely explains today's optimism among stock market investors.

Unfortunately, as good as June's numbers were, they represented only incremental progress in clawing back past job losses. The number of unemployed people today is still 12 million higher than it was in February, and unemployment is up 7.6 percentage points over that span. There are 8.2 million people who've left the labor force but still want a job, and that's up by 3.2 million over the past four months.

Moreover, there are signs that people are still getting laid off or let go from employment. First-time claims for unemployment benefits came in at 1.427 million for the week ending June 27. Although that was down by 55,000 from the previous week's number, the figure remains at extremely elevated levels compared with the typical 200,000 to 250,000 unemployment claims per week before the coronavirus pandemic hit.

Unfortunately, it's possible that more recent events not reflected in the monthly jobs report could have negative consequences in future months. As a host of new states see massive COVID-19 outbreaks, a return to business closures could hit companies once again. That's especially true in areas like leisure and hospitality, which were only beginning to move back toward more normal conditions.

At this point, market participants have had a rosy scenario that assumes either that the pandemic will come under control or that it will have no further impact on the economy. If neither of those proves to be the case, then many cyclically sensitive stocks could end up moving back lower and giving up the bounces they've seen since March.