Rising more than 25% in 2019, shares of Newmont Corporation (NYSE:NEM) glittered brightly last year. And the market's penchant for picking up shares of this leading gold mining company has grown even greater in 2020. Through the first six months of the year, Newmont's stock has risen 42%, according to data from S&P Global Market Intelligence, outperforming the S&P 500 which has dipped 4% during the same period.

While the market's growing appetite for gold was one cause in the stock's rise, it wasn't the sole factor. Favorable coverage from Wall Street, management's commitment to shareholders, and a strong first quarter earnings report all represented additional factors. 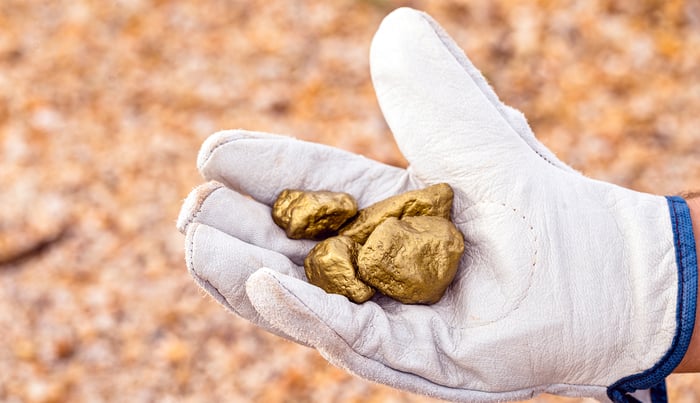 In light of the strong correlation between the movements in the price of gold and the stocks of gold mining companies, Newmont's rise through the first half of the year is unsurprising as the price of the yellow stuff rose 15.4%. While the stock market's downturn in March contributed strongly to the uptick in the price of gold, high unemployment, widespread protests, and political tensions have all inspired many investors to turn to what they consider safer investments such as gold.

Through the first half of the year, several analysts suggested that it was a good time to load up on this lode-seeking company. JP Morgan, for example, initiated coverage on the stock in early April, assigning it an outperform rating at $61 -- only to raise the price target to $70 a week later, according to Thefly.com. In early May, Citi and Deutsche Bank assumed similar positions; both firms rated the stock a buy and assigned it a $70 price target as well.

Newmont's lustrous first quarter earnings report represented another catalyst for the stock's rise. With the contribution of assets from the merger with Goldcorp, Newmont reported first quarter revenue of $2.58 billion, a year-over-year increase of 43%. The bottom line glimmered brightly as well; net income from continuing operations totaled $837 million in first quarter 2020, a considerable increase over the $113 million the company reported during the same period last year.

Lastly, investors rejoiced at Newmont's decision to generously raise the dividend to $0.25 per share, a 79% increase over that which it distributed in first quarter 2019. Speaking to the allure of the dividend on the first quarter conference call, Tom Palmer, Newmont's CEO, said that the company's first quarter dividend "will provide investors with the highest dividend yield of any senior gold miner and is a testament to our financial flexibility, balance sheet strength and conviction in the stability of our business."

Looking back at the past six months, those who are mining the market for gold investment opportunities may feel that it's too late to pick up shares of Newmont. But that's hardly the case. In fact, there are plenty of reasons to believe that Newmont's stock still represents a compelling option for investors interested in adding some luster to their portfolios.