Please ensure Javascript is enabled for purposes of website accessibility
Log In Help Join The Motley Fool
Free Article Join Over 1 Million Premium Members And Get More In-Depth Stock Guidance and Research
By Will Healy – Jul 6, 2020 at 7:15AM

A closer look at the retail and cloud giant and the ultra-discounter creates some interesting comparisons.

Amazon (AMZN -0.64%) and Dollar General (DG -1.09%) are leading retailers within specific sectors. Amazon has become the biggest company in e-commerce, while Dollar General has turned into one of the most significant players in the ultra-discount space.

Other than their status as retail stocks, the two entities appear not to have much in common. But both companies have begun to encroach into each other's space. In the process, Amazon has tried to undercut both Dollar General and its primary competitor, Dollar Tree.

But which is the better buy in terms of their stocks? Let's take a closer look at their businesses and stocks to find which of these companies offers more investment potential. 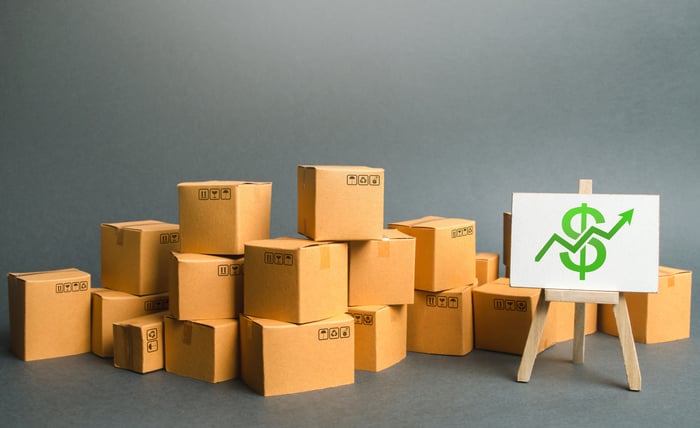 Amazon and Dollar General do not look like direct competitors. Amazon dominates general e-commerce retailing while bolstering that operation with a cloud division that generates most of Amazon's profits. Dollar General functions primarily as a discounter among discounters.

Even before the coronavirus pandemic took a bite out of the economy in 2020, Dollar General benefited from both low-income and budget-focused shoppers drawn by low prices. This has helped the company expand its physical footprint to more than 16,000 stores across 46 states.

However, they have recently become direct competitors as Amazon has taken an interest in the ultra-discounting segment of retail. It has not only offered products at the $1 price point, but it has also included free shipping in some cases (like if you have a Prime subscription).

This is curious on two basic levels. For one, Dollar Tree is the only retailer committed to the $1 price point on all items. Secondly, selling products for $1 and shipping them does not seem to leave much of a profit margin for Amazon. Moreover, this price point tends to attract low-income customers; it's not clear that many of these shoppers have the ability to pay the $119 annual fee for Amazon Prime.

Though Amazon stock has performed well, it is likely not because of the dollar-store strategy. Moreover, over the last year, Amazon has only outperformed Dollar General due to a recent surge. Dollar General stock also produced higher returns for much of the year. 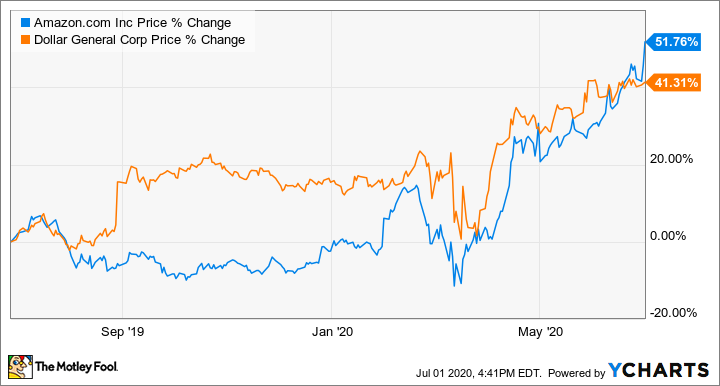 At first glance, Dollar General looks like the more affordable stock. It trades at a forward P/E of around 23.4 versus Amazon's 133.3 forward multiple.

But when factoring in profit increases through the price-to-earnings-to-growth (PEG) ratio, this margin narrows considerably. Dollar General's PEG ratio is about 2.2, compared with about 3.1 for Amazon.

This happened because of Amazon's tremendous growth in both retailing and cloud computing. Amazon's net income fell considerably in the most recent earnings report. The switch to one-day shipping and perhaps its move into ultra-discounting may have contributed to the lower profits.

Interestingly, Dollar General came in with even better results in its previous quarter. Net sales increased by 27.6% from the same quarter last year. This helped fuel a 73% increase in diluted EPS over the same period.

The massive rise in unemployment brought about by COVID-19 likely fueled much of this increase. Cash-strapped consumers looking for bargains drove sales significantly higher in a bid to meet needs while conserving cash.

Investors should profit from both stocks long term, but I have to give the edge to Amazon.

Dollar General will probably prosper in good times and bad. However, as the economy improves, some of its recently acquired customers may return to previous shopping habits. Moreover, Dollar General's reliance on low-cost merchandise makes the company somewhat vulnerable to foreign trade issues like the U.S. trade war with China.

Conversely, Amazon benefits from diversification. No matter what happens with its retail arm, the primary source of Amazon's bottom-line income is AWS. With cloud computing continuing to log massive revenue and profit increases, Amazon stock should see faster growth despite its higher multiple.