A bigger second payment may not be in the cards.

Most Americans agree that another COVID-19 stimulus payment is necessary. And one of those Americans appears to be President Donald Trump. In fact, the president not only promised another stimulus check recently, but he also indicated the next COVID-19 payment would be a big one.

The president made these comments in a June 22 interview, indicating: "We will be doing another stimulus package. It'll be very good, it'll be very generous." His words gave hope to those watching for signs of a second payment, but unfortunately even assurances from the president don't necessarily mean a second big payment will be forthcoming. 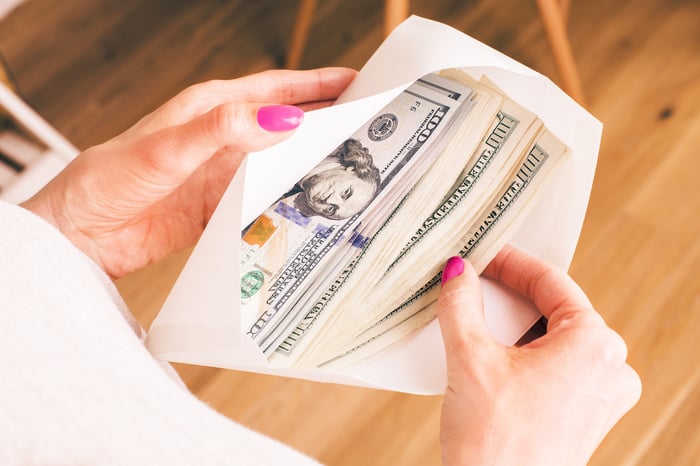 Why a second generous payment isn't a guarantee

Although the president wants to provide a payment Americans consider generous, that would likely necessitate the second COVID-19 payment being substantially larger than the first one.

That's because the CARES Act authorized payments of just $1,200 per adult and $500 per dependent child, amounting to a payment worth just over six days of earnings for the average worker and covering spending costs for just about half a month for the typical household. Most Americans spent this money quickly, typically on necessities, with the provided funds already gone for many even before the National Bureau of Economic Research had officially confirmed the country was in a recession.

While this first payment didn't do a ton to help the typical American, it came at a big cost -- more than $267 billion. If lawmakers were to authorize a second stimulus payment that's more generous than the first, costs would only go up from there -- likely substantially when you're talking about sending much more cash to 159 million households. That's a problem, as Senate Majority Leader Mitch McConnell has indicated the overall price tag of the next coronavirus relief act has to be under $1 trillion.

Of course, if lawmakers passed a law authorizing only more stimulus money for Americans and nothing else, this would certainly provide enough to send out a check that would be considered generous by most standards. But that's not going to happen. The Trump Administration, as well as lawmakers from both the right and left, have other priorities they want to include, such as incentives for going back to work; relief for states suffering from a reduction in tax revenue; infrastructure spending to help get the economy going; and more.

Since President Trump can't authorize more stimulus money for Americans unless he's signing a bill lawmakers have passed, the only way the public will see a second COVID-19 payment is if negotiations lead to a bill that can get majority support. This will require compromise, which likely means it will have to include some items from each side's wish list. This, of course, also comes at a big cost, and it leaves little room to increase the size of the second direct payment to Americans without the bill coming with a price tag that scares too many budget-conscious lawmakers away.

How you can prepare even if a second stimulus doesn't come

Nothing in Washington, D.C., is ever a done deal until a bill is signed, so that means it's up to you to make sure you're ready to survive a recession -- even without more stimulus money. There are a few key things financial advisors recommend doing so you're prepared, including:

These steps can help if you still have sufficient income coming in. If you don't, look into expanded unemployment benefits or other sources of aid to help see you through the crisis. Some states are providing relief, and there are also other federal benefit programs that could help even if that generous stimulus check you were hoping for doesn't end up coming in the end.