It is helping to fuel Squareʻs 82% year-to-date return.

Mobile payments innovator Square (SQ -4.18%) has been one of the top-performing financial stocks on the market, with an eye-popping year-to-date return of 90% through Monday's close. Since the company went public in November 2015, it has posted an annualized return of about 75%.

Those types of numbers will get any investor's attention, particularly in this type of market. But let's go inside the numbers to see why Square has been such a success story. It really boils down to one key reason that Square is beating the market.

Square started out making credit-card readers that allowed merchants to accept payments using their smartphones, and it has expanded as a provider of financial services, all focused on payments and transactions. The original card reader has expanded into Square Register, a point-of-sale digital terminal that allows contactless payments online or in-store. It also offers other payroll services for small businesses through Square Payroll; banking through Square Capital; and a website service called Square Online Store that allows merchants to easily create online storefronts and sell online. 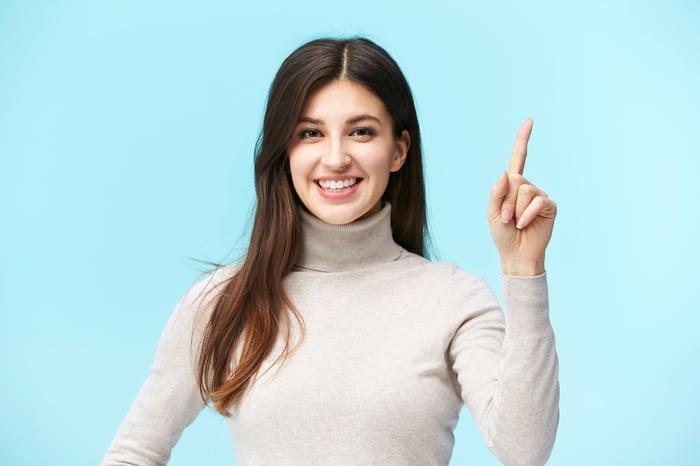 But its most successful and fastest-growing business is the Cash App, an app that allows people to send and receive money. It has an accompanying Cash Card, a debit card tied to the app that can be used to make purchases online or in-store.

Cash App has grown from 7 million users at the end of 2017 to about 24 million users now. In the first quarter, it generated $528 million in revenue, up 197% from the previous first quarter, and $183 million of gross profit, up 115% year over year. This is for a product that just launched two years ago, and it's expected to continue to grow as the nation gradually moves to a cashless society.

Currently, Square serves less than 2% of the addressable $60 billion cash app market, so there is plenty of room to run. In the next five to seven years, MoffettNathanson analyst Lisa Ellis expects the Cash App to generate $5 billion in annual revenue and $2 billion in annual earnings. By then, she projects it to have 60 million users with 50% of them using the Cash Card -- up from 20% now.

Square has a lot going for it as a leader in a booming industry that will continue to grow as the world moves away from cash toward digital payments. The global digital payments market has grown by 50% the last three years, to about $4.7 trillion, and is expected to hit $6.7 trillion by 2023. That growth could be accelerated by the pandemic, as social distancing practices will likely remain in place for a while.

But even with those tailwinds, the thing that sets Square apart is that it has built an ecosystem for customers through its digital payments business. It is essentially a one-stop shop as business customers can use Square for payments, payroll, and banking. Founder and CEO Jack Dorsey has called this the companyʻs "core differentiator" among its competitors.

"While the macroeconomic environment remains uncertain, we believe our long-term strategy of building a diverse ecosystem of products, customers, and use cases adds resilience to our company," Dorsey said in the first-quarter shareholderʻs letter.

The other key differentiator is that Square serves both sellers and buyers, the latter through its Cash App and Cash Card. These two ecosystems present the company with tremendous potential to close the loop and connect the two.

"But we do believe that there is a lot of real strength that comes from connecting the two ecosystems," Dorsey said on the first-quarter earnings call. "They're amazing independently, but as we look for those connection points whether they'd be a boost to local sellers, what we've done with our payroll product and paying employees with Cash App so they could access their funds immediately. There's a number of those that we think are really interesting and potentially really impactful. So, we wanted to make sure that we are handling the present challenge first, but we're definitely not taking our eyes off the ball in terms of how we connect these two down the line."

When that happens, it could fuel even greater growth for the company.