Shares of Sunrun (NASDAQ:RUN) and Vivint Solar (NYSE:VSLR) surged on Tuesday after the two companies agreed to a merger that could create a new solar energy titan. By the close of trading, Sunrun and Vivint Solar's stocks were up 23% and 38%, respectively.

Sunrun is seeking to acquire Vivint Solar in an all-stock deal that values Vivint at $3.2 billion. Vivint's shareholders would receive 0.55 shares of Sunrun stock for each Vivint share they own. 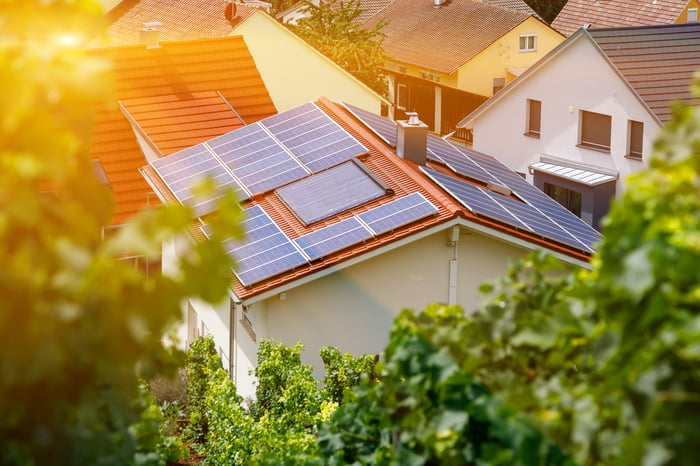 Shares of Sunrun and Vivint Solar rose sharply on Tuesday on news of a potential merger. Image source: Getty Images.

The combined company would be one of the largest home solar and energy services providers in the U.S., with a customer base of roughly 500,000 and more than 3 gigawatts of solar assets. The two companies also believe that together, they'll be able to slash expenses by as much as $90 million annually by reducing redundancies in their supply chains, office branches, and technology.

The deal is expected to close in the fourth quarter, pending shareholder and regulatory approval.

Climate change is making renewable energy sources more important than ever before. Solar power is one of the most promising technologies in this regard. Yet despite years of strong growth, residential solar represents only about 3% of the electricity generated in the U.S. The industry still has tremendous room for growth, particularly with surveys showing that nearly nine out of 10 Americans are in favor of increased solar power usage.

If this deal goes through as planned, a combined Sunrun and Vivint would be well positioned to play a leading role in the solar industry's long-term expansion.