Please ensure Javascript is enabled for purposes of website accessibility
Log In Help Join The Motley Fool
Free Article Join Over 1 Million Premium Members And Get More In-Depth Stock Guidance and Research
By John Bromels – Updated Jul 8, 2020 at 11:39AM 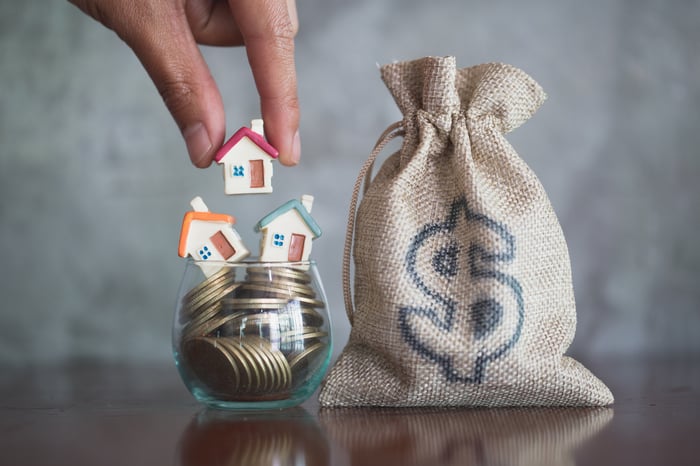 It's sometimes hard to tell how mortgage REITs (also known as mREITs) are going to be affected by economic changes. Most mREITs borrow huge amounts of low-interest money from lenders to buy higher-interest mortgages and mortgage-backed securities. Sometimes, an mREIT will turn right around and sell these to banks. So mortgage rates, non-mortgage borrowing rates, and mortgage default rates all play a role in how mREITs perform.

As much of the U.S. economy began to shut down in March and early April, the unemployment rate soared to nearly 15%. Because layoffs are often a major factor in mortgage defaults, shares of mREITs were immediately hit hard. Luckily, Congress stepped in with the CARES Act. Among other things, the legislation expanded the ability of borrowers to apply for mortgage forbearance, or deferred payments.

Of course, a low mortgage default rate is a plus for everyone, including mREITs. In the short term, though, the CARES Act forbearance could negatively impact mortgage lenders by allowing borrowers to skip up to a year of payments without defaulting on the loan.

This put the mREITs in a cash crunch: On the one hand, it looked as though their cash flows would be temporarily hurt by a surge in nonpaying borrowers, while they were still on the hook for their financial obligations to their lenders and banks to which they had sold securities. Many mREITs, including Chimera and Two Harbors, cut their dividend payouts, and some, including MFA, suspended their dividends altogether.

Investors see any positive movement in the job markets, as well as any signs that the U.S. economy is recovering in general, as good news for the mREITs. And they got that good news in June: On June 5, the Department of Labor released its May jobs numbers. Nonfarm payroll data showed that the economy added 2.5 million jobs in May, the highest number ever recorded. That was a sharp turnaround from April's record loss of 20.7 million jobs, causing the unemployment rate to fall to 13.3%. While that's still a very high number, it was seen as a sign that economic conditions might be improving, and mREIT shares took off: 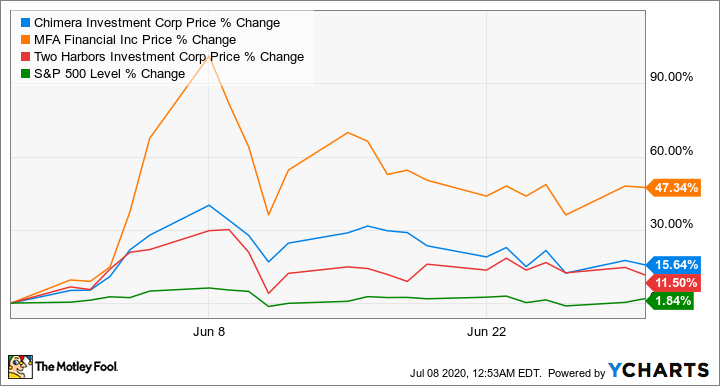 However, the rally was short-lived. News of increasing numbers of COVID-19 cases in states across the country called the recovery into question, and many investors sold off their mREIT shares again. Still, it was enough to allow the mREITs to finish the month with double-digit gains. While MFA's gains look particularly outsized, it had fallen farther than its two peers in March, thanks to its riskier asset mix; for the year, its shares are still down the most (69%) of the three.

Although all three companies are currently trading below their book value, and Two Harbors and Chimera are still sporting double-digit dividend yields, this entire class of investments is risky right now. The U.S. economic recovery remains fragile, and until it's on firmer footing, mREIT shares are unlikely to bounce back. Meanwhile, a set of poor jobs numbers or an increase in the number of mortgage borrowers applying for forbearance could send shares even lower.

Investors who are convinced that the worst is behind us -- and who have an extremely high risk tolerance -- might consider buying in at these prices, but should first acquaint themselves fully with mREITs and the issues facing them right now; this snapshot barely scratches the surface.