Between erratic market conditions, risk-fraught clinical trials, and unpredictable drug development pipelines, biotech investors know that with some stocks, discretion is the better part of valor. Nonetheless, July is a critical month for several leading biotech companies, and there's a lot that investors need to know if they want to make a prudent decision about whether to invest.

As one of the first biotech companies to move into clinical trials with a COVID-19 vaccine candidate, Moderna (NASDAQ:MRNA) has had a rollercoaster of a year, with its stock growing in the triple digits from March to May. But Moderna's shares stumbled immediately after the company announced at the end of June that its highly anticipated COVID-19 vaccine phase 3 clinical trials had been delayed for an unknown period. The delay is related to Moderna's dosing protocol, but it's unclear if it means that the company's phase 2 results were worse than expected. The company's COVID-19 vaccine is far from its only pipeline project, and Moderna has a small handful of phase 2 programs that it will move forward in the fall whether or not its vaccine development efforts are successful. If Moderna's COVID-19 trial proceeds and reports favorable results, even with the recent troubling delay, its 47.7% year-over-year quarterly revenue decline will be easy for investors to ignore.

Either way, with more than $1.2 billion in cash on hand and less than $152 million in debt, Moderna has plenty of runway to get its pipeline projects off the ground. This means that more conservative investors might consider waiting for news about Moderna's other ongoing projects before proceeding.

Gene therapy company Sangamo Therapeutics (NASDAQ:SGMO) recently initiated a reorganization of its research and development (R&D) business units into two separate wings, with one wing dedicated to preclinical research and the other to clinical development. Despite the market's mildly negative reception, this is good news because it means the company is anticipating a need for more robust development resources in the future. The change will help the company prepare to move forward with clinical trial operations and develop manufacturing protocols for its cellular and gene therapies.

Sangamo is worth watching because its first major pipeline project is just months way from potentially getting regulatory approval. At present, Sangamo is highly unprofitable, but it nets $107.4 million in trailing-12-month revenue from its phase 3 clinical trial collaborations with Pfizer for its hemophilia A gene therapy, as well as two phase 2 collaborations with Sanofi.

The ultimate buy signal for Sangamo will be when its phase 3 gene therapy trial for hemophilia concludes and the company receives regulatory approval to sell it on the market, but there will likely be good news in the interim. Follow Sangamo's press releases regarding its hemophilia gene therapy closely, as positive results will lend validity to the two other gene therapy programs in Sangamo's pipeline, thereby prompting stock growth. 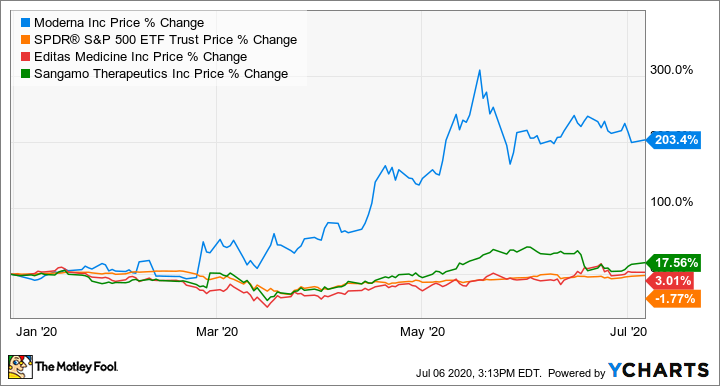 Editas (NASDAQ:EDIT) is a closely followed biotech thanks to its heavy utilization of popular gene editing technologies like CRISPR. While the company's stock price has grown substantially during its short history, investors may soon see it truly take off.

Editas' EDIT-101 gene therapy for Leber congenital amaurosis recently advanced into phase 1 clinical trials, in which the first patients were dosed with the therapy. While results from this initial dosing have not yet been published, there's a good chance that Editas will report on early progress by the end of the summer. If the early patient-dosing studies indicate that Editas's therapy is broadly safe in the short term, its stock price will get a powerful boost.

Editas has no products approved for sale, but it has posted year-over-year quarterly revenue growth of 176.6% thanks to its numerous preclinical development collaborations with companies like Abbvie. These collaborations will ensure that Editas can keep the lights on while it pushes its novel gene therapies through risky clinical trials.