Abercrombie & Fitch (NYSE:ANF), like many other apparel retail stocks, has plunged this year as the COVID-19 crisis has forced its stores to close. A&F's growth had gradually stabilized after CEO Fran Horowitz took the helm in 2017, but its growth decelerated significantly in 2019 before the pandemic derailed its fragile recovery.

However, value-seeking investors might be wondering if A&F's stock has bottomed out after its 40% year-to-date decline. Let's take a fresh look at the retailer to see if it's a worthwhile turnaround play.

What happened to Abercrombie & Fitch?

By the time Jeffries resigned in late 2014, A&F had suffered eleven straight quarters of declining comparable store sales. His responsibilities were then split between several executives for more than two years until Horowitz, the company's president and chief merchandising officer, was promoted to the CEO role.

How did Horowitz turn around Abercrombie & Fitch?

A&F reduced its total store count, including several flagship locations, and renovated its remaining stores with simpler and brighter designs. It also launched fresh marketing campaigns for A&F's Fierce fragrances and stabilized the growth of Abercrombie Kids in the U.S.

Unfortunately, much of that sales growth, especially in 2019, was buoyed by markdowns. A&F was also hit with higher trade war tariffs, since 22% of its products were still sourced from China last year. Those two headwinds clearly weighed down its gross margins: 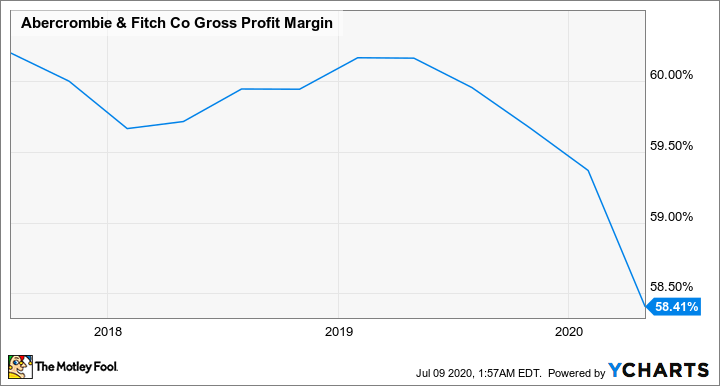 A&F tried to offset those declines with tighter spending, but its adjusted operating income and EPS still plunged 40% and 37%, respectively, in 2019. All that happened before the COVID-19 crisis slammed the retail sector in A&F's first quarter -- when its total sales slid 34% annually, trickled down to a net loss, and resulted in the suspension of its dividend.

Will Abercrombie & Fitch survive the downturn?

During A&F's first-quarter conference call in late May, Horowitz stated that nearly half the company's stores had reopened. CFO Scott Lipesky also noted A&F was "lucky enough to have a very strong digital business, to keep our inventory flowing from the minute that we closed stores." A&F's digital sales, which accounted for over half its top line, grew 25% annually and accelerated month-over-month during the quarter -- but still couldn't offset its brick-and-mortar store closures.

A&F withdrew its full-year guidance in March, but analysts expect its revenue to decline 14% and for its bottom line to remain in the red. For fiscal 2021, analysts expect its revenue to rise 11% as its returns to profitability. But investors should be skeptical of those forecasts, since they probably don't fully account for the economic fallout of COVID-19, the unresolved trade war, and the possibility of a second wave of infections.

For now, the best strategy for A&F might to be pursue its long-rumored merger with American Eagle Outfitters (NYSE:AEO). A&F, Hollister, and AEO's namesake brands would complement each other, and A&F could merge its growing Gilly Hicks brand with AEO's popular Aerie brand to gain more female shoppers.

Is A&F's stock worth buying?

A&F's stock only trades at eight times forward earnings, but it's cheap for obvious reasons. The COVID-19 crisis torpedoed the company's turnaround plans, and it will likely endure a lot more pain before its business stabilizes again. The suspension of its dividend also eliminates any incentive to wait for a recovery. So for now, investors should avoid A&F until these fierce headwinds wane.