Nike (NYSE:NKE) and Disney (NYSE:DIS) are two sports stocks to keep an eye on this month.

Is Nike in trouble?

Nike recently released its third-quarter earnings with sales performing worse than analyst estimates. Revenue decreased 36% on a currency-neutral basis, and the company posted a $790 million loss. While that wasn't terribly surprising, the question is how long it will take the company to get into the positive. It claimed to have taken all sorts of actions, such as increasing focus on digital and streamlining inventory, but that couldn't push back a store closure on such a massive scale.

On the heels of the quarterly report, Nike sent an email to employees announcing a restructuring plan that will include layoffs.

Although Nike seems almost untouchable, with its super-high lead in the activewear space, the pandemic has changed other aspects of the retail landscape and anything has become entertainable. Certainly, Nike's premium label, along with its premium price tag, may become out of reach for many fans, and a company like Skechers, which functions as a lower-priced alternative, stands to gain.

On the other hand, rival Lululemon, which also has a premium price tag, only posted a 17% decrease in sales over a similar time period and made a profit.

In Nike's favor, it's still customers' No. 1 favorite brand in many key areas, and sales in China, where the Nike trending app increased users more than 350% since January, are already entering the positive. The Nike commerce app has been downloaded at triple last year's rate, and Nike digital sales increased 79% over the prior year.

This time period is crucial for Nike, as nearly all stores have reopened and its digital program has been set up for success. Will the fans be coming back for full-price items, or will Nike need to cut its inventory with promotions?

Is Disney a sports stock?

While sports may not be the first thing that comes to mind when thinking about the entertainment king, Disney has a strong sports segment in its ESPN channel, a top choice for live sporting events. 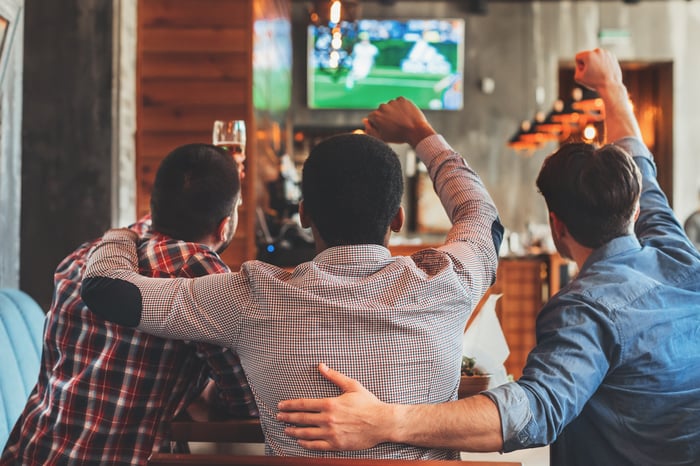 Along with the company's parks segment, channels have seen revenue slide over the past few months as games have been canceled. Execs had to figure out how to keep customers tuned in while there were no live events to show, and Disney said the channel is showing "compelling programming" in the absence of live programming.

ESPN had a big victory with The Last Dance, a 10-part documentary feature about Michael Jordan and the Chicago Bulls that was the most-watched ESPN documentary ever and the No. 1 sports program among all male demographics.

Another innovation was the NFL draft, which wasn't live this year. ESPN created a virtual event with 600 cameras live in different homes, and it was the most-watched NFL draft ever, with 55 million watching over the three-day event.

ESPN is launching three more new films and finding innovative ways to bring out engaging programming for its core audience.

With more of its parks slated to open this month and ESPN delivering content to keep viewers tuned in, Disney is a stock to watch in July.