Please ensure Javascript is enabled for purposes of website accessibility
Log In Help Join The Motley Fool
Free Article Join Over 1 Million Premium Members And Get More In-Depth Stock Guidance and Research
By Billy Duberstein - Jul 9, 2020 at 9:00AM

The credit card company plummeted along with many other financial stocks.

Shares of American Express (AXP 2.29%) fell 23.5% during the first half of 2020, according to data from S&P Global Market Intelligence. The credit card company slid along with the financial sector, which suffered from the economic recession caused by the COVID-19 pandemic.

While American Express isn't quite as exposed to credit losses as some other large banks, lower overall spending still affects its discount fee revenue and earnings. In addition, it is proportionally more exposed to business and travel spending than other card companies, which will hurt in the current environment. 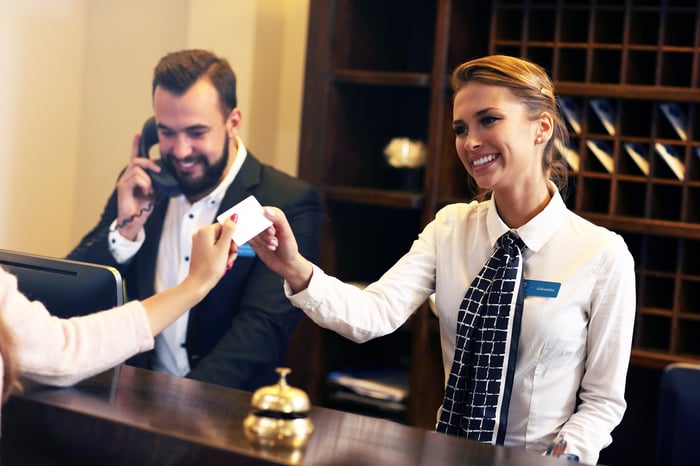 In the first quarter, American Express' revenue declined 0.5%, as compared to its 8% growth in 2019. Though that may seem like an insignificant hit, remember that the first quarter only had one month that was really affected by COVID-19.

In response, Amex took a large loan-loss reserve charge of $1.7 billion, as opposed to its "normal" quarterly reserve build around $100 million. That was enough to take earnings per share down to $0.41, from $1.80 in the prior-year quarter.

Still, American Express only made 22.6% of its revenue from lending last quarter. The rest came from discount charges and other fees, which are more tied to spending volume. That segment is suffering, too. Management noted overall billed business was down some 45% year over year in April. The drop was exacerbated by American Express being more heavily skewed to travel and entertainment expenses from big spenders, and travel and entertainment spending was down some 95% in April.

While the near term looks dour for American Express, the stock also seems quite cheap, as it only trades around 11.5 times last year's earnings. Meanwhile, the U.S. economy has improved from April, the company's balance sheet is in good shape, and Amex was recently approved to build out a card network in China -- the first U.S. card network to gain such approval.

Therefore, while the near-term outlook may be rocky, long-term value investors may wish to give American Express a look after its first-half decline.