The AI-powered analytics company's share price has soared by more than 250% over the last three years.

Shares of Splunk (SPLK -2.70%) gained 32.7% in the first six months of the year, significantly outperforming the broader market, according to data from S&P Global Market Intelligence. The stock's climb was propelled by the company's new partnership with Alphabet, encouraging first-quarter results, and momentum for the broader data analytics industry. 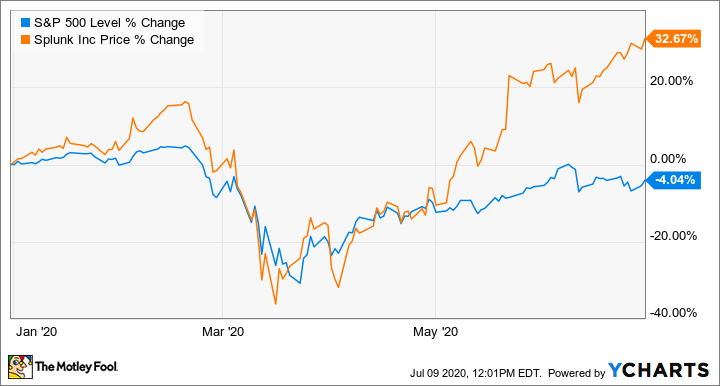 Concerns about how COVID-19 would impact the company contributed to a big sell-off in Splunk stock in March, but the pandemic and responses to it also pushed more business into the digital sphere. As companies increase their reliance on analytics to shape their strategies and products, that should create long-term tailwinds for Splunk.

Sales fell short of the market's target in fiscal Q1, but the company's transition to a cloud and subscription-focused model continued at an impressive pace. Annual recurring revenue rose 52% year over year, and cloud revenue climbed 81% in the period.

Splunk expects its annual recurring revenue to expand in the mid-40% range this year, and forecasts operating cash flow in line with the $288 million cash burn it posted last year. Management is targeting revenue of approximately $520 million in the fiscal second quarter, suggesting roughly flat performance compared to the prior-year quarter.