The department store is in secular decline.

As was expected, Macy's (M -1.36%) didn't have a great go of it during the first quarter of fiscal 2020, which ended on May 2. With physical stores shuttered for half of the period, the company burned through $164 million in negative operating cash flow on revenue of $3 billion -- compared with negative $38 million in operating cash flow and revenue of $5.5 billion a year ago.

It would be easy to chalk up Macy's latest struggles to COVID-19, but the chain's woes predate this latest crisis. The department store business model can't break out of the long and slow death spiral it's been stuck in, especially as the world pivots to digital sales and renders many real estate-heavy operations redundant.

Macy's stock might be a decent bet for certain individuals, such as those looking for an eventual rebound as the effects of the novel coronavirus ease. After all, Macy's negative cash burn isn't out of the norm given the typically sleepy post-holiday shopping season .

The retailer usually makes up the difference every year during the busy period from November to January. In fact, even after losing money in Q1 2020, trailing-12-month free cash flow remains positive $429 million.

With shares having lost 70% of their value over the last three years, including a 60% tumble year-to-date alone, it's reasonable to think Macy's stock might be undervalued right now. If the holiday season is busy despite the pandemic, then Macy current valuation, trading at a meager 4.9 times free cash flow, could be considered cheap indeed.

With stock indices overall nearly back to where they were at the onset of the year, this is one small corner of the market that might be considered cheap -- at least using some short-term metrics.

This is no turnaround story...yet

Whatever happens over the next six to 12 months -- Macy's is being cautious and thinks "normal" won't return until 2021 -- this is one retail stock that likely needs babysitting. The truth is that COVID-19 is but one headwind facing the brand.

The rise of e-commerce is often cited as the reason for the decline of the once-lucrative department store model of yesteryear. Granted, a little over one-quarter of Macy's 2019 revenue was derived from digital channels. That's respectable compared to some of its peers. However, simply migrating online is only part of the problem. Managing inventory, shipping, and related logistics are other pieces of the puzzle. While Macy's online presence has grown, that hasn't translated to higher profit margins over the last few years. Just the opposite, in fact. 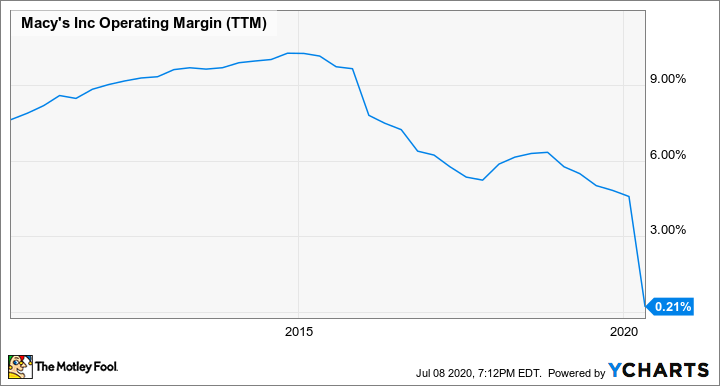 Consumers getting nudged down the digital path isn't likely to bode well for the bottom line.  Plus, there are plenty of other names vying for top-of-mind status in a post-pandemic "new normal." There are tech-powered upstarts like Stitch Fix. Amazon hardly needs mentioning. Even big-box store Target has taken a bite out of the department store model. Back in 2017, it embarked on its journey to up its game in higher-end private labels, which Macy's has only recently decided to focus on.

With revenue and profits under pressure, I'm not sure Macy's is well-equipped to play the long game against some of its more nimble and technologically advanced competitors. At the end of Q1, cash and equivalents on hand were $1.52 billion, but short- and long-term debt stood at $739 million and $4.92 billion, respectively.

Much will need to change if Macy's is going to right the ship. Closing underperforming stores will help. But outside of a possible rebound in share price as the effects of pandemic wear off, the horizon looks too fuzzy for me to tell long-term investors to pull the trigger. I think Macy's will still be around in five years, but this stock is cheap for a reason.

Why Is Everyone Talking About Macy's Stock?
370%