Macy's has been confronting major issues beyond the coronavirus pandemic and the economic fallout.

It is easy to excuse Macy's (M -0.44%) poor fiscal first-quarter results (the period that ended on May 2) as victims of the pandemic. Sales dropped by 45% year over year to $3 billion because stores were closed for about half the quarter. However, digital sales, which should have seen growth, experienced a high-single-digit-percentage decline.

Macy's stock has lost about 90% of its value over the last five years, clearly demonstrating that the retailer was facing major challenges even before COVID-19 forced store closures. Given the stock's history of decline, I suggest bypassing these shares. Here's why. 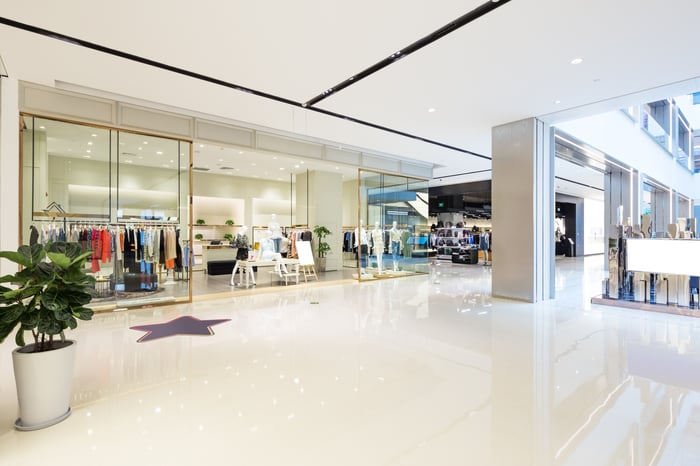 Although Macy's is a major department store operator with the well-known namesake and Bloomingdale's brands under its umbrella, its business has suffered for several years. In two out of the last three years, the retailer had negative same-store sales (comps), including last year, when the figure fell by 0.8% at owned stores.

One of the serious issues Macy's has been confronting is strong online competition that provides cheaper goods and fast delivery. Naturally, this includes Amazon.com, which has encroached on Macy's territory, including its apparel offerings.

Management's attempt to fight back has included a three-year plan launched in 2017 that set out to push an omnichannel approach (including a mobile app), and digital sales grew from 22% of sales in 2017 to 26% last year. However, the plan did not drive increased profitability. Macy's GAAP operating income fell from $1.9 billion in 2017 to $970 million last year.

More recently, Macy's came out with its Polaris Strategy, a new three-year plan that it announced in February. It aims to strengthen customer relationships, refocus merchandise with a particular emphasis on private-label goods, push digital growth, close stores, and cut costs.

Shutting 125 underperforming stores and slashing expenses is possible almost anytime. However, the other steps are more challenging, particularly with COVID-19 delaying a turnaround. The virus caused management to evaluate which parts of its plan to escalate and which to let lag.

Macy's decided to suspend its quarterly dividend, an understandable step many other companies have taken recently. But it does mean that shareholders, who had gotten a constant payment for four years, no longer get a cash payout. Conserving liquidity through steps like furloughing employees, laying off nearly 4,000 employees, and pushing back the timing of expense payments, the company doesn't appear likely to resume dividend payments anytime soon.

Macy's performance was lacking over the last several years when the economy was humming along. Now the company, which appeals to a higher-income customer, will feel the effects of the recession. During the previous downturn, its comps fell 4.6% and 5.3% in 2008 and 2009, respectively.

Unfortunately, there are deeper issues than just the current state of the economy. Macy's is confronting intense online competition, and it faces major headwinds in getting back on track. The risks the company faces in turning around its operations are just too great right now to make the stock attractive.