Please ensure Javascript is enabled for purposes of website accessibility
Log In Help Join The Motley Fool
Free Article Join Over 1 Million Premium Members And Get More In-Depth Stock Guidance and Research
By Dan Caplinger - Jul 11, 2020 at 6:03AM

After a massive run higher, the cruise-ship operator has started falling back again. Is there hope for shareholders?

COVID-19 has knocked down the entire travel industry, and cruise-ship operators, in particular, have had to suspend operations completely because of the pandemic. Royal Caribbean Cruises (RCL -0.12%) has had to take extraordinary measures to survive, but for a while, investors liked what they saw. The stock more than tripled between mid-March and early June on hopes that things could return to normal in short order.

However, a resurgence of coronavirus cases has sent shares of Royal Caribbean and its peers downward once again. That doesn't mean that Royal Caribbean is doomed, but it does indicate that the cruise-ship giant needs to have some things go right in order to mount a permanent rebound. Here are three of the most important milestones Royal Caribbean needs to achieve.

1. Royal Caribbean's new safety standards need to be convincing to everyone

The biggest concern among cruise operators is the past track record of health issues that have come up repeatedly on cruise ships. Congressional committee members and regulators at the Centers for Disease Control and Prevention have called on the entire industry to ramp up their safety protocols to address what many see as a problem that dates back well before the start of the coronavirus crisis. 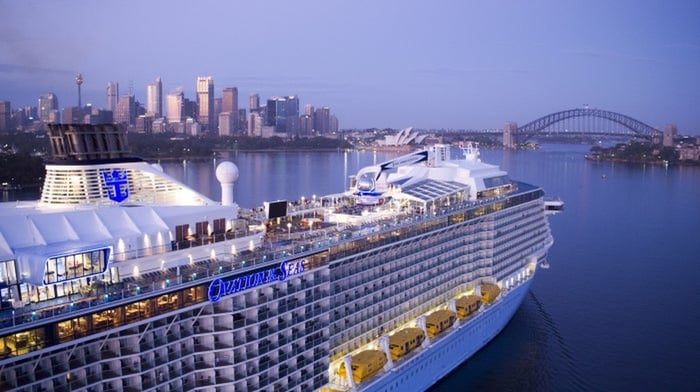 Investors were pleased to see recently that Royal Caribbean is working with rival Norwegian Cruise Line Holdings to figure out how to implement recommendations for social distancing in the cruise-ship environment. Royal Caribbean has said that it will reduce the number of passengers sailing on ships at any one time in order to help boost distances between them while still letting them enjoy all the attractions and entertainment opportunities on board. Other issues Royal Caribbean will address include testing protocols, planning of sailing routes, and structural modifications to ships to improve health and hygiene.

Those measures could hurt profits, but they're necessary to give both passengers and regulators the assurances they need that cruise ships won't be a new source of health problems in the future.

2. Royal Caribbean will have to keep giving passengers the royal treatment

There's no certainty about when Royal Caribbean and other cruise ships will be able to start sailing again. Although a CDC order is currently slated to end in late July, the cruise operators themselves have already said they won't resume trips until mid-September at the earliest. Some countries have extended restrictions well into the autumn months.

It's tough to get passengers to book and pay for a trip they know they might not get to take. Royal Caribbean has been good about giving would-be passengers as much flexibility as possible during the COVID-19 crisis. Its Cruise With Confidence program offers the option of cancelling a cruise as late as 48 hours before the sail date, with absolutely no penalty -- even if you booked an otherwise nonrefundable fare. For those whose cruises were cancelled during the early part of the pandemic, Royal Caribbean has given 125% credit back.

Those measures will be expensive, but they're vital to maintain passenger confidence. Some might have to deal with multiple cancellations as they try to get on a voyage as soon as possible, so everything Royal Caribbean does to make that process easier will pay off in loyalty.

3. Royal Caribbean has to slash immediate costs as much as possible

A big concern among investors is that with no revenue coming in, Royal Caribbean has fixed costs for managing and maintaining its vessel fleet that it has to pay. But raising money to pay those costs has become extremely expensive for the cruise operator.

In May, Royal Caribbean sold $3.32 billion in senior notes with interest rates of 10.875% and 11.5% in order to pay down a revolving credit facility. Then in June, the cruise operator raised another $2 billion in a complex structure that essentially uses its vessel fleet as collateral. Even then, it ended up paying 9.125% on regular notes and 4.25% on convertible debt.

With higher interest payments added to the cash burn from required vessel maintenance, Royal Caribbean is living on borrowed time. Anything it can do to cut expenses will keep it from having to go back to the financial markets for funding. Having to sell stock or incur more debt will only make a recovery harder for the consumer discretionary company.

Even with these three things, it'll still take a long time for Royal Caribbean to mount its recovery effort. Until a permanent solution to COVID-19 arrives, it'll be hard to predict how passengers will react to the cruise-operator's efforts. Without these efforts, though, it's a near certainty that Royal Caribbean shareholders will suffer.