MSC Industrial's earnings served up a note of caution ahead of the earnings season.

Industrial supply companies always give great color on the state of the U.S. manufacturing sector, so investors have reason for caution after MSC Industrial's (MSM -1.21%) latest third-quarter earnings report. Let's take a look at the details and why they suggest many industrial companies could be giving weak outlooks in the forthcoming earnings season.

On a headline basis, MSC's results looked pretty good. After all, net sales of $835 million were only down 3.6% year over year. Moreover, MSC did a pretty good job on margins in the quarter. 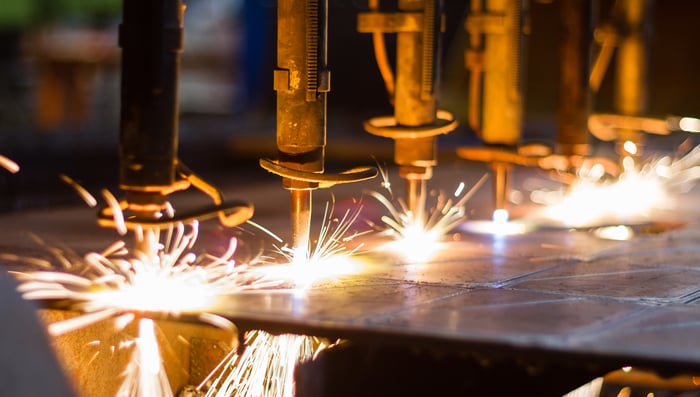 It's going to be a difficult quarter for heavy manufacturing companies. Image source: Getty Images.

A combination of price increases, purchasing cost reductions, and favorable sales mix helped to keep gross margins at 42.4%, compared to 42.5% in the same quarter last year. Meanwhile, operating cost cuts meant that operating income margin actually improved to 13.2%, from 12.8% in the same period last year. As such, operating income of $109.5 million was only marginally below the $110.5 million in last year's third quarter.

But the devil is in the detail

From a headline perspective, it all looks very good, not least as it comes from a COVID-19-affected quarter. However, let's get to the detail alluded to above. Specifically, let's look at the monthly average daily sales (ADS) trends, because it's a remarkable chart.

In a nutshell, MSC's sales received support from a temporary surge in demand for its safety and janitorial product lines, while its non-safety and non-janitorial product lines experienced a collapse in sales. This is the reason for the 6.3% jump in year-over-year ADS in May, but as these orders came down, MSC's overall ADS fell by a whopping 14.3% in June.

In addition, during the earnings call, CEO Erik Gershwind talked of "sustained and acute weakness across certain heavily metalworking-centric markets such as automotive, aerospace and oil and gas." That's definitely not good news in the near term for industrial companies like 3M (MMM -3.52%) and Illinois Tool Works (ITW -0.47%) that sell into these end markets. 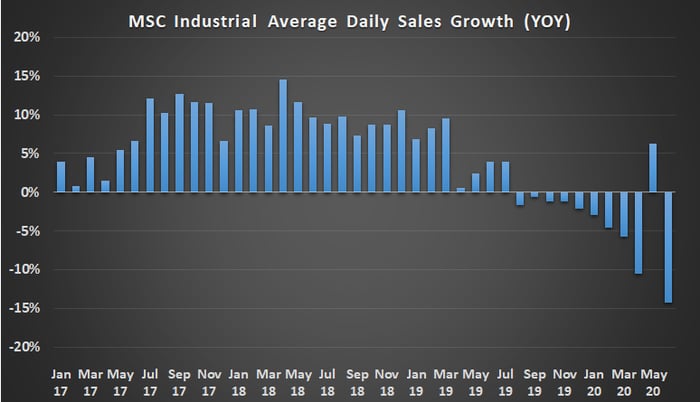 Of course, the key question is what kind of sales growth the company can expect as the temporary boost from COVID-19-influenced safety and janitorial sales dissipates.

Analysts asked about the matter during the earnings call, and Gershwind told them that in the second half of March and April, MSC's customers had 25% to 30% "partial or full" shutdowns and MSC's business went down "commensurately." Since the bottom in April, MSC's non-safety and janitorial sales increased 5% sequentially from April to May, and then from May to June according to Gershwind.

Indeed, Gershwind noted that "headlines are indicative of a faster ramp than what we're seeing in customer activity" with customers being cautious due to weak fundamentals and lingering concerns over the longer-term effects of the coronavirus. As such, it's likely to be a gradual recovery rather than a sharp rebound for MSC Industrial.

What it means for other companies

With earnings season coming up in a few weeks, it's worth reflecting that if the general environment is as bad as MSC's underlying sales and management's commentary suggest, then Illinois Tool Works will report significant weakness in its more cyclical businesses, particularly in its welding and automotive sales.

Similarly, 3M's organic local-currency sales were down 21% in May, and June could end up being a bad number as well -- that wouldn't be great news for a company in the midst of a restructuring initiative.

If June turns out to be a weak month for manufacturing, characterized by an excess of caution, it's hard to think that the managements of leading companies that sell into manufacturers will be confidently predicting a strong recovery. Look out for some disappointing comments on current trading.

What about MSC Industrial?

The stock has sold off significantly since the earnings report, and it's not hard to see why. Its end markets are clearly in a very difficult state right now, and the temporary boost from COVID-19-linked sales is fading fast.

That said, the margin performance was impressive, and as a relatively large player competing with myriad smaller competitors, this is arguably an opportunity for MSC to grab market share. Meanwhile, the company's sales (excluding safety and janitorial products) are recovering, albeit more slowly than many had hoped. As such, and now that the bad news is out, MSC is definitely a stock to keep an eye on with a view to buying should the sell-off get overly zealous.