In September 2019, the U.S. became a net exporter of petroleum products for the first time. By the spring of 2020, domestic crude oil production was nearing 13 million barrels per day before the COVID-19 pandemic turned the market on its head.

The CEO of one of the largest independent producers in the Permian Basin in Texas thinks that will mark the peak for a long time to come. Matt Gallagher, the 37-year-old head of Parsley Energy (NYSE:PE), told the Financial Times, "I don't think I'll see 13m [barrels a day] again in my lifetime." 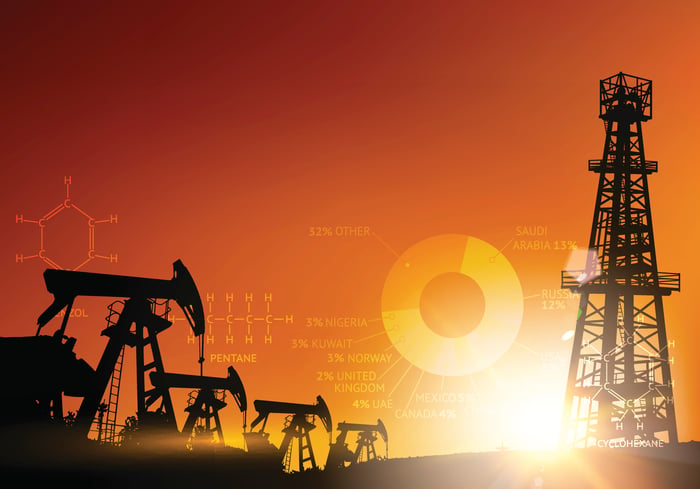 Lockdowns imposed to prevent the spread of COVID-19 brought transportation around the world to a virtual halt. The International Energy Agency (IEA) says that mobility represents 57% of global oil demand. The resulting oil price crash left the price of crude below zero for a brief period in April before rebounding to its current level near $40 per barrel.

The latest rig count from Baker Hughes (NYSE:BKR) shows a drop of 73% from the same time a year ago. Parsley's Gallagher doesn't believe that things will completely return to where they were. He told the Financial Times, "Our industry is the industry of mobility and comfort, and mobility is being drastically rethought."

Though Parsley has suspended guidance on production, it has said that it would aim to generate at least $300 million of free cash flow in a $20 to $30 per barrel level this year. While Parsley has restarted wells that were shut down during the price lows, it doesn't have plans to increase production with new drilling, according to the Financial Times. Gallagher believes that U.S. oil production will now stabilize near the 11 million barrel level.