How to invest in the return of sorely missed sports.

The pandemic brought professional sports across the world to a halt. Games and ancillary shows ended and advertisement dollars evaporated. The lockdown has been painful for companies who own the rights to these lucrative offerings. Now that sports are coming back, however, two stocks have a solid chance to bounce back.

ViacomCBS (PARA -0.77%) (PARA.A -1.12%) is first. This media conglomerate owns the rights to content like the NFL, college football, March Madness, and the PGA. Its sports broadcasting content rivals are media titans like Walt Disney and AT&T. 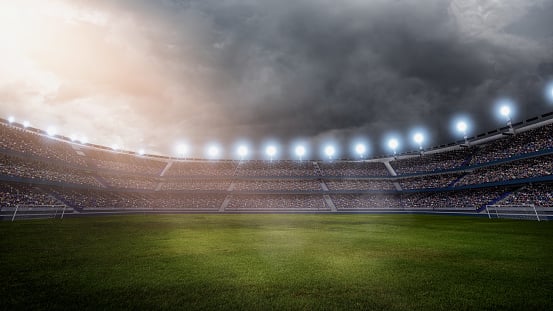 A canceled NCAA tournament, a paused PGA schedule, and doubt over this fall's NFL and college football seasons pushed the stock into free fall. In March, the stock plunged over 50% even after underperforming for years. Today, it remains 67% off its all-time highs.

But things are now looking much better. In May, the NFL and its Players Association agreed to have a full 2020 season. As the broadcaster of the games, ViacomCBS does not rely on fans in the stands for revenue; it relies on eyeballs in front of televised advertisements. Based on record-breaking viewership and gambling revenue for this year's NFL draft, it's clear that fans are yearning for some gridiron action.

The PGA tour is already back and exceeding all expectations for ViacomCBS CEO Bob Bakish and his team. Golfers have been infected with COVID-19, but matches nonetheless continue. CBS has enjoyed a record surge in ratings for every single event since play resumed.

College basketball and football both have more uncertain futures due to the amateur status of participating athletes . Still, Dr. Anthony Fauci has reiterated his hopes that there could be a vaccine before year's end, so that uncertainty could hopefully ebb soon .

Whenever these events return, ViacomCBS will be left with enviable sports broadcasting rights and a yet more enviable valuation.

Based on average 2020 earnings and sales estimates, ViacomCBS trades at a price-to-earnings ratio of 6 and a price-to-sales ratio of .5. Both metrics are significantly cheaper than nearly all S&P 500 members. The newly combined duo of Viacom and CBS is on pace to generate an impressive annualized cash flow of $1.2 billion, even without all the revenue March Madness generates. Earnings growth is expected to approach 16%, with sales growth of 6%. Based on this, Viacom analysts on average expect a revenue and profit growth premium compared to the S&P 500 -- yet the company trades at a steep valuation discount. Quite a compelling combination.

With the rights to four popular sports leagues, ViacomCBS will have unique and exclusive content to offer its customers independent of creating hit drama TV shows or award-winning movies. Sooner or later, sports will be back for ViacomCBS.

Next is Liberty Braves Group (Series C) (BATRK -2.14%), the owner of the Atlanta Braves. Unlike ViacomCBS, the Braves rely heavily on fan attendance to drive revenue, so they need the impending inoculation more than most.

This stock will look cheap once life returns to normal (whenever that may be). Based on a Forbes valuation, the team is worth $1.8 billion, but the equity changes hands for $950 million -- a sizable gap.

Furthermore, the company's assets not only include the Braves and their home field, Truist Park, but also surrounding real estate developments. Liberty Braves Group's Battery Atlanta development, for example, includes restaurants and a hotel that are not captured in Forbes' appraisal.

This season should be brutal for the Braves and the MLB. There is virtually zero hope of filling the stands by August and baseball relies on ticket revenue more than any other major sport. For long-term investors willing to be patient, the road will be rocky, but the upside could be immense.

COVID-19 got the best of professional sports. Still, a return to competition is a matter of when, not if. Eventual comebacks and compelling valuations make these companies staples of my portfolio. For two long-term winners, consider ViacomCBS and Liberty Braves Group.