With so much turmoil in the oil and gas markets, energy investors may want to look elsewhere in the sector for promising places to put their cash this month. Of course, renewable energy stocks have also had their ups and downs over the past few years, so it's important to choose wisely. 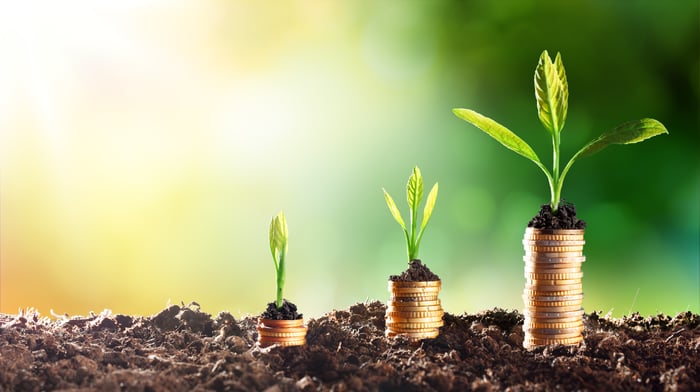 There's big, and then there's NextEra Energy. The electricity behemoth is one of the largest publicly traded energy companies in the world (and the only one that isn't an integrated oil or gas company). And yet, it still has plenty of room to grow.

Part of the reason the company has become so large is that it's really two companies in one. NextEra owns two Florida electric utilities, Florida Power & Light and Gulf Power, which together serve about 5.5 million customers across the Sunshine State. It also owns NextEra Energy Resources, a renewable power generation company that operates solar and wind farms -- and also eight nuclear power plants -- across the U.S. Only about half of the energy that NextEra produces goes to its Florida customers. It sells the rest to numerous third-party electric utilities for a reliable cash flow stream.

NextEra uses that cash to fund growth projects and its dividend, which currently yields just over 2%. But even such a big company can grow: NextEra has upped its payout every year for the last 25 years. It expects to continue growing it by 10% per year through 2022, supported by a huge backlog of growth projects. The company's shares are down about 9% from their all-time high in early March, which makes this a good time to pick up NextEra stock at a slight discount.

NextEra's power generation portfolio is mostly solar and wind with a little bit of nuclear. By contrast, Canadian master limited partnership (MLP) Brookfield Renewable Partners  derives most of its cash flow from a group of hydroelectric assets. However, solar and wind make up a rapidly increasing portion of Brookfield's portfolio.

Brookfield Renewable's ample cash flow currently supports a 4.3% yield, but management expects to grow cash flow by between 9% and 16% every year through 2024. Now is an excellent time to jump on this well-managed renewable growth train.

Darling Ingredients isn't what most people think of when they think "energy company." Its namesake ingredients are derived from leftover animal fats, which come from restaurant grease traps, slaughterhouses, and other icky places. Darling processes these into key components of animal feed, soap, and even biofuel.

Through its Diamond Green Diesel joint venture with Valero, Darling has been recycling some of its fats into usable biodiesel fuel. Although the companies have started small, the business is ramping up quickly. In the first quarter of 2020, Darling's share of Diamond Green Diesel earnings more than tripled year over year, to $97.8 million.

Coronavirus-related restaurant shutdowns have weighed on Darling's shares so far this year, but that isn't deterring management. On the first quarter earnings call, CEO Randall Stuewe indicated that plans to expand Diamond Green Diesel's capacity to 675 million gallons per year by 2021 would likely be unaffected, nor would preliminary explorations of a proposed new plant that would come online in 2024 and increase annual production capacity to 1.1 billion gallons.

Darling's shares currently trade at just 10.7 times earnings, near their all-time low. Despite outperforming in the first quarter, the company's shares are down nearly 14% for the year. That makes this a great time to buy in, as biodiesel and other renewable fuels play an increasingly significant role in the energy landscape.

We're never going to stop needing energy, and a growing world population means we're going to need more of it than ever. That's one reason that NextEra Energy, Brookfield Renewable Partners, and Darling Ingredients look like such good growth plays now. They're good picks to add as part of a balanced portfolio.