Please ensure Javascript is enabled for purposes of website accessibility
Log In Help Join The Motley Fool
Free Article Join Over 1 Million Premium Members And Get More In-Depth Stock Guidance and Research
By Will Healy – Jul 16, 2020 at 7:52AM

Which is the more lucrative investment: the chip designer or the chip maker?

According to TSM, AMD accounted for 23% of its revenue in 2019, making AMD its largest customer. However, 77% of Taiwan Semiconductor's revenue comes from other customers, and some of these relationships have come to define the company in recent months.

In the end, investors must decide whether the chip designer or the chipmaker is the more suitable investment. Why investors should consider AMD

AMD stock has gone from penny stock to tech darling over the last five years. Before Lisa Su became CEO, investors had written AMD off as a PC stock with no future. Under Su's leadership, AMD's graphics processing units (GPUs) caught up to, and in a few cases, surpassed, those of NVIDIA. On the central processing unit (CPU) front, AMD has outpaced Intel on many levels, selling 7nm chips when Intel still markets the 10nm alternative. 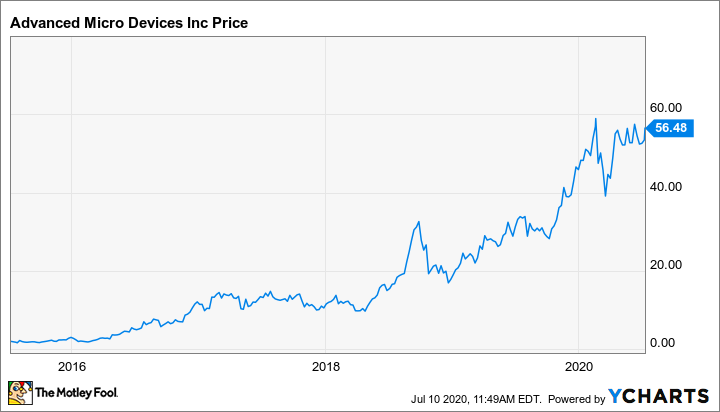 Investors have taken notice of this success. The forward price-to-earnings (P/E) ratio has moved to about 56. With almost 61% profit growth forecasted for this year and about 48% predicted for fiscal 2021, AMD remains in a high-growth mode. With revenue levels only one-tenth the level of Intel's, AMD stock should also move higher as it closes much of that gap.

Some investors may feel reluctant to pay such a high multiple. Still, with rapid growth being forecast for the foreseeable future, AMD stock could easily keep moving higher.

The case for Taiwan Semiconductor

Taiwan Semiconductor faces a different situation than its biggest client. It has found itself at the center of disputes between the U.S. and China. The U.S. barring Huawei from buying chips from U.S. manufacturers undoubtedly hurt TSM. To that end, TSM announced in May that it would build a $12 billion advanced chip factory in Arizona. This is critical since AMD is far from the only fabless chip design company.

However, it appears that Taiwan Semiconductor may not miss Huawei. For June, the company earned 120.88 billion New Taiwan dollars ($4.1 billion) in revenue. This represents a 40.8% increase from June 2019 revenue levels.

Due in large part to COVID-19-related selling, TSM stock has only risen by around 8% for the year. However, it has nearly tripled over the last five years, and forecasted growth could take it higher. 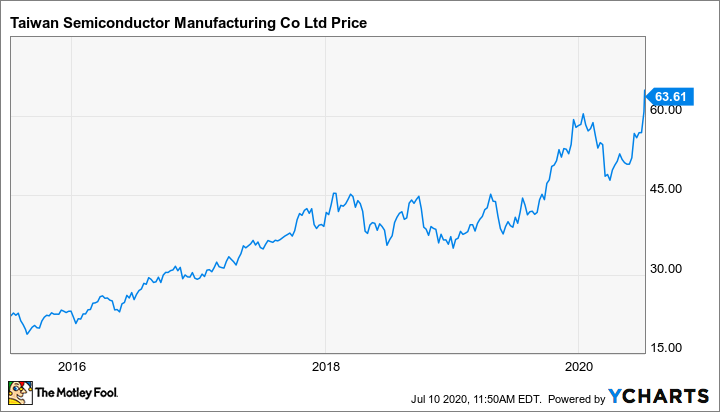 In the most recent quarter, the company earned $0.75 per diluted American depositary receipt (ADR) share, an increase of more than 89% year over year. Analysts project more modest earnings growth of around 25% for the year. Still, at a consensus forward P/E ratio of more than 23, this looks like a lot of growth for the money.

Moreover, unlike AMD, Taiwan Semiconductor investors receive a generous dividend. The current payout is about $1.68 per ADR share, a dividend yield of approximately 2.7%. The payout tends to increase annually when measured in U.S. dollars.

In the end, investors have to balance the dividend yield and the relatively low multiple against the Taiwanese company's geopolitical exposure to China. Still, with the industry's heavy dependence on TSM, demand for chip technology and a diverse customer base should continue to bolster this stock.

I expect both stocks to move higher over the next few years. Choosing between these companies is a difficult decision. The fact that they depend heavily on one another complicates matters.

Still, for investors who want growth, AMD is the clear winner. AMD remains a much smaller company than TSM or its direct peers. With the rapid revenue and earnings increases that have been forecast, investors should continue to profit as AMD becomes a top chip company.

However, investors looking for safety should lean toward Taiwan Semiconductor. TSM has built a diverse client base. It also offers a dividend as it maintains double-digit earnings growth. Moreover, the move into Arizona should allay some of the geopolitical fears related to China.

Whatever decision investors make, both companies should prosper as they continue to drive the advancement of semiconductor technology.