Which of these two consumer brands is the better investment from here?

Walt Disney (DIS 0.84%) and Anheuser-Busch Inbev (BUD 2.64%) are dominant in their respective markets but have fallen on hard times following the COVID-19 pandemic. With both stocks down year to date, this might be an ideal time to go bargain hunting.

Let's compare these two powerhouses to see which one is the better buy today. 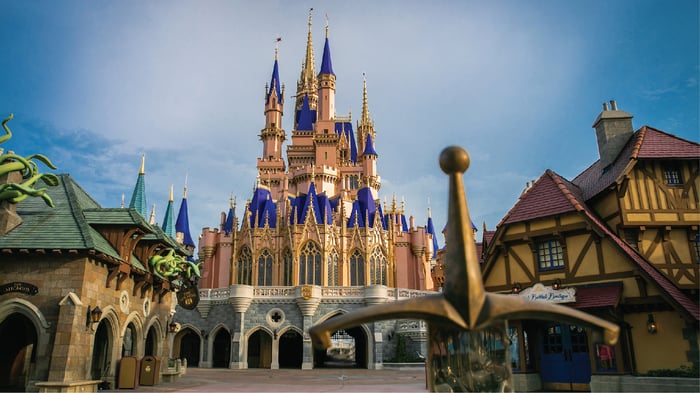 Disney's share price was down about 40% year to date at the height of the sell-off in March. Park closures, movie delays at the studios segment, and soft ad spending at Disney's media networks, including ABC and ESPN, took their toll on the top and bottom line last quarter.

Overall, revenue was up 21% year over year, mainly reflecting the consolidation of the acquired assets from Twenty-First Century Fox and Hulu. Profits were nearly wiped out, but the worst may be over.

Investors are starting to turn bullish on the stock after Disney began reopening theme parks in July. It's a crucial piece of Disney's empire, comprising 38% of total revenue in fiscal 2019. The Magic Kingdom Park and Animal Kingdom have already reopened, while EPCOT and Disney's Hollywood Studios are set to reopen July 15.

Josh D'Amaro, Chairman of Disney's Parks, Experiences, and Products segment, recently told CNBC that guests are booking reservations for the parks out into 2021, which is a good sign there is pent-up demand. However, there has been one snag in the reopening plans. Disney's park in Hong Kong is scheduled to temporarily close again on July 15 after a spike in coronavirus cases.

The COVID-19 situation remains fluid, so investors shouldn't buy the stock on the hopes it will move higher in the short term. We must keep our long-term thinking caps on, and the big picture looks much brighter at Disney.

The new streaming services -- Disney+, ESPN+, and Hulu -- provide Disney with a robust growth engine over the long term. Disney finished the March-ending quarter with 32.1 million subscribers across the three services. But the shelter-in-place period caused a massive surge in demand for Disney+. By May 5, management disclosed that Disney+ had reached 54.5 million subscribers, and the recent release of Hamilton reportedly caused a surge in downloads for the Disney+ app.

For what it's worth, Wall Street analysts currently expect revenue to be down 3.8% in fiscal 2020, which ends in September, before rebounding 13.4% next year. Adjusted earnings are expected to fall to $1.77 this year, but recover to $3.15 in fiscal 2021. 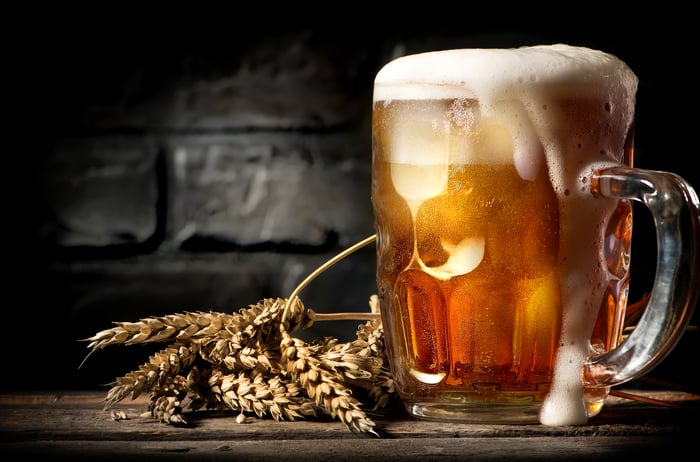 Anheuser-Busch's most valuable beer brands include Stella Artois, Modelo, Brahma, Corona, and, of course, Budweiser and Bud Light. The closings of restaurants and bars over COVID-19 hit the beer giant hard, with revenue down 5.8%, total volumes down 9.3%, and normalized earnings per share falling to a loss of $0.42 in the first quarter.

But those results don't reflect the full brunt of the pandemic, as volumes in April collapsed 32% year over year. The on-premise channel, which includes sales to restaurants, clubs, sporting events, and bars, made up a third of the company's volume in 2019.

Why I would go with Disney

Both stocks could make good investments at these discounted price levels, but there are a few reasons why I believe investors may earn a better return from Disney.

There are good reasons for Anheuser-Busch's weak returns. As dominant as its brands are in the industry, its core brands have been pressured by the growth of craft beers and hard seltzer. The number of microbreweries in the U.S. has skyrocketed over the last 20 years. Craft beers now make up a 13.6% share of the beer market, while domestic beers still control 67.4%.

Sales of hard seltzer may be a greater threat. They soared 226% in 2019 and now make up 2.6% of the total alcohol beverage market in the U.S. Anheuser-Busch has had success with its own hard seltzers, such as Bud Light Seltzer and Natural Light, but these are way behind the leaders. Boston Beer's Truly Hard Seltzer and Mark Anthony Brand's White Claw Hard Seltzer controlled 84% of the hard seltzer market in 2019, and that is up from 82% in 2016, which shows that the "king of beers" is not making any progress on taking share in this increasingly important category.

Anheuser-Busch's total market share declined 50 basis points in 2019, which management blamed on the growth of hard seltzers. Shifting consumer preferences are something the company will always have to wrestle with, as other consumer staple companies have had to do in recent years. Younger generations seem to be less willing to consume high-calorie beverages, which Anheuser-Busch will have to navigate.

On the other side, Disney may have more manageable problems. Other than pandemics, the main risk for Disney is continued cord cutting affecting ESPN and Disney cable channels, but Disney now has streaming services to pick up that slack.

Disney has a deep pool of intellectual property it can monetize for decades across Star Wars, Pixar, and Marvel, not to mention its classic library of animated films. The expenditures going toward streaming content have pressured earnings, which is why Disney currently trades at a forward price-to-earnings (P/E) ratio of 88, compared to 30 times earnings for Anheuser-Busch. But I wouldn't avoid Disney stock because of its high P/E. Management expects Disney+ to turn a profit by fiscal 2024, but the extra costs are worth it. Building that direct connection with fans will only boost interest in and engagement with Disney's entertainment empire.

In this case, I believe Disney's past returns are a good indicator of what investors can expect over the next 10 years. Disney gets my pick for the better buy.