This sports brewhouse is a potential rebound story … when the economy reopens.

Sports, craft beer, and a Pizookie dessert. What could possibly go wrong? As it turns out, a pandemic could.

Except for a run higher in 2018, shares of BJ's Restaurants (BJRI -2.66%) have been stuck in sideways action for years. And now, with shelter-in-place orders to fight COVID-19 limiting restaurants' ability to operate, BJ's stock has slumped over 50% so far in 2020. The chain, along with its peers, has at times started to rally on much-needed news of a treatment for the virus and reopening plans. But the depression oppressing restaurants won't end until the world starts to normalize. And there's also the "new normal" that will favor digital operations that will need to be dealt with once the dust settles.

This stock could be a big winner in the years ahead, but then again, it could be dead weight in a portfolio if things don't go as smoothly as necessary for BJ's to mount a comeback. Digging deeper into the numbers will help in making an educated decision. 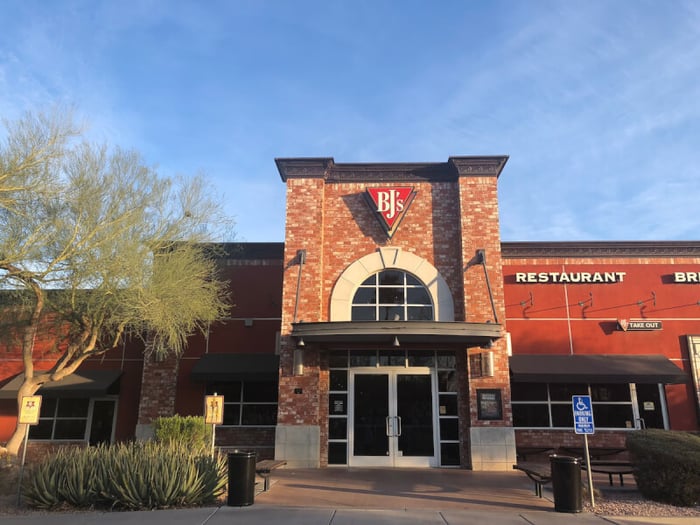 Not exactly a historical industry outperformer

When BJ's reported its first-quarter results, the show stopper was an 81.7% year-over-year comparable-sales decline for the week ended March 24. Business gradually improved to a 67.6% drubbing by the week ended May 5, and it further recovered to a 42.6% decline the week of June 9 (as some 85% of dining rooms had been reopened at that point). Nevertheless, it's an ugly picture for the sports bar chain to have to manage, and the threat of some states backtracking on their reopening plans doesn't help the situation.

That's only part of the story, though. Even though a tilt toward the previously fast-growing craft brew industry has worked in its favor, BJ's plays in a competitive space. That's reflected in the chain's comparable sales. BJ's has grown its store count over the years, but comps is an important metric that helps lift profitability. And excluding a solid run in 2018 (which accounts for the stock's good returns that year before reversing course in 2019), BJ's has put up unimpressive growth overall.

It's likely BJ's will operate at a loss (or close to one) for a while, which makes the balance sheet a key area to keep an eye on. At the end of March 2020, the company had $80.3 million in cash and $232 million in debt -- which included the full drawdown of its revolving credit facility. At the end of April, the weekly rate of cash burn was $2.5 million. Subsequent to the first quarter, BJ's sold $70 million in stock (which dilutes existing shareholders) to raise its cash on hand to $134 million.

Put simply, assuming weekly use of cash stays the same, BJ's had roughly a year of cash on hand as it was exiting the spring quarter. It's not a great situation but not nearly as desperate as some of its peers. However, the extra debt it will carry on its books means this will be a much less lean and profitable restaurant chain than it was headed into 2020 -- and it wasn't a particularly high-margin restaurant to begin with. 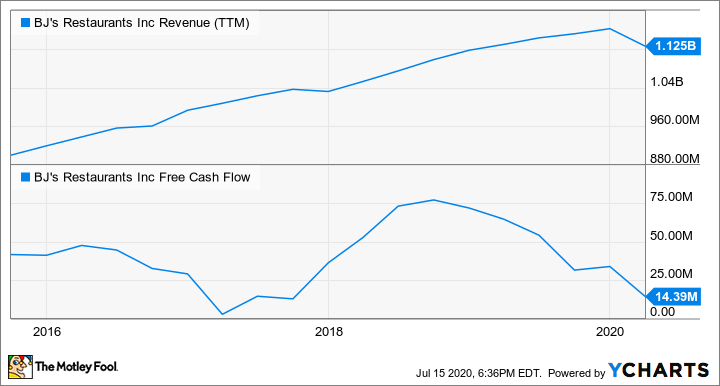 For potential new investors looking to take a position, that isn't as relevant as it is for those who owned BJ's pre-coronavirus, but it does lower the value of the business going forward. That debt will need to be serviced, which further eats into the bottom line.

Nevertheless, while I personally am not interested in buying, for those looking to make a bet on the reopening and normalization of the economy, investors could do worse than BJ's Restaurants. Just strap in for a wild ride that isn't likely to end anytime soon.