Please ensure Javascript is enabled for purposes of website accessibility
Log In Help Join The Motley Fool
Free Article Join Over 1 Million Premium Members And Get More In-Depth Stock Guidance and Research
By Anders Bylund – Jul 17, 2020 at 8:32AM

The promotion will not change Ted Sarandos' role as chief content officer, and Greg Peters' COO duties are in addition to his existing chief product officer role.

Sarandos' co-CEO title was presented as a formality to cement a working relationship that essentially started 20 years ago. The upgrade may not even boost his compensation by much. According to Netflix's proxy filings, both Hastings and Sarandos will be paid $34.65 million for their services in 2020 in a combination of cash payments and monthly stock option grants. Greg Peters' salary and stock options add up to $18.9 million. 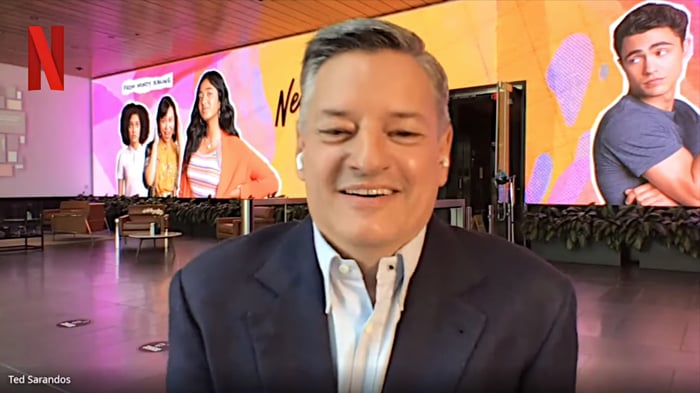 "This change makes formal what was already informal -- that Ted and I share the leadership of Netflix," Hastings said in a prepared statement.

On the earnings call, Barclays analyst Kannan Venkateshwar, who moderated the presentation, suggested that Hastings might take some more time off now that Sarandos is sharing the CEO title, but the management team chuckled at that idea. Hastings said that he has no plans to slow down or retire from the digital media company anytime soon.

"So let me be really clear on that. I'm in for a decade, OK?" Hastings said. "And as Co-CEO, it's two of us full time. It's not like a part-time deal. So it's definitely broadening the management team and helping us grow even faster over the next 10 years."