Please ensure Javascript is enabled for purposes of website accessibility
Log In Help Join The Motley Fool
Free Article Join Over 1 Million Premium Members And Get More In-Depth Stock Guidance and Research
By Alex Carchidi – Jul 17, 2020 at 9:11AM

Future success rests on demonstrating the efficacy of the company’s most promising pipeline projects.

Five years from now, CRISPR Therapeutics (CRSP -4.43%) may well be a household name as a result of awe-inspiring early results from its in vivo therapies. Today, CRISPR is already remarkable for a biotech, with $289 million in trailing-12-month revenue from collaborations and a profit margin of 16% despite having no products with regulatory approval for sale. And with nearly $890 million in cash, it's also in the unusual position of being under no pressure to get a product out the door.

So, given that there are no major financial obstacles that might prevent the company from proceeding with its pipeline projects, in five years CRISPR will probably be flourishing, if its development programs start to come to fruition. But chances are good that it still won't have any products on the market. 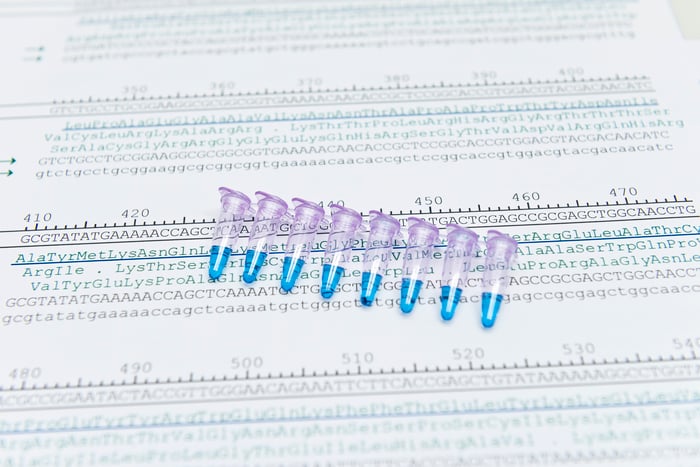 CRISPR currently has five clinical-stage cell therapy programs -- three in immuno-oncology, and two others for beta-thalassemia and sickle cell disease.

The beta-thalassemia program, CTX001, is the most advanced. It has received a fast-track designation from the U.S. Food and Drug Administration (FDA) and recently reported favorable preliminary results in a very small initial patient cohort for its combined phase 1 and phase 2 trial. The patients in the trial will be followed for at least two more years before it can proceed to the next phase. So in five years, phase 3 trials may be underway or potentially even wrapping up, giving the company a pathway to recurring sales revenue for the first time.

In contrast, if early clinical results are favorable over the next five years for its immuno-oncology programs, the company will still have a substantial amount of work to do before it can get regulatory approval for sale. Each of these programs is a cell therapy that uses the now-ubiquitous chimeric antigen receptor T-cell (CAR-T) modality, wherein a patient's T cells are isolated, engineered to the company's specifications, and then reinfused into the patient for therapeutic effect.

Of particular note is the company's CTX120 therapy, which appeared to completely eliminate highly abundant multiple myeloma cells in animal studies. But clinical results in humans are forthcoming, and far from guaranteed.

Will CRISPR's in vivo programs pan out?

In vivo (meaning "in a living body") therapies are perhaps the most compelling of CRISPR's projects that will see major development in the next five years. As the name implies, in vivo therapies aim to correct genetically defined diseases by directly editing the patient's genes using the company's CRISPR/Cas9 editing system. So far, CRISPR's primary competitor, Editas Medicine (EDIT 1.10%), is the only company that has managed to move an in vivo therapy into clinical trials.

Right now, all of CRISPR's four in vivo candidates are still in pre-clinical research, but if they come to fruition, the impact could be enormous. Patients with cystic fibrosis, Duchenne muscular dystrophy, myotonic dystrophy, and glycogen storage disease could potentially be cured or have their disease burden permanently reduced by a single treatment with one of the therapies currently under development. The market for cystic fibrosis therapies alone is estimated to be worth $14 billion by 2025, so partial or complete cures will be lucrative.

While it's unlikely that any of these programs will have regulatory approval for sale in five years, it's highly likely that the most promising programs will be somewhere in the middle of the clinical trial process, thereby generating significant attention and potential investment.

Three out of the four in vivo projects and one immuno-oncology project are collaborations with Vertex Pharmaceuticals (VRTX 2.03%), so the potential revenue will be significantly lower but also arrive significantly earlier than if the company had developed the therapies independently. Because of how substantial Vertex's involvement with CRISPR is, it's also possible that an acquisition is in the cards.

Either way, a lot is riding on the results of the company's clinical trials, especially with regard to getting validation of its in vivo therapy concepts. If it can attain this validation, the company will be on a steep upward trajectory five years from now. Look for the next batch of clinical trial updates at the end of 2020 to get a peek at how its most advanced programs are progressing. But be aware that the company has a lot of ground to cover after that before it can develop reliable revenue from product sales.