Despite mediocre financial results, could a major upcoming acquisition be what this company needs to succeed?

A few major healthcare businesses have seen their share prices fall significantly over the past several months. Elanco Animal Health (ELAN 1.33%), a $9.6 billion company that (unsurprisingly) takes care of animals' health, has seen its stock price tumble by about 20% since the beginning of 2020. To put that into perspective, the S&P 500 is about flat from the start of the year.

However, with Elanco's major acquisition of Bayer's (BAYN -0.02%) animal health business moving ever closer to receiving full regulatory approval, now could be a turning point for Elanco. Should investors stock up on this healthcare stock while it's still cheap? Let's find out. 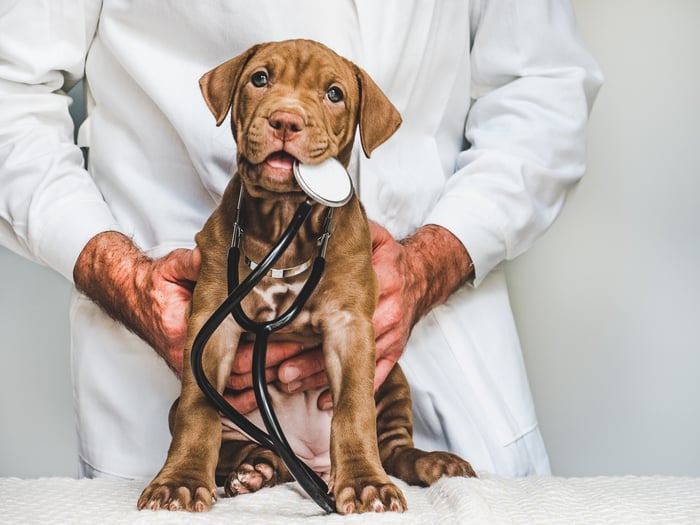 When comparing Elanco with other competitors in the animal healthcare sector, it's clear the company derives a pretty big portion of its revenue from livestock animals. About two-thirds of the nearly $658 million in revenue reported in its fiscal first quarter is from livestock/food-animal-related products, while the remaining third comes from catering to companion animals (household pets).

However, total revenue has declined by 10% from last year, primarily due to the impact of COVID-19. In addition to shrinking revenue, the company is in the red. Net losses for the quarter came in $49.1 million, substantially worse than the $31.5 million net profit seen a year ago. Even in the previous quarter before the pandemic, Elanco still reported a net loss of $9.5 million.

For a company of this size, these results aren't that great, especially since other companies in this space -- such as Zoetis (ZTS 0.48%) -- are still profitable despite everything that's been going on over the past months. However, there is a pretty big silver lining coming up on the horizon that could prove to be a game-changer for Elanco.

How big of a deal is the Bayer acquisition?

Big news for Elanco came back in June when the European Commission approved the company's pending $7.6 billion acquisition of Bayer's animal health segment. While this approval is conditional on meeting certain divestiture agreements, such as selling off the rights for a couple of well-known animal drugs (Osurnia and Vecoxan) to other companies, it's still a good piece of news for the company. At the moment, Elanco is expecting to complete the acquisition in early August.

Elanco's management has gone on to say that this acquisition will help increase cash flow to about $1 billion annually. This includes adding more than 30 lifecycle products to Elanco's portfolio, alongside a further eight major projects that are in clinical development. Total synergies from the Bayer Animal Health acquisition are expected to come in at about $300 million, as well.

Although Elanco has withdrawn its 2020 guidance due to uncertainties surrounding COVID-19, it's worth noting that animal health manufacturing is considered an "essential" service during this pandemic. As such, even on the off chance that countries around the world end up returning to lockdowns, Elanco likely won't experience much in the way of manufacturing setbacks.

The big question for Elanco is whether its Bayer acquisition will prove as game-changing as management has made it out to be. While it's definitely promising, $7.6 billion is a significant amount to pay for a company whose market cap is about $9.6 billion.

The good news is that Elanco is pretty cheap as far as animal health companies go. Its price-to-earnings-growth (PEG) ratio currently is at 3, much lower than Zoetis's 5.1. However, in many respects, you get what you pay for. Zoetis' recent first-quarter financial results showed a 5% growth rate in spite of COVID-19. That's not to mention the company's net income of $423 million.

Is Elanco a Buy?

While it might be tempting to buy Elanco ahead of its anticipated Bayer deal, I think investors should be a bit more cautious when it comes to this company. While animal healthcare is a growing industry, Elanco's declining revenue and lack of profitability are worrying, especially compared with competitors that are both growing and remaining profitable despite this pandemic. Even worse, Elanco doesn't even have a dividend to offer long-term investors.

No matter how you cut it, Elanco seems to fall short in comparison to some of the other animal healthcare companies out there. While not necessarily a terrible company, there are better alternatives out there right now for investors to consider.

This Acquisition Could Open a Whole New Market to Elanco
395%