Coronavirus programs and other products may lead these shares higher.

Shares of companies involved in the coronavirus fight have been leading stock market gains over the past few months. By this point, investors are wondering if it's too late to get in on the action. There's still time to invest -- but choosing shares depends on your investment style.

Here, I'll suggest two "safer" plays that have products on the market and the possibility of growth from coronavirus work. And for more aggressive investors, I'll talk about a riskier clinical-stage biotech company offering an investigational coronavirus vaccine and potential for regulatory approval of another product on the horizon. 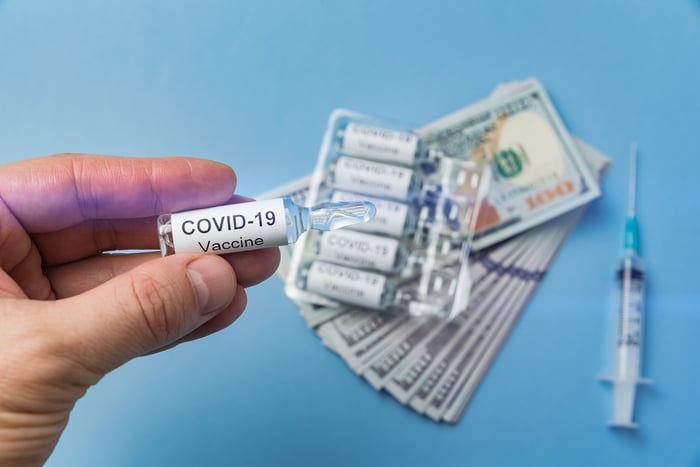 AstraZeneca (AZN -1.39%) jumped into the game later than some. The big pharma company joined forces with the University of Oxford on April 30 with an agreement to develop and distribute the latter's coronavirus vaccine. At that point, rival Moderna's (MRNA 0.06%) vaccine had already entered human testing. Now, both companies are in the lead, with AstraZeneca's phase 2/3 trial in progress and Moderna aiming to start phase 3 this month. The U.S. government's Operation Warp Speed, an initiative to advance coronavirus vaccine development, has awarded AstraZeneca $1.2 billion.

When you invest in AstraZeneca, you also benefit from 167 candidates in the pipeline, a portfolio of already commercialized products (such as blockbuster oncology drug Tagrisso), and sales growth. AstraZeneca's product sales climbed 15% last year to more than $23 billion, and in the most recent quarter, product sales also rose 15%. Total revenue climbed in all therapy areas across all regions in the quarter, and Tagrisso sales soared 56% to $982 million.

As for the shares, they fell as much as 24% between the start of the year and the market crash, but now are up more than 7% for 2020. A potential coronavirus vaccine race victory could quickly push the stock higher. A loss may not result in a huge sanction, though -- especially if AstraZeneca continues to grow sales at the current rate.

The U.S. Food and Drug Administration (FDA) granted Gilead Sciences (GILD -3.21%) emergency use authorization for its COVID-19 treatment, remdesivir, in May. The company donated its initial stock of the drug, but recently set a price and is now transitioning to selling the treatment. Gilead's investment has been steep. The company estimates it will have spent $1 billion by the end of the year. But at $2,340 per patient for a five-day treatment course, and considering a Journal of Virus Eradication report estimating it costs less than a dollar to produce a one-day dose of remdesivir, it's likely Gilead will make a profit.

There is a lot to Gilead besides coronavirus work. The biotech company's HIV drug sales are growing, led by blockbuster Biktarvy. The drug's revenue more than doubled in the first quarter, and Gilead said that in the U.S., Biktarvy is the No. 1 prescribed HIV treatment. Looking ahead, rheumatoid arthritis drug filgotinib may be another growth driver. The FDA is currently reviewing the drug and may issue a decision at any time. Gilead has already prepared for a second-half launch and hopes for approval in Europe and Japan by the end of the year.

Gilead's shares actually peaked on April 30, with a 29% gain from the start of the year. As attention turned to vaccine makers, the shares lost some steam, ultimately delivering an 18% increase for the first half. Gains moving forward might be slower than those of certain vaccine makers, but the overall path higher should be smoother.

Now here's something for the most aggressive investors. Operation Warp Speed offered clinical-stage biotech company Novavax (NVAX 10.86%) $1.6 billion, its highest award so far for coronavirus vaccine makers. Does Novavax stand a chance of winning the vaccine race, considering AstraZeneca and Moderna are further along in clinical trials? Since the story isn't just about timing, the answer is yes. If competitors stumble during trials, Novavax could move ahead. Or if another company makes it to the finish line first, but Novavax produces stronger data, Novavax's vaccine could eventually take a big chunk of the market.

Novavax is also preparing to submit its flu vaccine, NanoFlu, to the FDA for approval. NanoFlu met all primary endpoints in a phase 3 study, so there is reason for optimism. An approval likely would be a positive catalyst for the shares.

All of this sounds good -- so where's the risk? Novavax's shares are extremely sensitive to vaccine race news. The shares soared 32% in one trading session after the Operation Warp Speed funding announcement, and the stock is up 24-fold this year. If interim clinical trial data expected later this month comes in positive, the shares are likely to climb higher. However, any disappointment could produce major share losses. That's why this biotech stock is only a buy for those who don't mind the risk.