With cases surging again, this company could be deeply affected.

It's been a harrowing year for hospitals around the world. While some have dealt with an onslaught of COVID-19 patients, other facilities prepared for an influx only to see visits dry up altogether.

While the latter might sound like good news, there's a flip side: Regular visits and elective operations were canceled. This trend put a serious dent in hospital revenue, which pays for things like doctors' and nurses' salaries.

It also had a profound effect on the company I'm talking about here: Intuitive Surgical (ISRG 2.20%), maker of the da Vinci surgical system. If the nationwide surge in COVID-19 cases continues, the stock could fall. But if it does, count me among those willing to snatch up shares of this healthcare stock at a discount. 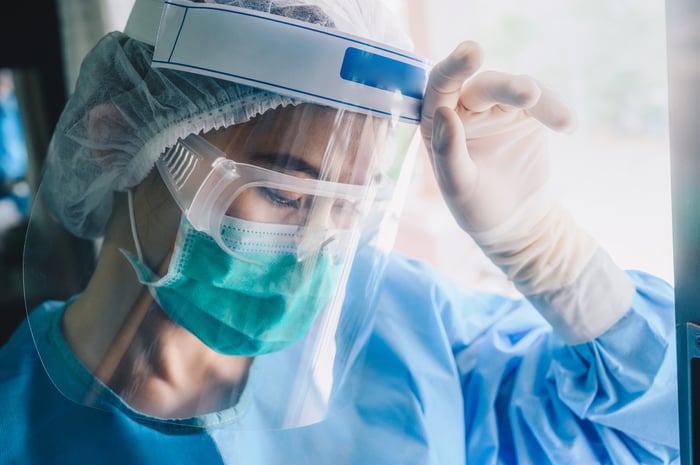 The effects are already known

Intuitive's da Vinci robots are used for a number of important procedures, including prostatectomies, benign hysterectomies, and hernia operations. These procedures are required to improve patient outcomes but usually aren't urgent. So in the case of extraordinary events, like a global pandemic, they can be delayed.

That's essentially what happened in the first quarter. During the most recent conference call, Intuitive's CEO, Dr. Gary Guthart, said, "For the first 2.5 months of the quarter, procedure performance was at the high end of our expectations." That means procedure growth was trending near 16%.

Unsurprisingly, things changed quickly. In an earlier release, the company said, "In the latter half of March, the Company experienced a significant decline in procedure volume ... in the U.S. and Western Europe." The end result: Procedure growth clocked in at 10% for the quarter. Management followed up by withdrawing all guidance for the year.

As much as we like to poke fun at Wall Street's short-term lens, professional investors are well aware of the dynamics at play: While not time-sensitive, these procedures must happen; patients are simply pushing the operations down the road a bit. Therefore, selling shares of Intuitive based on the near-term outlook seems silly.

This explains why, despite the fall-off and lack of guidance, shares are relatively flat for the year. In fact, they are just 3% off all-time highs.

The effects of a resurgence

All of that said, coronavirus cases in the United States have quickly surged once states began reopening after widespread lockdowns:

Thankfully, the curve in mortality hasn't increased by anywhere near the same amount. Part of the reason, it's believed, is that younger people are now getting the virus, and they are better able to recover.

But there are alarming trends recently in hospitals in various states:

Florida: Last week, roughly half of the state's ICUs were at 90% capacity.

Arizona: The state's ICU bed availability has fallen from 40% in mid-April to 10% this week.

Texas: The percentage of ICU beds available in Texas has fallen below the 10% mark.

As a result, several states have once again decided that elective procedures need to be paused, no doubt affecting Intuitive Surgical.

What this means for Intuitive Surgical's business

If a vaccine becomes available much sooner than thought, the fear surrounding COVID-19 would quickly fade. If developing an effective vaccine takes longer than hoped, the surge could continue for some time. So as an investor, it's best to consider a range of outcomes, with a particular focus on the downside. The U.S. accounts for roughly 70% of Intuitive's business, so the company won't be spared via international exposure.

Elective procedures could fall off a cliff, and sales of new da Vinci machines could be put on hold indefinitely. I wouldn't be surprised to see revenue fall by 10% to 20%, or perhaps more, in a worst-case scenario. Earnings and free cash flow would fall more, even with cost-cutting.

That said, Intuitive's evolving strategy toward usage-based leasing of da Vinci machines -- instead of one-off purchases -- could ease some of the pain. In the first quarter, for instance, roughly one-third of new da Vinci machines placed in hospitals around the world were via leasing arrangements.

The key takeaway: these arrangements make it less cost-prohibitive for a hospital to get a machine in the operating room. With budgets likely tightening around the world, the option creates a win-win for Intuitive and its customers.

What this means for Intuitive Surgical investors

If you're a long-term investor (we're talking decades here, folks), none of this should really bother you. A vaccine will come, and hopefully soon. If someone has a hernia that needs to be operated on, that need won't disappear. And the installed base of over 5,500 da Vinci machines isn't going anywhere.

Just as important, Intuitive Surgical can weather the storm. Why?

For the time being, the market seems to agree with me, as shares keep going up. If nothing else, this should serve as a reminder for investors (myself among them): Losing business because of the pandemic is not a reason to sell the stock.

And if the market gets irrational and starts sending shares down, I'll be willing to buy them while they're down. This company, and its long-term stock outlook, are as strong as ever.

3 Growth Stocks With More Potential Than Any Cryptocurrency
401%