Please ensure Javascript is enabled for purposes of website accessibility
Log In Help Join The Motley Fool
Free Article
Join Nearly 1 Million Premium Members And Get More In-Depth Stock Guidance and Research
By Will Healy – Jul 20, 2020 at 10:00AM

The answer may be a matter of timing.

Walmart (WMT 1.21%) continues to find a way to prosper amid ever-changing conditions. The company fought off Amazon and also held its own during a pandemic that shut down wide swaths of the world economy.

However, the question of whether this retail stock is a buy remains. Not only must it show a path to continued success, but it also needs to trade at a level attractive to new buyers. Examining both the business and the financials should yield clues as to whether Walmart stock is currently a buy.

Walmart remains a sizable presence in the retail world. In fiscal year 2020 (ending Jan. 31), the company logged revenue of just under $524 billion. That comes in well ahead of the $280.5 billion in revenue for Amazon last year. Also, over 90% of Americans live within 10 miles of a Walmart. Rather than looking at this as "saturation," investors should see this as a prime omnichannel opportunity.

Retailers increasingly see the need for both a physical and an online presence. Even Amazon has tacitly admitted this, both with its Whole Foods purchase and the opening of some physical stores under its name.

Moreover, e-commerce may have helped Walmart finally gain traction internationally. After multiple failures outside of North America, it might have finally found success with Flipkart, which is now India's second-most-popular e-commerce site. Walmart and others recently invested an additional $1.2 billion in Flipkart, and the subsidiary continues to hold its own against Amazon and increase in value.

These sales increases likely helped Walmart stock trade at a higher valuation than in the past. Its forward P/E ratio is now 26.3. This comes in significantly higher than the average forward multiple for the last five years of about 19.0. At this point, the valuation looks cheap only compared to Amazon's forward P/E ratio of around 139.

Also, when looking at pre-pandemic numbers, Walmart looks like another large, slow-growth entity. In fiscal 2020, revenue grew by only 1.8% from fiscal 2019 levels.

However, the pandemic gave the company an unexpected bump. In the first quarter of fiscal 2021, that revenue growth level rose to 9.7% from the same quarter last year when excluding currency. In the U.S., comparable sales moved higher by 10% year over year, while U.S. e-commerce sales increased by 74%. This helped diluted earnings come in at $1.18 per share in the most recent quarter.

Moreover, this likely explains the behavior of Walmart stock during the year. Like most stocks, it fell in February. However, Walmart's performance was more akin to a correction than a bear market. The stock recovered its losses relatively quickly and now trades near all-time highs. 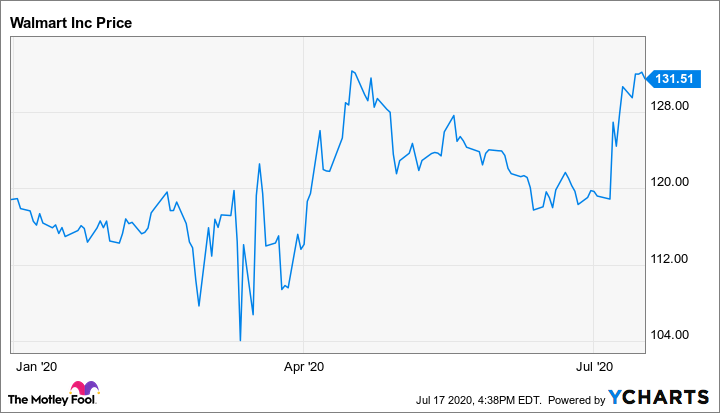 Nonetheless, some metrics point to the possibility of a temporary bump in Walmart stock instead of a sustained move higher. For one, the pandemic likely helped first-quarter free cash flow, which came in at just under $5.3 billion. In the same quarter last year, free cash flow was less than $1.4 billion.

Still, the fact that Walmart's dividend has increased every year since 1974 may allay any short-term payout concerns. Furthermore, with the dividend payout ratio of about 50.8%, the company should have no trouble maintaining its long streak of annual dividend hikes.

Walmart stock remains a long-term buy. With its becoming a force in e-commerce and the improvement of its competitive position internationally, the growth pattern should continue.

Still, the question of when to buy remains. Due to the stock trading well above historical multiples, it could easily fall back in the short term. Moreover, COVID-19 will probably not endure, and at some point, customers will go back to their pre-pandemic shopping habits. This could lead to a temporary drop in net sales, profit, and free cash flow.

Walmart will probably remain a force in retailing for years to come. However, a return to pre-pandemic activity levels could take the stock price to levels it saw before the contagion began. Investors should look for that pullback before opening a position.