World Health Organization chief scientist Soumya Swaminathan thinks there's one likely leading candidate in the race to develop a COVID-19 vaccine. That leader is AZD1222, the novel-coronavirus vaccine candidate that's being developed by AstraZeneca (NASDAQ:AZN) and the University of Oxford.

And the world now knows more about how safe and effective AZD1222 could be. AstraZeneca announced on Monday interim results from an ongoing phase 1/2 clinical study of the experimental COVID-19 vaccine. The interim results were published in The Lancet. Here are three key things you'll want to know about AstraZeneca's news. 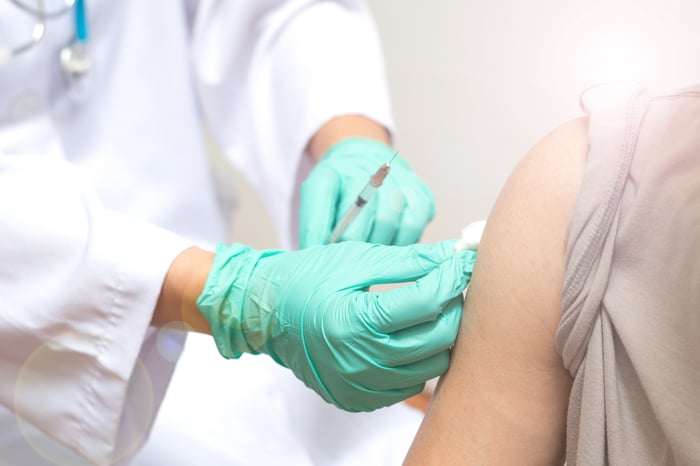 Oxford University professor Andrew Pollard, who was the chief investigator of the study, stated, "The immune respones observed following vaccination are in line with what we expect will be associated with protection against the SARS-CoV-2 virus." He added that the strong immune response observed in the participants who received two doses of AZD1222 indicates "that this might be a good strategy for vaccination."

It's usually difficult to accurately compare clinical trial results for one vaccine candidate against another. However, there's sure to be some attempts to stack up the results for AZD1222 against Moderna's COVID-19 vaccine candidate mRNA-1273. Moderna's shares soared last week after results from a phase 1 study of mRNA-1273 were published in The New England Journal of Medicine. Those results showed that neutralizing antibodies were produced in all 45 study participants after the second dose of mRNA-1273.

Another thing that researchers especially look for in the results for COVID-19 vaccine candidates is T-cell responses. T cells are white blood cells that play a key role in the body's immune response. It's possible that T-cell responses could be important in protecting against infection by SARS-CoV-2.

Although it's still not clear exactly how T cells are involved in fighting the novel coronavirus, research suggests the potential for a T-cell response as an important factor in reducing the severity of COVID-19. Previous studies have found that some individuals infected with the novel coronavirus who didn't display any symptoms developed robust T-cell response even though they didn't have detectable antibodies.

So how did AZD1222 do on this front? Very well. AstraZeneca stated that a T-cell response was induced in all participants in the clinical study. Those responses peaked by day 14 after injection, but were maintained for two months. Mene Pangalos, AstraZeneca's executive vice president of biopharmaceuticals R&D (research and development), said that the company is "encouraged" by the interim data; he especially noted the T-cell response.

3. No yellow flags related to safety

The preliminary immune response data wouldn't mean much if AZD1222 caused severe adverse effects. However, that wasn't the case.

There were no yellow flags related to safety in the interim results. Pollard said in a statement that "The interim Phase I/II data for our coronavirus vaccine shows that the vaccine did not lead to any unexpected reactions and had a similar safety profile to previous vaccines of this type."

The phase 1/2 study for which interim results were reported is still underway. However, AstraZeneca and the University of Oxford have also already kicked off phase 2/3 clinical trials of AZD1222 in the United Kingdom, Brazil, and South Africa. A late-stage study of the COVID-19 vaccine candidate will also soon begin in the U.S.

AstraZeneca is moving forward under the assumption that those late-stage studies will be successful. The company is preparing to supply more than 2 billion doses of AZD1222 to fulfill its agreements with the U.K., U.S., and several nonprofit organizations.

Even though the interim phase 1/2 results for AZD1222 were positive, AstraZeneca's shares slipped on Monday following the publication of data in The Lancet. But the pharmaceutical stock could have a major catalyst when late-stage results are announced in a few months.