Please ensure Javascript is enabled for purposes of website accessibility
Log In Help Join The Motley Fool
Free Article Join Over 1 Million Premium Members And Get More In-Depth Stock Guidance and Research
By Anders Bylund – Jul 21, 2020 at 11:55AM

The content delivery network specialist reported strong second-quarter results on Monday, but some investors demanded nothing short of perfection.

Shares of Limelight Networks (EGIO 7.20%) fell as much as 15% on Tuesday morning, following the content delivery network (CDN) veteran's second-quarter earnings report. Curiously, the stock rose as much as 11% in Monday's after-hours trading based on the same news.

Limelight reported an adjusted net loss of $0.01 per share on $58.6 million in top-line sales. That's a 67% smaller loss on 28% higher sales, compared with the year-ago period. Analysts had been expecting earnings near $0.01 per share on approximately $56.7 million of revenue, making this a mixed report.

Looking ahead, Limelight raised the midpoint of its full-year revenue guidance from $230 million to $235 million while holding the targets steady for earnings, adjusted EBITDA profits, and capital expenses. 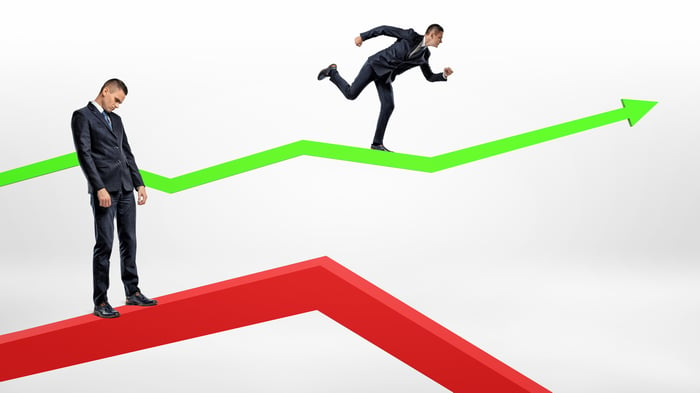 The stock headed into last night's earnings report on a full head of steam, having gained 224% over the previous 52 weeks as of Monday's closing prices. It's no surprise to see a few investors taking some of their paper profits off the table since Limelight didn't absolutely crush every financial target in sight.

At the same time, several analyst firms raised their price targets on the stock to $9 this morning. The CDN business is thriving as the media-streaming industry is going mainstream and the COVID-19 crisis accelerates the pace of this cord-cutting revolution. In other words, the big jump on Monday night makes just as much sense as Tuesday's sharp drop, and Limelight should recover quickly from this temporary correction.