$40 oil has put even large oil and gas companies under strain.

Here are two industry leaders -- each yielding over 7% -- that could face pressure if there's a prolonged slowdown in oil demand. 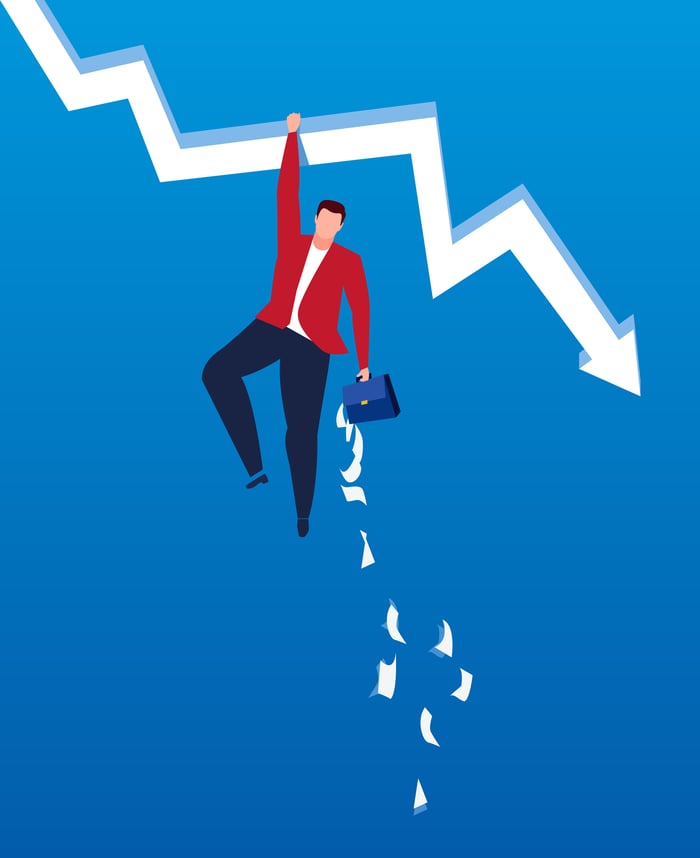 French oil and gas giant Total (NYSE:TOT) is one of the largest integrated oil and gas companies in the world.

Total hasn't decreased its dividend for more than 35 years. It had an average yield of 5.6% from 2010 to 2019. Today, Total yields 8%, but cash flow from operations fell a whopping 64% and net income fell 35% in the first quarter of 2020 compared to the first quarter 2019. Debt-adjusted cash flow (DACF), which Total tends to cite when it discusses cash flow because it leaves out working capital changes and financial charges, still fell by 31% year over year.

Total has an impressive dividend track record, but it needs strong cash flow to afford its dividend going forward. That cash flow remains uncertain in the current market. Total's decision to halt share buybacks is a step in the right direction, but its request for a scrip option on its last 2019 dividend, although approved by 98% of shareholders, may be a red flag. The authorization for the final dividend payment of the fiscal year usually comes under Resolution 3 during Total's shareholders meeting, but the dividend's scrip option means that the dividend payment is in shares instead of cash.

While receiving extra shares can be a good thing for shareholders if Total stock goes up, and a good thing for Total as a company if it can put its saved cash to good use, it doesn't bode well for Total's long-term future. Total is basically buying high and selling low by instituting a share buyback program when it can afford it and shares are higher, but diluting shares when its stock is lower and its dividend obligation strains the company's financials.

The massive decrease in energy demand and resulting oversupply was largely out of Total's control, but noticing the weaknesses in Total's dividend is in your control, and something long-term income investors should consider.

Valero Energy (NYSE:VLO) is one of the largest independent oil and gas refiners in the U.S. Although Valero is often regarded as a premier refiner, its dividend may a be cause for concern.

The model, which Valero discussed in its June investor presentation, calls for $2.5 billion in annual capital expenditures, around a 95% refinery utilization rate, high cash flow, high liquidity, and most importantly, a high dividend. It's an attractive proposition, and certainly something to strive for, but unfortunately for Valero, its refinery utilization was 90% in the first quarter, and it's guiding for around 70% in the second quarter.

Refinery utilization is the amount of actual input to refinery distillation units compared to what they can actually handle. Valero is probably making the wise decision to reduce its utilization, given there is less demand for refined products despite the lower input costs of lower-priced crude. In fact, it would probably prefer to shut some units down completely if it weren't for the costs and risks involved with restarting a facility. Regardless of how Valero plays its hand, the demand simply isn't there for the company to operate at its guided rate of 95% utilization, which will likely dampen its revenue for the foreseeable future.

The good news for Valero is that its buybacks remain modest. The company cut a mere $400 million from its planned $2.5 billion in spending. Its debt-to-capital ratio, which the company targets at 20% to 30%, was a bit higher at 34% as of the end of March. All things considered, this isn't bad for Valero, but it's not what the company hoped for.

The main risk for Valero is that it has used a lot of ink pumping up its investment proposal for stable margins and a growing dividend while also stating improved liquidity. If cash flow falls and the market remains challenging, something will have to give. Valero probably won't cut its dividend, but it could very well find itself increasing its debt load and reducing spending to a point that could hurt it in the long term.

While it's appealing that Total and Valero both yield the most they have in five years, there's reason to be skeptical. Total decided to offer stock instead of a cash dividend at a time when its stock is at a five-year low. Valero has emphasized a paradigm shift that focuses on a sustainable and growing dividend payout that is "at the high end" of its peer group at a time when its business is getting hit hard by a global decrease in demand for refined products. The danger for Total and Valero investors isn't necessarily that either company will cut its dividend, but more so in how each company's dividend obligation affects the long-term health of its business.